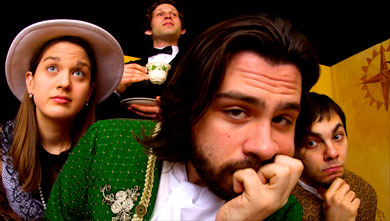 In the spirit of full disclosure, I have to admit that when I was first approached about the opportunity to see Pirate Lives! The Musical! (by David Marino and Stephen Gilbane, directed by Marino and musically directed by Gilbane), I was slightly apprehensive. I’d never heard of the works that served as the inspiration for the show, so I was basing my desire to see it almost solely on the fact that, frankly, the show’s name made it sound fantastic. Of course, I was more than pleasantly surprised. Pirate Lives! is hilarious, with a fantastic score and wonderful acting from all members of the cast.

Flat Earth Theatre‘s production begins on a set that’s highly detailed, and sets the atmosphere brilliantly. It is essentially a reproduction of a pirate ship’s top deck, with the band placed on the forecastle (for those of us who aren’t obsessed with history [and therefore pirates] like I am, the forecastle is the raised section at the front of a ship). The space is used effectively, despite being mostly full due to having a ship on stage. In most other respects, though, tech takes a backseat to the music and the script, with lighting changes being used simply and sparingly. This puts the focus solidly where it needs to be.

Speaking of the script and music, they’re amazing. The script is clever, rife with both witty word play and cues for physical comedy that make it something really special. The story itself is absurd, but in a way that makes it impossible not to love. The clashing worlds of pirates and London socialites make for great material as the story unfolds, and it never fails to deliver in the laughter department. Particularly enjoyable is Boots (Megan Goltermann), the one-eyed, one-eared, one-armed pirate who never failed to set me laughing at her myriad of requests to visit harm upon the new additions to the crew.

Musically, the show is outstanding. The music is lively and upbeat, with a mix of influences including clever allusions to sea shanties. In all, actually, the musical style reminded me a little of my favorite episode of Buffy the Vampire Slayer, “Once More With Feeling” (the season 6 musical episode). It mixed slow, soulful numbers from Amanda Darling (Monica Shea) with strong all-cast songs that I was humming the whole way home. My favorite performer, though, was Eric Rehm, who portrayed Captain Jonathan Emerald Sherry. Rehm mixes charm and flamboyance in perfect measure, adding a dash of piratey violence and a strong singing voice that made me looking forward to every time he started up.

All in all, Pirates Lives! The Musical! Is one of the best musicals that I’ve seen in quite a long time. It’s a hilarious, genre-savvy romp through the story of the pirate ship Coward* and its rag-tag crew of pirates and London upper-crust. I recommend getting your tickets as soon as you can, because this is sure to be a popular show, and rightfully so. I’m looking forward to seeing more from Flat Earth in the future, and I’m sure that Pirates Lives! will be on its way to even larger venues soon.

Oh, and a final piece of advice: when they get to the big, climactic battle, make sure you’re not drinking anything. The people in the row in front of you will thank you.

More information about Flat Earth and Pirates Lives! The Musical! can be found at http://flatearththeatre.com/.