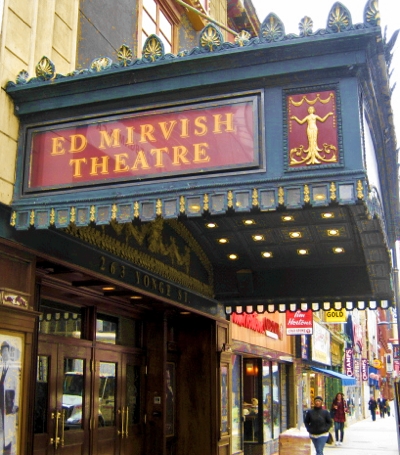 I don’t remember the last time I saw a Mirvish production that really wowed me. The Toronto titans of entertainment are known for big budget musicals and star-powered productions, but it seems like lately their light just isn’t as bright as it was in the pre-Sars heyday of The Lion King and Mamma Mia. The productions are just as flashy but they’re unenlightened, predictable and over-processed by the time they make it to Toronto. The 2007 arrival of Dancap productions marked the first major competition facing Mirvish in decades. Aubrey Dan’s theatrical passion project draws recent Tony winners, first national tours and newsmaking new works like this season’s Next to Normal and Memphis. Their tickets are a little more affordable, their demographic a little younger and overall Dancap is just a little more accessible than its more established counterpart. With such vibrant local theatres as Soulpepper, Tarragon and the Factory running at full steam, Mirvish needs to bring it in order to keep its place as the best in the business. And the latest crop of productions just isn’t doing that.

The pre-Broadway run of Noel Coward’s morally ambiguous comedy Private Lives was a decent hit for the company. With the combined star power of Paul Gross and Kim Cattrall, the show had lots of buzz, but I couldn’t help but feel like too much of the production’s weight rested on their popular names alone. The famously brassy Cattrall sizzled with the same dry wit and subtle smirk that made her famous as Samantha Jones, but her Sex and the City schtick felt tired and familiar. The charming actress seemed perfectly cast but just a little too comfortable as Amanda; she was good but left no real mark on the role. The effect of Paul Gross was largely the same. He was charming and funny but nothing special as Elyot, the ex-husband of Cattrall’s Amanda, who leaves his new young wife for a volatile tryst with his one true love after running into her and her new husband at a honeymoon resort. Said tryst played out confusingly with some excellent physical comedy and some particulary fun business involving set designer Rob Howell’s inspired fish tank. Gross, so captivatingly complex as Slings & Arrows’ Geoffrey Tennant, got lost in Coward’s stiff material. While Cattrall comfortably navigated her wheelhouse, Gross’ potential remained notably untapped in the uninspired interpretation.

Speaking of interpretation, the recent touring production of Chess that landed briefly in Toronto was nothing short of wackadoo. The already alienating score, convoluted and unrelatable plot and unsympathetic characters were enough to make investing in the show a challenge, but director Craig Revel Horwood and designer Christopher Woods’ stark, anachronistic take on the cold war drama made it next to impossible to not laugh at innappropriate times because there were grown men dressed as plastic horses battling for territory while playing the oboe. Literally. David Erik’s Arbiter was a squeakily skeezy showman while James Fox was at his absolute best when his Freddie Trumper had the rare moment of vulnerability, otherwise he was just obnoxious. Shona White’s Florence was a suitably backboned creation, though her voice lacked the oomph necessary for an Elaine Page-created role and no one else managed to catch my attention at all apart from Tam Mutu, who actually did a fairly impressive job crafting Anatoly into the only character I cared about with a charming performance as the quiet chess champion. A chorus of rambunctiously provocative chess pieces playing instruments live on stage could have been interesting had it been less unintentionally funny and the hyper stylized interpretation would have made a boring show surprising but just made Chess even less accessible. It’s not a show that needs over-interpretation, it needs humanization and the weak-voiced, superficial crazyfest that Mirvish brought to town had very little humanity at all.

On the other end of the spectrum is Mirvish’s current production, Mary Poppins. While Chess was wildly “interpretive”, with the exception of the controversial penguin exclusion, Mary Poppins is basically a scene by scene recreation of the movie. But longer. The effect is that baby boomers who grew up with the movie love the musical version and savvy twenty-somethings whose idea of “practically perfect” involves more than a pretty petticoat and diabetes-inducing catchphrases are a little more skeptical. Going into the show, any affection I had for Mary Poppins relied mostly on an unconditional love of Julie Andrews and Dick Van Dyke, essentially the most charming folks to ever walk earth. And while Bert remains a cherishable presence in the hands of the vibrant Nicolas Dromard, the legacy of the character’s creator weighs heavily; though not as heavily as it does on poor Megan Osterhaus, whose beautiful voice and capable triple threat-ness stood no chance with her merely human charm taking on a role as ostensibly unlikable as Mary Poppins. That’s a controversial statement, I know, but think about it: take the Julie Andrews factor out of the equation, what do you have left? A stuck up, demanding and self-important babysitter who spontaneously abandons her post and toys with the affections of a lovely chimney sweep who deserves better. She’s horrid, and nobody but the impossibly endearing Andrews has a real shot at making her less so. And without a likable heroine, there seems to be no point to Mary Poppins aside from nostalgic glee and the basic entertainment of the clever sets and thrilling choreography (I will admit, even I was swayed by an exuberant “Supercali…”). Rebecca Thornhill’s sweet, overcompensating Mrs. Banks was the only person I invested in (her husband is too boring, her children too annoying). Of course when I informed my (“that was a great show!” spouting) father that I thought she was the heart of the piece, he rolled his eyes and declared that I had missed the point, but I really think not only is “Being Mrs. Banks” the only interesting original song but she is the only character with a real arc that’s worth following. On a basic story structure level, Mary Poppins fails on all counts (there’s no protagonist, no villain, no rising action, hardly a climax- there’s just spoonfuls of sugar) but Mrs. Banks gave me someone to root for, meaning that Thornhill saved the show. I’m sure that for the right audience, the whole of Mary Poppins is as thrilling as her final flight through the theatre or the inspired statue ballet, but for me, despite the technical, vocal and dance impressiveness of the show, there just wasn’t any magic.

Time was, Mirvish was the company that brought a little more magic to Toronto, but the city’s been moving on without it of late. With the Canon Theatre newly re-named as The Ed Mirvish, it’d really be nice to see the light back in the Mirvish marquee.