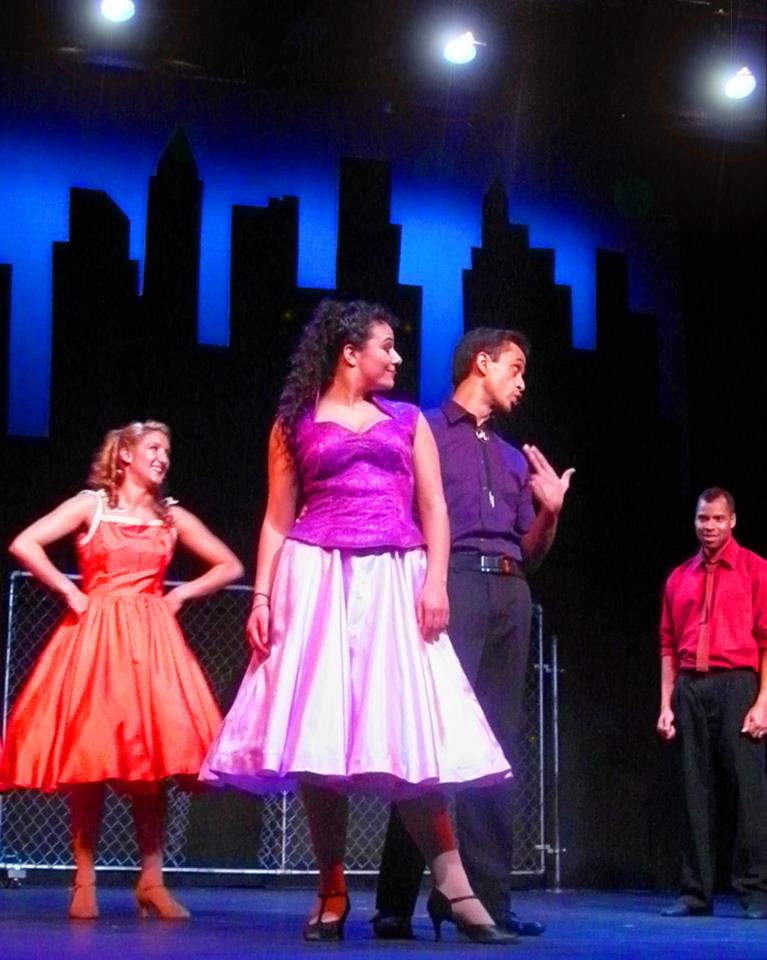 On the West Side, For the First Time

Can you believe that I’ve never seen West Side Story? Yeah, neither can I. I am a professed Romeo and Juliet fan and a sucker for faux-macho choreo, so I knew I couldn’t miss Turtle Lane Playhouse’s newest production of the ground-breaking American musical by Arthur Laurents and Leonard Bernstein (with some lyric help by my man, Stephen Sondheim). And while some of the classic songs like “Tonight” and “America” are still memorable, it’s Jerome Robbins’ choreography that truly stands out. Julia Fiske’s production is no exception, with the extraordinary talents of music director Daniel Rodriquez and, most notably, choreographer Rachel Bertone. This talented cast and crew come together to create a production full of stunning music, powerful scenes, and dancing with ‘tude.

Before I begin, I’m just gonna say- I’m not a fan of the Boston theatre scene’s tendency towards casting shows with actors beyond the reasonable ages for the characters. Pet-peeve explained; let’s move on.

The “Prologue” is particularly effective. It mirrors the traditional R&J opening but with dance. And what dancing! Turtle Lane has found some tremendous male dancers from the Greater Boston area. I was particularly impressed with Alex Nemiroski, who plays Riff, the leader of the Jets. Nemiroski leads the Jets in their anthem, “The Jet Song.” And here’s where they lost me for a while. The Jets are comprised of a particularly strong group of actors, dancers, and singers. But they seemed to lack heart on opening night. I felt like they were going through the complicated motions, but lacked the motivation for the execution. I struggled through their first few scenes though I was noticeably impressed with their dancing and singing.

Unfortunately, the prime offender for lack of heart is Matt Torrance, who plays Tony. Torrance has a soaring, beautiful tenor voice, and he looks like he was made to play the love-struck former gang member, but I can just barely forgive him for his lackluster performances of “Something’s Coming” and “Maria”. The introduction of the Sharks at the dance helped the production, though the female Sharks clearly outshone the men (more on that later). The “Dance” is sharp, fun, and exciting to watch; for the first time in the production, I felt the tension between the two factions. Amidst this turmoil, Alaina Fragoso- who does a more than capable job as Maria- and Torrance’s Tony meet for the first time. Their meeting may be one of their best moments in the production; I was impressed with how much chemistry and energy they manage to find in their silent stares. Their “Tonight” is stylistically stunning (particularly Torrance’s strong voice), but I still felt like something was missing.

Fortunately, the audience is treated to “America,” an excellent showcase for Cristhian Mancinas García- who commands the stage with his Bernardo- and Ianthe Marini- an unmatchable and dynamic force as Anita. Marini is one of the most spectacular things about this production. Her Anita is smart, empathetic, passionate, and committed to Bernardo and Maria. Her presence onstage is palpable and she engages in each moment to its fullest. My favorite scenes were between her and Fragoso because she brought out such a spark and life in Fragoso’s Maria. The rest of the act was lost in a blur for me as I was still recovering from the strong performances by the Sharks; the Jets’ “Cool” was again technically stunning, but lacked commitment from the actors, though they were again capably led by Nemiroski.

The opening of Act 2 felt like a different production. Though I disagreed with her interpretation of Maria’s “I Feel Pretty,” Fragoso was truly astounding in the number; she filled the stage with energy and warmth, the perfect introduction to the tragic second act. And then we have the number that almost brought me to my feet: “Somewhere” is a stand-out performance by the entire company, but particularly the unnamed soloist (who I can only assume is Allsun O’Malley). The number is worth the price of admission. And then, as if the company members are trying to outdo each other, we have “Gee, Officer Krupke,” a comedic number stuck in the middle of the tragic events. Matt Phillips, who plays a hot-headed and passionate Action, leads the Jets in their best and most dynamic number. The song features the best moments for the Jets, particularly from Caleb Dane Horst and Jared Green. Phillips is the star of the number, however, as he keeps the pacing strong, the energy high, and the comedy physical. And just like that, we are near the end of the musical, where the secondary characters, particularly Marini, Phillips, and Nemiroski have stolen the show from the starring roles.

Fiske’s directing is particularly strong, and I was impressed with her guidance on this classic show. Also impressive is Brian Melcher, the scene designer, who manages to create multiple locations on the small stage- the attention to detail in the drugstore set particularly stands out with touches like the dartboard, which helped the characters embody the space as their own. Like I said, West Side Story would be nothing without the talents of a capable choreographer and Bertone more than fits the bill. Her use of the original choreography with her own style and ideas, and her commitment to getting the best from her dancers is truly magnificent.

Turtle Lane’s West Side Story is a gem to see. While I’m critical of the leads for their lack of chemistry, and Torrance’s lack of commitment to the role of Tony, the secondary characters’ dynamic and purposeful portrayals of these iconic characters are particularly engaging. Fiske has assembled some of the area’s strongest ensemble members who could more than easily be playing leads in other companies, but who deliver stylistically powerful performance. I think that opening night jitters may have contributed to the lack of energy in the first act, because the second act was entirely more representative of what this company is capable of.

West Side Story plays until April 1st- go see it and be swept away into a story as classic as they come.