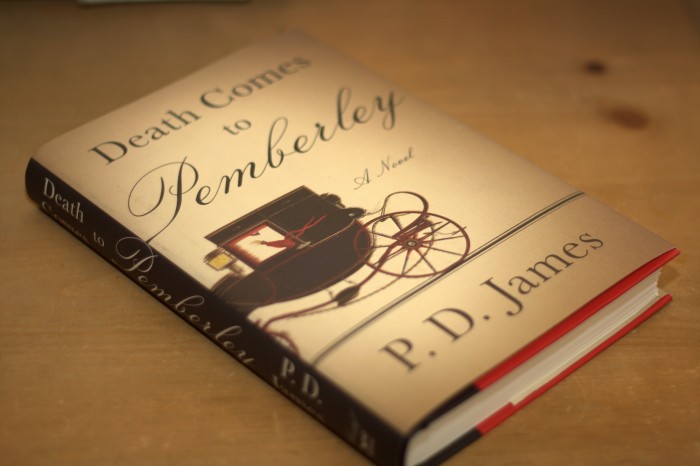 For fans of Jane Austen, like me, the publication of Death Comes to Pemberley was cause for a little celebration. The author, P.D. James, was born in Oxford in 1920, and is an accomplished and well respected writer. In her 92-year-old hands, I felt that this sequel to the classic Pride and Prejudice would be treated lovingly and well. Happily, I was right.

The story begins six years after the close of Austen’s novel; Elizabeth Bennet and Fitzwilliam Darcy have been married for six years. Fans of the original novel will enjoy the re-telling of what becomes the back story to a tale of murder and intrigue. James provides details about the lives of the principal characters that remain true to Austen’s writing, while providing some commentary on the social conventions of the time that reflect her modern views. Women’s rights, in particular, strike a nerve, as does the role of servants, and the author invests significant effort in reconciling the historical realities contained in Pride and Prejudice with more current world views. She is largely successful, and those characters who are sympathetic in the original tale remain so here.

I enjoyed the opportunity to spend more time with Elizabeth and Darcy and also with Jane and Bingley. We get to learn what happened to Mary, Kitty and Lydia, Mr. and Mrs. Collins and many of the other people who populated Pride and Prejudice. The story in Death Comes to Pemberley also provides a mystery, and in the tradition of P.D. James, the mystery surrounds a murder, involving Lydia and her no-good husband Wickham and Wickham’s friend Captain Denny. There are certainly surprises in the unraveling of the mystery, and there are red herrings aplenty, though unlike most murder mysteries,  the most enjoyable part of the book was not solving the crime. Whether you are a fan of murder mysteries or not, if you are one of the legions of readers who love Jane Austen, run, don’t walk to the bookstore to check out Death Comes to Pemberley.