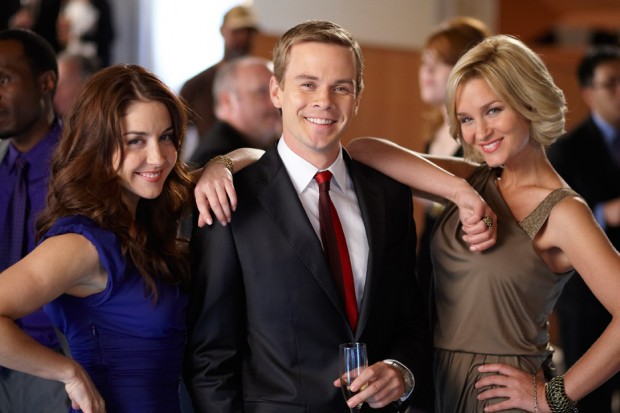 Before we announce the winners of the 2011 My TV Awards, we’re proud to present the My TV Nominee Interview Series.

A standout player on Canada’s best TV show, Morgan Kelly is best knows as the ever-evolving Brent on Being Erica, where he played the friend/rival/victim/love interest of Erica and her book publishing boss/partner Julianne for four seasons. Now that the series is over, Morgan took the time to answer a few questions about his career and its defining character so far, Brent.

How’d you first get into acting?
I stared acting when I was in my early twenties. I was in University taking a computer programming course to make my girlfriend’s parents happy. I was miserable. My best friend, who had just started to pursue acting, brought me in to meet his agent and the rest is history.

How did you land the role of Brent?
The role of Brent actually came up unexpectedly. I had previously tested for the role of “Ethan”, Erica’s love interest in season one, which I obviously didn’t get. A few months later I got a call to audition for this other character called “Brent”. I auditioned on a Thursday and found out I got the part on Friday and started shooting on Monday.

You started out as a funny sidekick. Then a villain. Then a love interest. What’s been your favorite incarnation of Brent?
Given the choice, I always prefer playing the love interest, although playing the bad guy is also a lot of fun.

I love the complexity of his ever-changing relationship with Julianne. Was that all the writers or did your chemistry with Reagan Pasternak influence it at all?
I knew early on after talking to the writers that Brent had a thing for Julianne, although at the time I’m not sure if even the writers knew where it would lead. Throughout the seasons I tried to show Brent’s infatuation with Julianne in subtle ways, always hoping Brent would get his girl at the end.

Brent was, at times, deliciously evil. Did you revel in the fun of it or always try to humanize him?
I always try and humanize my characters. If my character is acting a certain way I need to know why he’s doing it and then justify it or I feel no one will believe it. In the case of Brent being evil with Julianne, Brent was coming from a place of hurt. To be honest, (at least from Brent’s point of view) Brent was screwed over at work when the woman he secretly loved promoted someone over him (Erica). When you look at it that way, Brent reacting the way he did doesn’t seem so extreme…maybe I would’ve done the same thing in that situation, who knows?

Brent was a character who was largely separate from the show’s central mythology, do you wish you’d gotten an epic time travel experience? When would you have liked to have gone?
I would have LOVED to have an epic time travel experience. Later in season 3 it was revealed that Brent was a model when he was younger. I always thought it would’ve been funny to go back to Brent’s modeling days.

What are some of your favorite other projects you’ve worked on as an actor?
One of the first things I ever did was a series lead on a kids show called Fries With That. Very low budget, and we had to memorize 50 pages a day with the hectic work schedule but it was by far the most fun I’ve ever had on a set.

What would you consider the highlight of your career so far?
I would have to say the highlight of my career would probably be Being Erica because it forced me to get out of my “safe zone” and try new things.