Being Erica in Season Three 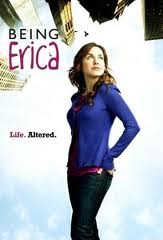 I’ve long loved CBC’s most successful drama. When it first premiered 3 seasons ago I was fond of its proud Toronto setting and unabashed Canadian sweetness. It was easily one of the best things ever to come out of Canada’s small TV market. But as I caught up on the most recent season (which aired in the fall) I came to realize that Being Erica isn’t a highlight of my Canadian TV intake anymore, it’s a highlight of the entire landscape. With season three, the quirky show expanded its mythology, deepened its characters, broadened its ensemble and stepped up to truly rival its American counterparts for the first time since it began.

First off, moving Erica deeper into the process of her therapy was an inspired move. Group therapy proved fun and full of possibility; delving further into the mythology around Erica’s journey makes her story more palpable, more relatable and ultimately 10x more interesting. The ‘individual therapy–group therapy– doctor’ progression opens lots of great doors heading into the show’s fourth and final season: we now know characters in all levels of the system and have more insight into the hierarchy of doctors we’ve only been given glimpses of up to this point (Tom, Fred, Naadiah, Arthur). The forward momentum keeps the show fresh but always linked back to its original premise. On a character level, season three proved to be a feast of new characters and returning favourites. As much as I loved Ethan, it was well past his time to go and the closure provided by seeing Claire again was the perfect farewell to him, his arc and what he meant to Erica. In semi-related romantic news, Adam is an excellent addition to Erica’s life. Adam Fergus’ particular brand of sexy bad boy-ness isn’t usually my cup of tea, but there was something about his well-meaning screwed up ways that won me over. The wonderful complexity of the moment when he tells Erica he doesn’t have feelings for her was just the tip of the awesome Adam iceberg. 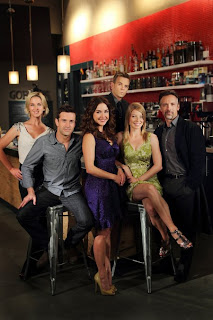 Then there’s Lenin, Sam’s new love interest, the anti-Josh. Despite the stupid name,  he’s sweet and charming, not terribly complex and a lovely undramatic force in the show (and especially for Sam, who it’s about time found someone to actually love her). The Strange parents also had an excellent season. Scared by Barb’s brush with breast cancer, she and Gary reunited in a strangely beautiful way- a tad unrealistic but completely welcome. Kathleen Laskey and John Boylan have a wonderfully unique chemistry so reuniting them was excellent.

My beloved Kai also made a reappearance in season three. The rockstar from the future has always meant interesting things for the show’s mythology and this time was no different. He returned twice: first to warn Erica that she might be dead in 2019 then to deal with a different regret and throw her a very welcome romantic curveball. Here’s hoping for even more guest spots from Sebastian Pigott’s soft-spoken charmer in season four.

Another returning favourite was season one’s Cassidy who reappeared for the super wonderful episode set around Toronto’s annual Pride parade. Adorable couple Dave and Ivan also took on a more central role this season, taking over Goblins Espresso Bar and becoming the landlords to Erica and Julianne’s new company. Their fun B stories were consistently touching and achingly human as one of the show’s most believable couples- relationship insecurities abound! 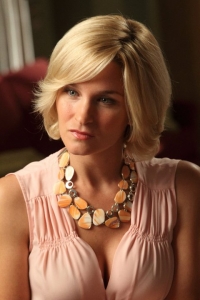 Of the many returning cast members, however, there were three whose roles really shifted this year. The first was Dr. Tom, whose personal story didn’t unravel significantly from season two but who took a bit of a backseat in Erica’s therapy (as she moved on to group) and became more of a character of his own, instead of a symbol of Erica’s journey. The next was Brent who enjoyed a truly brilliant arc as the remarkable Morgan Kelly got to play everything from bitchy to butch to genuinely remorseful over the course of the season.

But the most potent character shift was for Reagan Pasternak’s Julianne. The formerly antagonistic blond started a new publishing house with her ex-assistant this season after she was spurned by the company she’d made her name at. Ever deepening while never losing her perfect comic timing, Julianne has quickly become a highlight of the series. This season we saw more and more dimensions of the perky, ambitious and fiercely loyal character- the complexity of her family dynamic that was revealed in the Christmas episode was perfectly suiting and perfectly humanizing.

Season three moved Erica and everyone around her forward in wonderful ways. It developed mythology, broadened the world and deepened the characters- what more could you want?

In: Being Erica, Canadian TV

2 Responses to Being Erica in Season Three