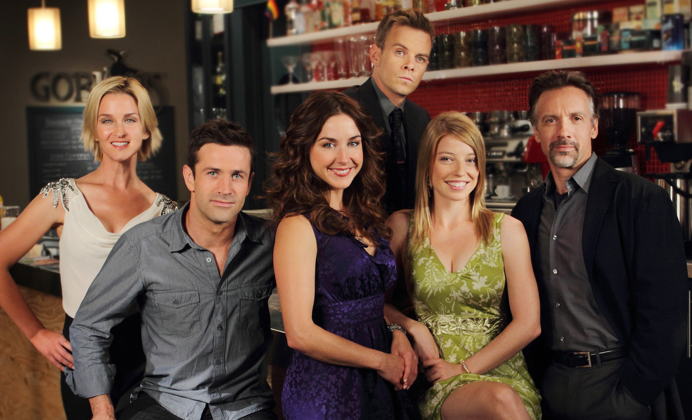 Canada’s best show is almost through its fourth (and potentially last) season on the CBC. So before we bid adieu to Being Erica for good, I thought I’d better make a point of catching up with the time-travelling spitfire and her heartfelt wacky adventures. *caution, spoilers ahead*

Season four so far has been pretty up and down. Sam’s pregnant so overdramatic, not a good colour on her, but I really like Lennon, her opposite-of-Josh boyfriend, so he’s been a calming influence on the strange Strange household. Erica’s mother enjoyed a major episode and while I’m generally a fan of the Strange parents, the far-fetched 6os-set story just didn’t gel.

But one of the best episodes of the season was dedicated to the familial; in the season premiere, doctor-in-training Erica’s first “patient” was vilified ex-brother-in-law Josh. Adam MacDonald, who’d been playing a very mildly layered bad guy for 3 seasons on the show, pulled out all the stops for an episode that forced the perpetual tunnel visioned Erica to try and see things from Josh’s perspective. The result was a perspective I never expected from the sometimes one-note happy show, a star guest turn from MacDonald and one of the best episodes of the season.

Speaking of doctor-in-training Erica and her “patients”, one thing I’ve always loved about Being Erica is how willing the writers are to mess with their formula. Seasons one and two featured variations on Erica-in-training stories wherein she learned a lesson by going back into her past to fix a thematically linked regret; season three introduced group therapy as the next step in what we learned to be the path towards becoming a doctor (ala Tom, not the actual kind). Season four promised Erica’s formal doctor training, presumably either ending the series with her certification or setting up for a season five starring Doctor Erica.

The idea is great, but in execution the setup seems strange. Erica’s still learning a lesson a week and it is quite refreshing to see her have to learn that lesson through helping someone other than herself, but the way she’s “treating” her current patients (people she knows who have no idea about her therapy) has nothing to do with how she was treated (and presumably will be treating others some day). She’s not examining their lives, sending them back to address regrets, guiding them to the right conclusion; she’s mostly using them as a framework for dealing with her own regrets. The mythology (which got a wonderful rabbit hole-related boost in the most recent, exposition-heavy episode) isn’t being helped by this stage of Erica’s development, and the formula isn’t being challenged the way I thought it would either.

In terms of actual storytelling, the series is jumping around a bit as well. Last season’s slow-burn love interest (the show is good about developing chemistry before sending characters in head first), Adam, proved an annoying and ill-suited boyfriend and was kicked to the curb by episode six. Meanwhile, a one-episode stint from the one-time massively important, now pretty arbitrary character of Ethan helped Erica realize how much she didn’t want Adam back (a necessary conclusion, even if that being his major function served to marginalize how very close Ethan and Erica had been all those years before their ill-fated relationship, not to mention the importance of that ill-fated relationship). The re-introduction of Kai was a welcome twist, him being the character whose presence always moves the mythology forward more than any other. And I do love Sebastian Pigott (why, I’m not quite sure). But the chemistry between him and Erica isn’t quite potent enough to sell the passionate story they’re currently peddling. The consequences for the time-space continuum, however? Superb. And the life-altering revelation about Erica’s 2019 future Kai brought with him to 2011 has made for an interesting black cloud that’s lain over Erica’s head since he first hinted at it last season. I very intrigued to see where the rabbit hole time travel theory goes from here.

Over at Goblins and 50/50, the supporting players are still a major highlight of the series. Bar/cafe owners Dave and Ivan are consistently bringing the laughs as they plan for what I’m sure will be the wedding of the century. 50/50’s hired a new assistant, a comically enthusiastic psychic whose been getting just enough screen time to steal the occasional scene but not enough to grow tiresome. Julianne is still my favourite character in the series with her bizarro syntax and cutthroat cheerfulness; an episode that delved into her insecurities about her sister’s achievements really showed off Reagan Pasternak’s wildly underrated chops (as do her occasional forays into karaoke and open mic performing). I’ve also always been a massive fan of Brent, the sassy River Rock employee who spent much of the last three seasons plotting to take Julianne and Erica down. The rich inner life that actor Morgan Kelly created for the surprisingly straight character right from the get go is finally paying off as Brent reappeared this season to make amends and eventually land a job with 50/50. His quiet love for Julianne (which Kelly’s played wonderfully subtly for years and has lived at the back of my head as a pipe dream for the character) is also coming to a head in what is shockingly the most riveting relationship the show’s ever portrayed. They’re great and complicated and full of years of pent-up friendship/hatred/longing issues, but apart from their heartfelt excellence, they’re an incredibly hot couple, far surpassing any sizzle factor in Erica’s major dalliances.

On the doctor front things are a lot slower. There’s some sort of unbalanced romance thing happening with Doctor Tom that we’re supposed to take as a realistic metaphor for his greater flaws- it’s mostly falling flat. Though the expansion of Doctor Naadiah’s role was a welcome one; our quick tour of her life- house, job, wife, daughter, dog- was pretty sweet and her calm, fuss-less presence has proved crucial next to Tom’s skittish unravelling and Erica’s anxious energy.

Overall, season four has taken Being Erica‘s mythology to promising places, and that alone (and the Brent/Julianne awesomeness) is just plain exciting. Here’s hoping CBC turns around and gives us an unexpected 5th season when this one comes to a close.