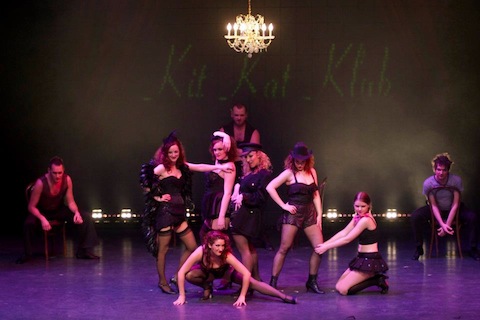 Life Is a Cabaret, Old Chum

Going into Woodland Theatre Company’s latest production, I was delighted to get the opportunity to see Cabaret; though a fan of Liza Minelli and Joel Grey, Alan Cummings, and Michael C. Hall, I’d never seen this classic of American musical theatre. Unfortunately, the company’s attempts to mount an engaging production misses the mark in numerous places. Even as an uninformed newcomer, I felt like something was off about the performance, especially from some of the leads. Unfortunately, even particularly strong performances by the supporting characters couldn’t save this show from ultimately seeming pedestrian and, dare I say, high school-like.

Woodland Theatre Company recently began performing in the spacious Lowell Mason Auditorium in Medfield, and this venue may be the company’s first mistake. Cabaret feels expansive and aloof on this stage, and the minimalist set seems almost piecemeal. I felt like Cabaret may have been the wrong show for the space, and the space created a disconnect between the production ideas and the audience. I’d love to see their summer production of Guys and Dolls because that show may be better suited for this large, proscenium arch theater.

But the space isn’t the only hurdle for this company to tackle. Almost from the beginning, the Emcee (Evan Murphy) seems lost in this androgynous, sexually ambiguous, morally lax character. He makes a solid attempt to perform the role with gusto, but he fell flat. With big suspenders to fill, Murphy tries to incorporate the legends who idealized this role, but he fails to bring anything new to the Emcee, a dynamic actor’s dream role in musical theatre; Murphy seems afraid to create the wonderful moments of reprehensibility and charm in his portrayal. Luckily, he does have a knack for humor, and shows extreme breadth in his comic timing and range. I wasn’t ever clear on the importance of the Emcee though, and while Murphy delivers efficient line readings, he never gives the character any real sense of purpose.

Unfortunately, the same criticism can be applied to other cast members. The biggest hiccups are Herr Schultz (Kevin Groppe) and Ernst Ludwig (Woody Gaul). While Groppe has delectable chemistry with Fraulein Schneider (Veronica Wiseman – more on her show-saving performance later), I never felt empathy for Schultz, a key component to the end of Act I. Gaul is charming, but one-dimensional; I felt like the actor was more commenting on the role rather than playing the role moment-to-moment. I’ll admit that a more Brechtian approach could be applied to Cabaret if all of the actors commit to this style. Unfortunately, I felt like the weaknesses stemmed not from creativity but inhibitions.

Sarah Beling delivers the most complex performance as the dynamite cabaret performer Sally Bowles. I didn’t understand Beling’s interpretation of the iconic role until late in Act II, but, boy, when Beling sang the title song, “Cabaret,” I was floored with her nuanced and creative interpretation of Bowles. From the beginning, Beling shows us a quirky performer with a pushy personality and few inhibitions. Impressively, Beling’s Bowles is always performing; for her, life is a cabaret and she hides behind this show until tragedy strikes. Her “Cabaret” is subdued, defenseless, and raw in its goodness. I drew strong parallels between this rendition and, ironically, Cathy’s “Climbing Uphill” from The Last Five Years. Both characters show their limitations as performers and people in these numbers, and I couldn’t ask for anything more from the talented Beling. I was almost willing to throw up my hands with the performance until this number because her Bowles was that annoying and in-your-face, starting first with her British accent that falls into a steady rhythm of cheeky remarks and seductive advances. However, in retrospect, how delightful that this Bowles is really performing for Cliff and us.

Cliff Bradshaw (Kevin Parise) is a difficult problem to reconcile. The role is unglamorous, especially by musical theatre standards. In fact, Cliff seems to rely solely on carrying the moral compass of the show, a herculean role for any actor. Unfortunately, Parise never quite rises to the challenge, choosing instead to take the middle of the road. What starts off remarkably good in tone and chemistry quickly dissolves into monotony. Luckily, his scenes with Beling late in Act II are some of the best in the show with moment-to-moment intentions.

The best scenes, however, are between Fraulein Schneider (Veronica Wiseman) and Fraulein Kost (Jackie Theoharis). Theoharis is truly remarkable in every role (A My Theatre Award nominee this year for Spring Awakening), and she lives up to her billing in this small role. Wiseman and Theoharis have a polished chemistry and interaction about them that shows their characters have a long-established, antagonist relationship. Their finest moment is their mutual understanding of each other. The themes and ideas of Cabaret are displayed perfectly in the rich and developed characters that these two actresses create in their performances.

The ensemble, however, is painfully forgettable. Their musical numbers are clean, but they’re also boring and they lack energy. The only truly impressive musical performances come from Beling and Theoharis, with a strong effort by Wiseman in “What Would You Do?” The rest of the company comes off with a high school level of commitment and energy, with a notable exception by Gillian Gordon; her dancing and character are fierce, while she is unfortunately under-utilized and miscast as Helga.

Woodland Theatre Company delivers an admirable attempt at Cabaret, but the production lacks a spark or purpose. With themes that resonate even today, I expected more from the shocking and bold ending of the musical. Still, the powerhouse performances by Beling, Theoharis, and Wiseman are clearly worthy of appreciation and attendance. While I was unimpressed with the show overall, the credentials of the company and its production team is impressive, implying a greater potential. I hope to see future productions, including their summer production of Guys and Dolls and fall production of Into the Woods.