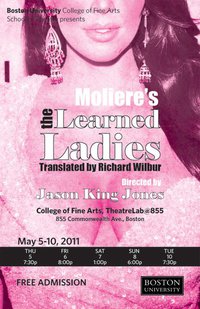 This spring I had the privileged of seeing many of Boston University’s School of Theatre productions. If you read this blog regularly you’ll have read my accounts of the all-female Julius Caesar, the award-winning original play Fallujah, the student/professional collaboration Walking the Volcano and the fascinating thesis projects from the senior Theatre Arts majors. Still to come is a review of one of the CFA season’s biggest ventures: Hedda Gabler at the Huntington Theatre.

In general, the work coming out of CFA is remarkable- notably and appropriately stronger than the work of BU’s extra-curricular theatre ensembles. These are the kids who are doing it, throwing themselves head first into the painful, thankless and draining life of a theatre professional. And none of them seems to mind that reality one little bit, because they clearly love the work. Nothing made this clearer than my favourite CFA production of the year, the clever, vibrant and satirically wonderful romp that was Moliere’s Learned Ladies.

Wonderfully set in a modern dystopia of Real Housewives-ness, CFA’s Learned Ladies took Moliere’s sparkling text and Richard Wilbur’s pitch-perfect translation and turned it into the modern intellectual’s (hysterical) worst nightmare. Director Jason King Jones hopped the play up on estrogen- turning it pink and making it sparkle, then mocking it for those qualities. He went too far with David Keohane’s Vadius, an absurd live-action Pepe Le Pew, and walked a very thin line with exuberant takes on Belise and Trissotin, but his trademark energy and theatrical bravery really set the play and the talented ensemble spinning in fantastic directions.

The cast, as a whole, was fantastic. Ross Neuenfeldt’s neurotic (and hungry) Chrysale was my favourite- an overcome and overwhelmed failure of machismo whose every attempt to put his foot down resulted in a showcase of comic timing. Molly Herzog proved another gem as the no-nonsense Martine. Armed with a thick-as-chowda Boston accent and balls-to-the-wall bravado, Herzog made a servant the star of the show every time she was on stage. Insisting she was the real star of the show was Chelsea Kurtz’s fantastically obnoxious Armande. With a Snooki-poof, prop “intellectual” glasses and a condescending attitude, she was so horrifying (and alarmingly familiar) that you couldn’t help but love her for it. Lauren-Claire Poitevent and Alex Morgan were wonderfully in tune as young lovers Henriette and Clitandre, believable as the sane glue holding the whole clan together and just charming enough to sell the story. Among the few over-directed characters, Amanda Mason had some great moments and some screechy ones as Philaminte, and Lizzie Bassett gave one of those performances as Belise that convinced me she was very talented but made me want her to leave the stage and come back in a different part (in a lower-key play). The concept behind Alex Schneps’ hipster Trissotin was brilliant- a pretentious, esoteric idiot as charming as he is fraudulent. The moments when he went too far with it detracted somewhat, but the aggravating truthfulness of the interpretation held strong. Fahim Hamid, Georgia Zildjian and Julia Schonberg filled out the ensemble alongside Caroline Cleary who, in a tiny part as a Notary, quickly reminded that she’s one of the school’s standout younger talents.

JiYoung Han’s set fit the mood of the piece beautifully, and hilariously, and all sorts of other excellent adverbs-ily. Jay Zawacki lit the whole thing with the gaudy gusto it required and Tim Spears provided the perfect soundtrack. Emily Astorian dressed the excellent ensemble to be as icky as can be, all trashy New Housewives “glamour”- the final (all important) piece of the gross puzzle of excess.

And as fun as it was to laugh at the excesses of the learned ladies, the piece wouldn’t let the modern audience slip away without planting that evil seed of doubt about who we were really laughing at. As I sat there in that beautiful University theatre, next to my friend- me in dark-rimmed glasses, her with green hair, tossing about Shakespeare references at intermission-, I began to worry that I might be the absurd Trissotin, or worse: one of his frivolously learned followers. The whole theatre- college students with few practical skills- sat together and laughed at the expense of the presented reality TV demographic while high on our horses of “Oh Moliere, isn’t he CLEVER”. It’s a terrifying thought, and one that I’m sure Jones and his company wanted us to have amidst the sparkly pink fun of the farce itself. But self doubt’s never been so fun.