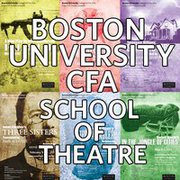 In the early weeks of May, as school came to an end for Boston University’s senior Theatre Arts majors, the performance spaces at the College of Fine Arts were filled with thesis projects. This year’s STAMP (senior theatre arts thesis productions) entries included Steven Adly Guirgis’ raucous Judas Iscariot, Phillip Berman’s The Last Confession of the Virgin Maria and a double bill set of adaptations called HMLT/AGMMNN 2.wtvr. The line for the final show of Virgin Maria was out the door so I unfortunately missed out on that one, but read on for my thoughts on the other two projects:

Judas Iscariot, directed by Sam Kikes and Sophie Simpson, wasn’t at all what I was expecting. Based on the title, the bare set, the intense “notes from the ensemble” and the morose opening scene, I was expecting a dark, somewhat dreary and ultimately artistic piece more in keeping with the experimental and heady connotations of the world “thesis”. What I got instead was a sort of artistically-minded farce, a confused and over-stuffed comedy that was balanced precariously on a foundation of truly excellent ideas that fell down in execution.

Guirgis’ play proved both too ambitious and not good enough for this young but talented company.
About an hour too long (the whole exercise clocked in at about 2:45), the unbalanced script contained far too many characters (many company members being double or even triple cast) and relied on an array of broad jokes and shock value moments to make its point. And for the most part, the audience was on to that fact- an unfortunate Charlie Sheen joke received little more than awkward titters. The piece as a whole seemed tonally unbalanced, unsure whether to dive wholeheartedly into farce or to attempt the uphill trek back up towards great depth. The opening scene featuring Judas’ mother (Mary Budzn) and an ending one wherein Jesus (Jessica Uher) lectured poetic were too intense for the rest of the piece, or the rest of the piece was too ridiculous for them- either way, they seemed removed from the action.

But with their talented company, Kikes and Simpson did manage to carve out quite a few wonderful moments.

Simpson herself actually stole the show as a terribly sassy Saint Monica. As the woman at God’s ear, Simpson took what could have been a cartoonish (albeit hilarious) character and played her for every possible ounce of truth, a remarkable feat. One of the other most notably human portraits came from the superb Matt Ketai. As Butch Honeywell, a character who seems to serve very little purpose in the play, Ketai delivered one of its most potent speeches. As the mostly silent title character, Todd Siff was very good, as was Maggie Erwin as a broad Mother Teresa but more so as the wonderfully chipper angel Gloria. Anna Lenes fared alright in the crucial role of defense attorney Fabiana though her passionate thundering began to wear after awhile, as though she’d done too much character study by watching old Tom Cruise movies. In a stroke of genius, the directors cast the uber-buff Mat Leonard as an over-grown baby (Matthias of Galilee), a performance that left the audience in peals of laughter, while Simon Pringle-Wallace’s gangly Bailiff entertained as a rare subtle comic in the play (his smooth transition into Simon the Zealot also impressed). Sam Coughlin was a personal favourite as the Judge, Saint Matthew and Caiaphas the Elder, all roles that he differentiated well. And the final standout performer was Monica Flanagan, as the fantastic yet tragically over- written Satan. A fascinating character armed with an outstanding performer, Satan quickly became one of the play’s most interesting features- except when she was pushed too far.

Ultimately, Judas Iscariot was a play brimming with talent and artistic potential in desperate need of an editing eye.


HAMLT/AGMMNN 2.wtvr, on the other hand, was far less broadly entertaining but was all about the artistically heady “thesis”-like experimentation.

HAMLT, directed by Chris Junno, was essentially a re-arranged production of Shakespeare’s Hamlet, boiled down to its most essential elements and played in a somewhat enlightening and somewhat confounding order. Marion Le Coguic was sensational in the title role. Unlike many women cast in male roles, Le Coguic didn’t seem at all burdened by the gender swap- she didn’t change the character to female nor did she force too much male coding onto herself, rather she simply played Hamlet for all the character’s neurotic, selfish and unsure complexities, not for his gender status. The effect was nothing more or less than one of CFA’s strongest actors getting a shot at one of the world’s most coveted roles, with none of the bullshit roadblocks modern companies seem to care too much about. As for the rest of the HAMLT company, they varied from unremarkable (Becca Sands as a similarly gender-free Claudius, Danny Park’s standard Laertes) to endearing (Nathan Wainwright, sweet and funny as Polonius and in other varied roles, and Casey Hayward as a delicate Ophelia) to subpar (Ali Kerestly’s Gertrude didn’t hit a single note I liked the entire play). Junno’s direction proved simple but effective and imaginative, a production I would have enjoyed to see expanded from HAMLT into a full-scale Hamlet.

After intermission, Le Coguic transitioned from star to director as her AGMMNN 2.wtvr took the stage, featuring the exact same company of actors + Junno in the role of Homer. I was less thrilled with this adaptation when it first began; springing from Chuck Mee’s Agamemnon 2.0, it was an adaptation of an adaptation of Aeschylus’ Agamemnon and much of Le Coguic’s staging seemed to have taken the text on a detour through a stale Beckett play. I 180-ed upon Agamemnon’s entrance, when Nathan Wainwright, so silly and subservient in HAMLT, grabbed hold of the play, refusing to relinquish it until he lay in a pool of blood on the stage. As he thundered through the role (in the best sense), Wainwright completely overran his Clytemnestra (Casey Hayward), a very small girl who’d seemed much more at home as the heartbroken ingenue she was before intermission. I was torn, then, when Hayward pulled out her powerful side in the play’s final moments- was it unbelievable or just the right amount of underestimated surprise? The jury’s still out. The highlight, however, was an unparalleled delight after her disappointing turn in HAMLT. Ali Kerestly completely blew me away in AGMMNN with a heartbreaking, quirky and full-commitment turn as Cassandra and Herodotus. The key really is casting and Le Coguic, it seems, knew exactly where to put Kerestly to bring out her absolute best.

HAMLT/AGMMNN 2.wtvr was a fascinating experience. The same company under the direction of two different visions showed more facets of themselves than you’d expect to find. Chris Junno and Marion Le Coguic to varying degrees brought out the best in their five collaborators and in each other, making for two engrossing pieces of theatre.