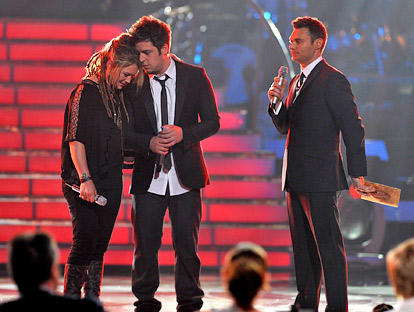 I realize I have fallen behind on the many many things happening in the TV world right now. It’s finale time, which means it’s My TV Season Wrap-Up time so my plate is quite full of writing to be done. In the mean time, in case you haven’t been following @MyEntWorld on twitter (which you all should), I thought I’d get you caught up briefly on where I stand on the TV issues of the moment:

The Survivor and Amazing Race Finales: in both cases the wrong person won and the most deserving competitor took second. As much as I would have liked to see Caite win the race and throw it in the face of all the snobby pseudo-intellectuals who teased her, the title should have belonged to the cowboys, who ran the most consistently impressive race. As for Survivor, the finale was fun because Jeff was super snarky with bitter Russell but the only reason Sandra should have won was if she had actually succeeded in taking Russell out when she tried. This was Parvati’s season, she played the best game and really should have had it.

The Lost Finale: I’m generally pro, though I understand why the mythology-oriented fans are left disappointed. It was an emotional, character-driven, spirituality-heavy farewell and if that’s not your Lostian focus then you couldn’t have been happy. As for me, a super sap who’s all about character over plot, I loved that it got me emotionally reacting to Lost again. Despite solid writing, excellent effects and superb acting, the MVP award goes to composer Michael Giacchino for creating iteration after iteration of his iconic “important emotional moment” music for the episode’s record breaking number of important emotional moments.

NBC Thursday Finales: Community offered its weakest episode yet (read Rachael’s Season Wrap-Up for more, all of which I agree with), 30 Rock‘s finale was awesome after a really rocky season (again, see Rachael’s Wrap-Up) and The Office was hardly noteworthy at all (hence, Wrap-Up still pending) except for the promise of Holly’s return.

The Grey’s Anatomy Finale: Amazing. A couple minor flaws but generally the best episode they’ve done possibly ever (after an altogether strong season). I was on the edge of my seat the whole time, even though I knew who would perish/survive because of contract news.

The Dancing with the Stars Finale: The right person won and managed to remind me that even if I despise her current band, I loved her first one and she was my favourite when she got her big break on Popstars back when I was a kid who watched Popstars. Also, Derek Hough is a god of choreography and dance and energy. Also, I love Evan Lysacek, he reminds me so much of my friend Chris.

The Bachelorette: I’m still not on board with Ali (she was just WAY too mean to Vienna, who danced on the DwtS finale btw and was beautiful!) but I do love The Bachelorette. I’d watch Chris Harrison do anything and there are already some really promising bachelors (including a cutie from Vancouver who caught my eye early).

Friday Night Lights: It’s back and I’m still OBSESSED. I love very few things as much as I love this show.