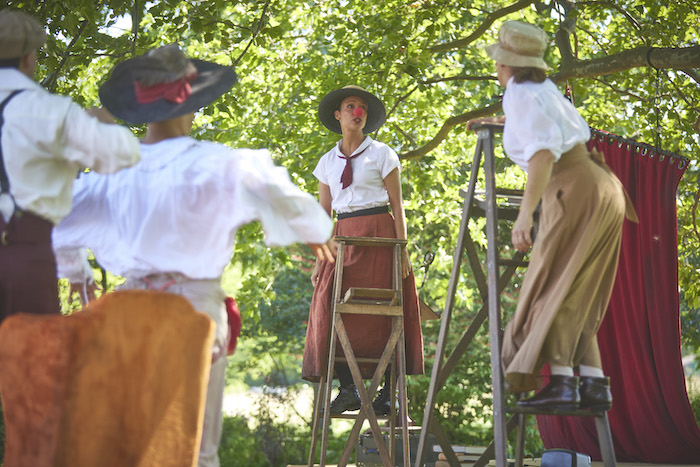 Outdoors At the Shaw: Shawground

The Outdoors at the Shaw programming is what happiness is made of. Created by the cast who performs it, this superb Shavian variety hour tours audiences around the beautiful Festival Theatre grounds, treating us to pleasures ranging from a cooking demonstration to a magic show to snippets of script and song. The show earnestly embraces and celebrates the time and person of GBS, passing along some of the unselfconscious nerdiness for their founder and mandate that makes the Shaw so cute.

But the piece, while unrelentingly uplifting, refuses to pretend that Shaw’s time was utopic. The company incorporates a war widow’s love ballad and a rousing speech from suffragette Emmeline Pankhurst as well as a playful wink at snake oil salesmen and religious zealotry.

The cast is mainly from Shaw’s musical company and they’re very well served by this opportunity to drive their own content and showcase the incredible range of their skills, not just the triple threat but hosting, cooking, clown, and a moving dance-like art charmingly termed “suffrajitsu”, performed brilliantly by Jenny L Wright and Allison McCaughey. Kelly Wong delivers a beautiful self-written monologue about learning to let go while performing an impressive feat of inspirational illusion. Élodie Gillett and Kevin McLachlan play a scene from The Philanderer and make a very strong argument for the musical company’s inclusion in the Shaw’s pool of players for their titular author’s work.

Marla McLean’s restrained direction uses the space of the, ahem, Shaw Grounds very effectively and every transition is smooth as silk between both location and performance. The sincerity and artistry of this ensemble-created piece is top-notch, yet more proof that Outdoors at the Shaw is every bit as important a part of this excellent season as the theatre-bound performances.