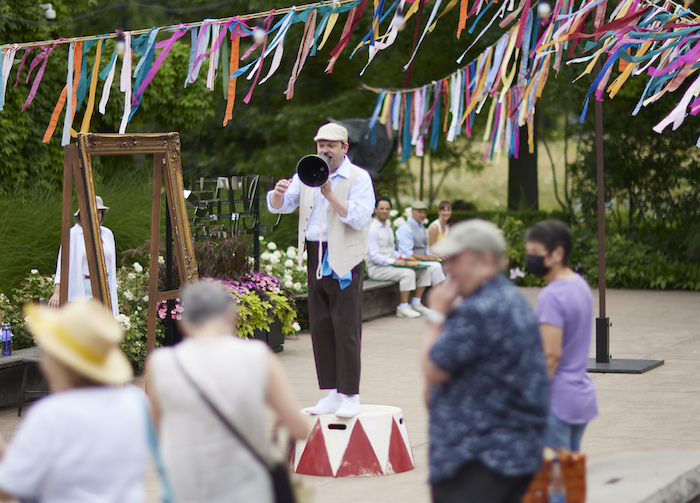 Outdoors At the Shaw: Fairground

The final piece of Outdoors at the Shaw programming I saw this year (I sadly missed A Short History of Niagara), Fairground is a kid-inclusive interactive fair that morphs into a roving concert showcasing members of the musical company (plus Kristopher Bowman). The break dancing from season standout Kevin McLachlan and pet puppets are the highlights of the slightly forced but short-lived fair portion of the programming then the show coalesces as more structured dance and musical performances take over.

Graeme Kitagawa does a thrilling tap routine and James Daly is a one man band with the help of a duplicator pedal performing a superb mashup of familiar tunes. McLachlan and Drew Plummer improvise a silly “you just won a game show” song to celebrate the winner of a very silly trivia show hosted by Bowman and Shane Carty. Élodie Gillett continues her best season ever with a beautiful rendition of “Summer Wind” accompanied in a charming silent scene by, yet again, Kevin McLachlan (I saw six performances this week, he was in five of them, including an understudy stint in The Doctor’s Dilemma).

Fairground lacks the cohesion and clarity of its Outdoor companions but it’s every bit as charming, capped off with a mind boggling aerial silks performance by Jenny Wright whose skill set seems to have no limit. Only 50 minutes with no extended periods of sitting quietly, Fairground is kid-friendly without being wholly kid-oriented, the perfect little taster before a full meal matinee.