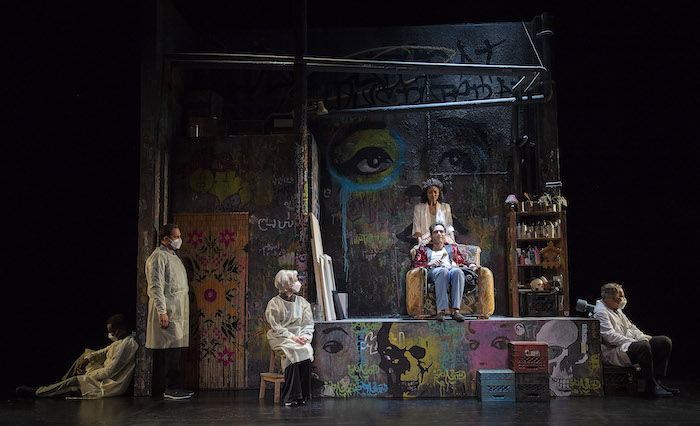 The season’s big mainstage Shaw play is the company’s most successful run at their namesake’s writing since 2017’s Saint Joan. Like that production, this one is smartly updated to mine a dated text for every ounce of its modern relevance. And there’s plenty here, even if the science is more than a bit defunct.

Director Diana Donnelly carefully navigates Shaw’s cringe-worthy mockery of vaccination and modifies a little text where needed to keep the play forward facing. The character of Dr. Cullen is updated to include a female voice in the quartet of doctors (a very effective Sharry Flett, ever authoritative). The addition of an odd lip sync opening sequence baffles a little but for the most part Donnelly’s innovations are practical and thoughtful interpretations to allow the modern audience more direct access to the play.

The central moral question of the play is deeply resonant and not a problem that will ever go away as global access to medical care remains a distant dream and new innovations in particular are reserved for only the lucky few. Unfortunately the main crux of the piece is undermined by the lame complication of introducing personal romantic motivation on the part of Dr. Ridgeon (a replacement level Sanjay Talwar) but the premise remains a strong one.

As the key character in the titular dilemma, Johnathan Sousa plays a suitably icky manchild though I struggled with the singularity of his interpretation, longing for the added nuance of entrancing charisma or even undeniable chemistry to better explain Jennifer’s devotion to him. The dying artist’s wife Jennifer is the heart of the story and noted angel Alexis Gordon is a perfect fit, easily embodying that sort of captivating presence that makes people want to bend the rules. It helps that she’s exquisitely costumed by Rachel Forbes, who also does well by Flett though things go awry with the male wardrobe and smaller female roles.

The Doctor’s Dilemma is an intriguing play that needs careful casting and some thoughtful refinement of its questionable edges. With modern consideration and the right talent, the Shaw Festival has elevated this shaggy play of ideas into a moving and impactful tentpole of its excellent post-pandemic season.