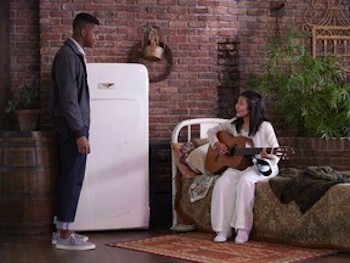 I’m a firm believer that there is room for this kind of thing. I didn’t particularly like it, but I’ll defend its validity until I’m blue in the face because that’s how Shakespeare survives.

For this co-production with Why Not Theatre, Stratford has cast 13-year-old Eponine Lee in the female title role. This raises all sorts of issues. You can start with disgruntled 20-something actors who’ve been training and paying their dues in the hope of one day playing Juliet at the festival only to find the role handed to the still very green child of two prominent theatre-makers. Next there’s the issue of consent for Romeo & Juliet‘s intimacy, which underage Lee is not in a position to give. The production eliminates all physical touch (including violence) from the play, presumably to sidestep the consent issue but also I assume out of an abundance of Covid caution. It was the only responsible option after the initial production-defining casting decision was made, but Romeo & Juliet‘s story is so defined by thoughtless passion- both romantic and rageful- that nothing quite makes sense once physicality is removed from the equation. Finally there’s the issue of interpretation. I frankly think the ‘Juliet was just a child!’ refrain is cynically pedantic and shortsighted. Yes, technically, she is 13, but any contemporary-set production that plays her as such is actively choosing to ignore historical context. Romeo is only 16 by the way yet Stratford’s cast fully grown adult Dante Jemmotte, a fact that makes the choice of Lee seem even more gimmicky and less like the critical text-based interpretation I think it was meant to be. Jemmotte is excellent and I badly wanted to see what he could have accomplished playing opposite a peer.

The rest of the cast is pretty good, especially dependable players like Tom Rooney (the Nurse) and Rick Roberts (Capulet). Newcomer Sepehr Reybod’s Mercutio is annoyingly one-note but Lisa Nasson’s Benvolio stands out for their emotional complexity even within a severely chopped text. Beck Lloyd’s Tybalt is similarly a showstopper with nearly nothing to do (how I longed for a proper fight scene).

The production’s other big innovation is the casting of blind actor Alex Bulmer as the Friar, a nice piece of inclusivity that in theory works on multiple thematic levels (much of the Friar’s advice encourages Romeo to be less led by outward beauty, but they themselves are ultimately shortsighted). In practice, Bulmer’s request that she stay onstage for the length of the play to avoid the potential tripping hazards of multiple entrances and exits (completely fair) was met with an uncreative solution that makes no practical sense (if it’s all happening in their memory, how do they remember things they did not witness?) and raises lots of issues from the mystical disability trope to the reliability of accessibility practices. The actors describe the action onstage to make the production fully accessible to blind patrons but they use this description to facilitate the deletion of the aforementioned physical actions (“they kiss”, “they fight”) and thus the performance blind patrons are observing is not a truthful representation of what’s happening onstage with no acknowledgement of this dissonance.

I had a lot of problems with this production, clearly, but I promise none of them come from a place of “how dare you do that to Romeo & Juliet!”. That’s one of the least helpful positions anyone can take. I love Romeo & Juliet and think that cynical, unromantic takes are sad and simplistic but I’d still rather you take the position that Juliet is so young that Romeo is a predator rather than treat the text like some untouchable gem. (I assumed that’s where this version was headed when I saw the casting but then they played it oddly… sweet? Maybe pick a lane next time). One weird R&J that goes against what you’re used to or think is right for a centuries old text doesn’t somehow overwrite the existence of every other/your interpretation. There’s room for this. They should have done a better job with it, but I’m glad they did it. Stratford, especially under the current administration, is not known for big swings. But it’s literally the only way they’ll ever hit a home run. This is more like a flyout to left but, hey, at least they swung.