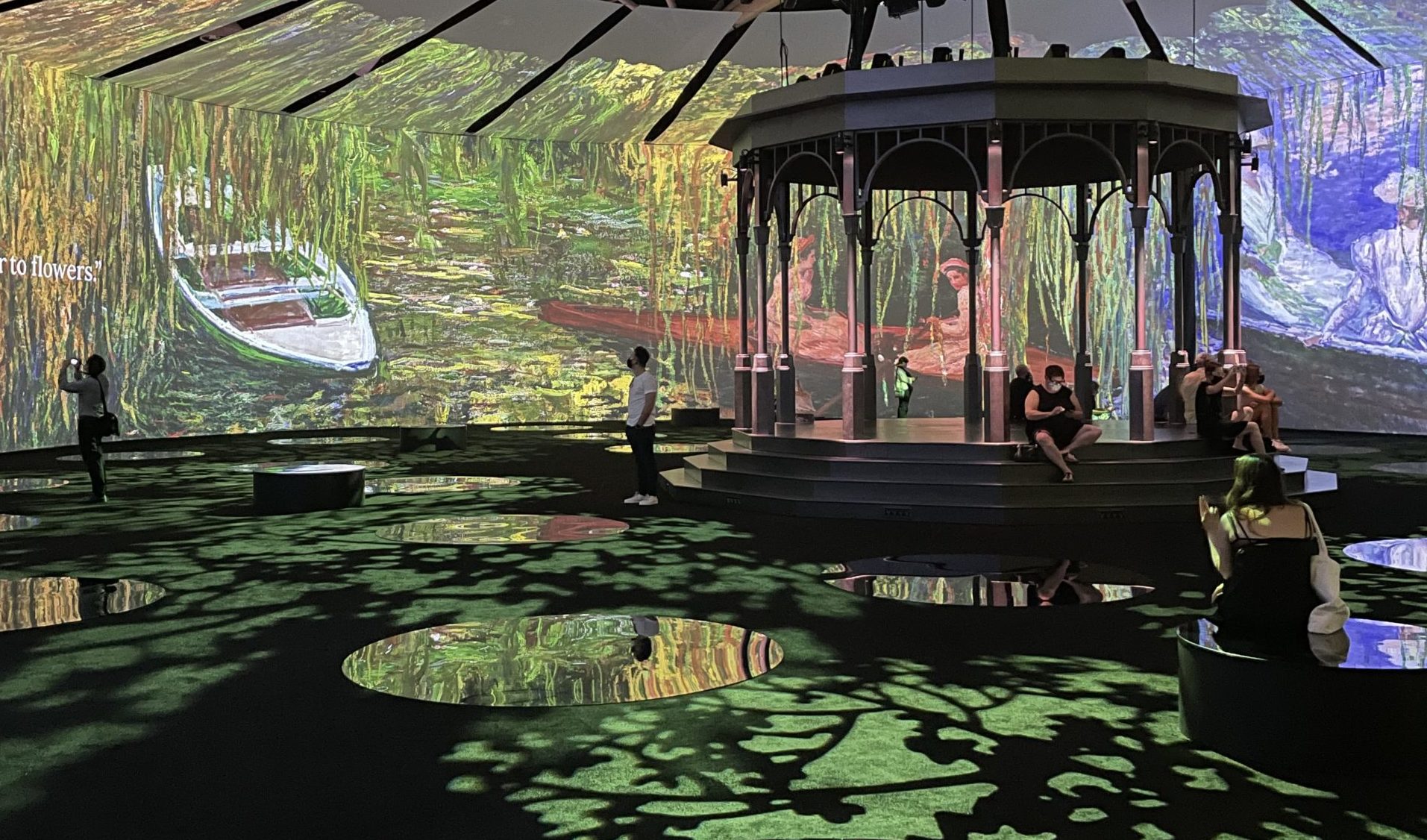 While in-person theatre with a traditional seated audience is still making its way back slowly, one type of live event currently thriving in Toronto is the immersive experience. In the past couple weeks, I’ve had the opportunity to check out three major immersive shows happening downtown and, though none really blew me away, I cannot overstate how much it’s meant to be able to go out and see something, anything. And these three shows offer plenty to see.

Immersive Van Gogh opened in Toronto pre-pandemic and struggled to accommodate visitors over the past two health-regulated years, even attempting to adapt to a drive-through model before reopening to socially distanced crowds this summer. I’ve had my tickets since March and, on our third rescheduling, finally made it last Friday.

Meanwhile, a new competitor to the Van Gogh exhibit opens this week called Beyond Monet. It’s the exact same concept but from different producers and takes place at the Metro Toronto Convention Centre. I attended the press preview of the Monet version this afternoon and was surprised to find how different the two experiences were despite their obvious similarities. Both shows feature a principal viewing room with large 360 degree screens showing what is effectively just a fancy slideshow of the artist in question’s most famous work. Though Van Gogh’s painting style lends itself better to this viewing experience (Monet’s gets a little muddy when it’s all animated together) and his exhibit’s floor-to-ceiling projections hide the metaphorical and literal wires better, the Monet version is a much more thought-out and ultimately enjoyable experience.

Rather than a film that starts again at the beginning every 38 minutes, Monet’s work is presented on a continuous loop so you can truly enter at any point. The Monet presentation is more varied in its animation style and plays with different ways to view the work (at one point the walls of the exhibit mimic a traditional gallery, the next they are an immersive rolling sea mid-storm). Unlike Van Gogh, the Monet exhibit has a full 360 film rather than repeated panels and its simple gazebo design offers the room structure and levels without the oversell of Van Gogh’s “house of mirrors” (just a room) and unnecessary elevated viewing platform. The social distancing circles are reflective to play on the water themes in Monet’s work and the overall vibe is more of a meditative space than a fancy art exhibit.

Considering that neither show comes close to doing justice to its namesake’s actual paintings (go to a real gallery to be able to see the brushstrokes), the tranquil experience approach is the best one. The Monet exhibit also offers multiple spaces for exploration, which makes the whole thing feel much bigger even though I think it’s technically smaller. The first room features badly lit paintings projected onto hanging cloth accompanied by key facts about the artist and a few quotations. There are also little bridge installations in this room that become far more adorable when you realize that this is only the first part of the exhibit. You then walk through a very fun but largely inexplicable sparkly passageway to get to the main exhibit hall. The Van Gogh is just the one big room of projections, plus a gift shop of course. It’s that extra bit of thought to user experience (full 360 content, a continuous loop, progression of spaces) that makes the Monet exhibit stand out when it’s basically just copying a format that actually works better on the original artist’s work. Both shows cost about $40 a ticket though so, though I really enjoyed my Monet experience especially, I’d really just rather send you to the AGO (which is only $35 for the entire year).

The third immersive experience available right now is Jamie Allan’s Illusionarium, which opened a few weeks ago and shares a space with the Van Gogh exhibit at 1 Yonge Street. Being new and selling extremely well, this show is even more ridiculously priced ($100 for 2, the website does not seem to want to sell you a ticket for 1), especially considering the length. Unlike the artist exhibits, this show is a bit more of a show with live performers and a tour guide who takes you through at a scheduled time (the artist exhibits work with a timed entry system then you can take it at whatever pace you like). The Illusionarium is a pretty quick in-and-out tour of five rooms each designed to demonstrate a different element of the history of magic. They’re not all hits. The “secret fifth room”, which is actually third, displays the most interesting feat of the bunch but it’s draped in obnoxious theatrics about how secret and dangerous and exclusive it is (only the first one of these things is true and that’s just because we were told about 70 times not to tell you what’s in the “secret fifth room”).

The production design in the Illusionarium is really impressive but its immersive features pretty much end there as each room is essentially just a sit-and-watch experience with either a live performer (who range from amateurish in the second room to impressive in the final) or a recording (a Houdini projection hosts the first room while Penn & Teller perform a simple but extremely effective card trick in the fourth room dedicated to TV magic). The history of magic as a performance art is fascinating (weirdly the lobby full of information placards was my favourite part) and an interactive tour through that history is a great idea but nothing is taken far enough in the Illusionarium. It needs more illusion. I wanted to be on my toes at all times rather than pleasantly meandering through.

Ultimately, Toronto’s Immersive Experiences speak to an industry that’s just starting to stand back up. They’re commercial to an almost cynical point, all over-priced and counting on content-starved audiences to enjoy the experience even if its under-delivering. And I did enjoy the experiences. To a point. For now, these hyper-commercial sort-of-theatre installations can serve as the restart of art in this city but I know at least for me that I won’t feel like it’s all going to be okay until the not-for-profit theatres are back on their feet too, charging accessible prices for far more than a 38 minute animation and some circles on the floor.

The latest immersive experience to join this lineup is Touch, another from Van Gogh producers Lighthouse Immersive. Co-conceived and choreographed by the National Ballet’s Guillaume Coté, Touch is more of a performance than its immersive predecessors but the projection work is just as impressive, albeit differently impressive. The pas de deux that forms the centre of the piece pairs with Thomas Payette’s mind-bending multimedia design that responds in real time not only to the dancers but to the audience. Find yourself represented graphically on the walls of 1 Yonge Street’s industrial space and even a movement as small as crossing your legs will visibly alter the art. It’s a conceptual and technological marvel presented alongside accessible, enjoyable dance work. The music grates a little and even more interconnectedness between the graphics and the movement would have stunned me more but the gimmick of Touch is so beyond my technological understanding that it still stands out in a crowded immersive field.