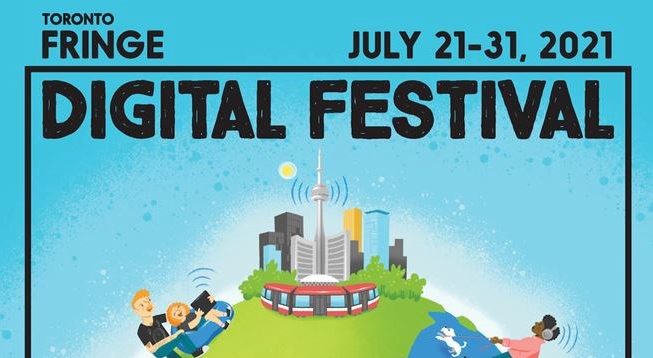 The 2021 Digital Toronto Fringe takes place July 21-July 31 with over 65 shows and nightly communal events, including a digital Fringe Tent.

I sat down with Lucy Eveleigh, executive director of the Toronto Fringe Festival, to chat about digital theatre, inclusive programming, and the future of Fringe culture.

The 2021 Digital Toronto Fringe is running July 21-31. The slogan is “Fringe Where You Are”—I’m wondering what that slogan means to you?
It really is about a global network. I think what we’ve lent into is this idea that if we’re going to do digital, then it means that people can access it from anywhere. We’re really pushing this idea that we’re part of the Canadian Association of Fringe Festivals, but we’re also part of World Fringe. It’s 300 Fringes across the world, and there’s a beautiful network that meet and talk. It was born out of that and then, this idea that you know, anyone can watch. I think it’s really exciting to bring predominantly Toronto work out to other folks, for artists who can’t tour, especially now that people can’t come here. It is a way to connect across the globe.

Fringe has hosted digital theatre events in the past- this past January Next Stage Festival held the Community Booster, and last July, The Fringe Collective was presented- What were the community responses to these past digital theatre events? Was it international? National?
It was pretty international. Fringe 2020, Fringe Collective, had a lot of international people tuning in from all over the place. Next Stage felt like a smaller piece of the puzzle, and we didn’t actually do a huge amount of marketing for that festival. Next Stage was about community building and people who were wanting to engage at that time of year in that format. We’ve done a little more this year in terms of marketing. It will be interesting to see the difference, to see if there is a spike in views from around the world.

Typically Fringe is a lottery submission process. How was the submission process different this year, and has its process surprised you in any way?
It was still a lottery. I was surprised. We had enough space to do a lottery because we based it roughly on the numbers from last year. We wanted to prioritize BIPOC individuals so we did a two-phase lottery for this year whereby we selected from a BIPOC pool first. We reserved 50% of the slots for BIPOC companies.

I was surprised at how many people applied at all to a digital festival. I really was like “everyone is going to be over it, I don’t know how this is going to go,” and we received 230 or something applications to a digital festival. That was really amazing to me because people knew what they were getting into, and they brought a digital offering. That was exciting, and that also propelled us to continue doing digital work in the future.

So, that’s quite a positive impact that the digital element to the festivals has had, that going forward you’ll have this new category of theatre.
Yeah, because I think there’s a desire for it not only from a global point of view but also from an accessibility point of view. There are so many people that haven’t accessed theatre, for whatever reason, whether it’s physically in a space or cognitive concerns. Whatever the reasons are, I think there are a lot of people who are actually finding comfort in being able to watch theatre from their own home. I think we will see this new audience developing, and I want to keep hold of them for Fringe and theatre in general.

What makes these video presentations theatre as opposed to film? Or is there any difference?
I think it depends on the company. I mean, last year we had On Demand a lot as well and I watched all of them actually last year, for the first time ever I was able to watch all the Fringe shows, and there were some that were quite filmic that had recorded their piece in a way that felt more like a short film. Then there are others who I think are offering something a little different than that where it feels theatrical. Whether it’s a direct address to the camera or there’s a theatricality to it where you see the behind-the-scenes, there are theatrical elements coming forward. I would say a lot of the films we’re doing are sort of hybrid. It will be interesting to see this year how many people are really considering the form as a priority for their work because they had this time to develop it. I think we will be seeing some different stuff this year.

What kind of community events are scheduled to keep that Fringe energy alive?
We have the On Demand that you’ve talked about, and then we have our Fringe Prime Time, which are shows happening almost every night at 8 P.M., there’s one matinee as well. The Prime Time shows are our competition winners: Our New Musical, New Play, and our 24 Hour Playwrighting. Those shows will be, most of them via zoom, and everyone is watching them at the same time.

On top of that, we have Post Script patio events, similar to what we did last year, but we’re mixing it up a little bit. We’re doing an artist cabaret night. Alan Shane Lewis is going to be hosting that for us on Monday, the 26th. We have a comedy night. We’ve teamed up with the Underground Comedy Club on Friday the 30th.

We’re also using gather.town, a virtual platform where you have an avatar and a video, and you can walk around the space. As you get closer to people, you can hear them talk, have conversations and move around. We have this amazing woman working with us, Ellen, and she’s created our patio in digital form. You can explore this patio every night of the festival. We have the room open, and you can go in and meet people from the festival, meet artists, meet staff. There will be a group of volunteers to welcome you every night. There’s a theatre space, and there are little tables that you can sit around, and you can chat with your friends. On the closing night, on the 31st, we’ll gather in gather.town and have awards from TO Live and from Second City that we’ll be announcing that night.

Are there any special kids programming this year?
Yep. We have six shows in the On Demand, and alongside that, we have free KidsFest club. Kelly Winger, our Fringe Kids coordinator, has curated workshops and activity sheets that will accompany the shows in the series this year. They’ll all be on the website under the KidsFest section.

How can audiences participate in the festival this year?
Everything is on fringetoronto.com. The primetime shows are ticketed shows. So you’ll have to buy a ticket and get a link right before the show starts.

Otherwise, to access all the on-demand shows, you buy a membership. It’s $5.00 to access the entire site. As you decide to watch a show, you can pay directly there. That money goes directly to the artist. The $5.00 membership fee will be split between the artist and The Fringe. All the money paid on the actual show page goes to the company. It’s Pay What You Can. We obviously suggest $13.00 which is the price of a Fringe ticket.

Are there any shows or artists you’re looking forward to this year?
I’m looking forward to all of it. The one amazing thing about Digital Fringe is that I get to see things. I will definitely spend some time watching as much as I can, and I’ll get my kid to come and watch some of the Kidsfest stuff with me. I never like to talk about one show in particular because they’re all very special, and I just hope they all find an audience. These artists have worked so hard and created such amazing work, I’m excited for them to get to share it with everyone.