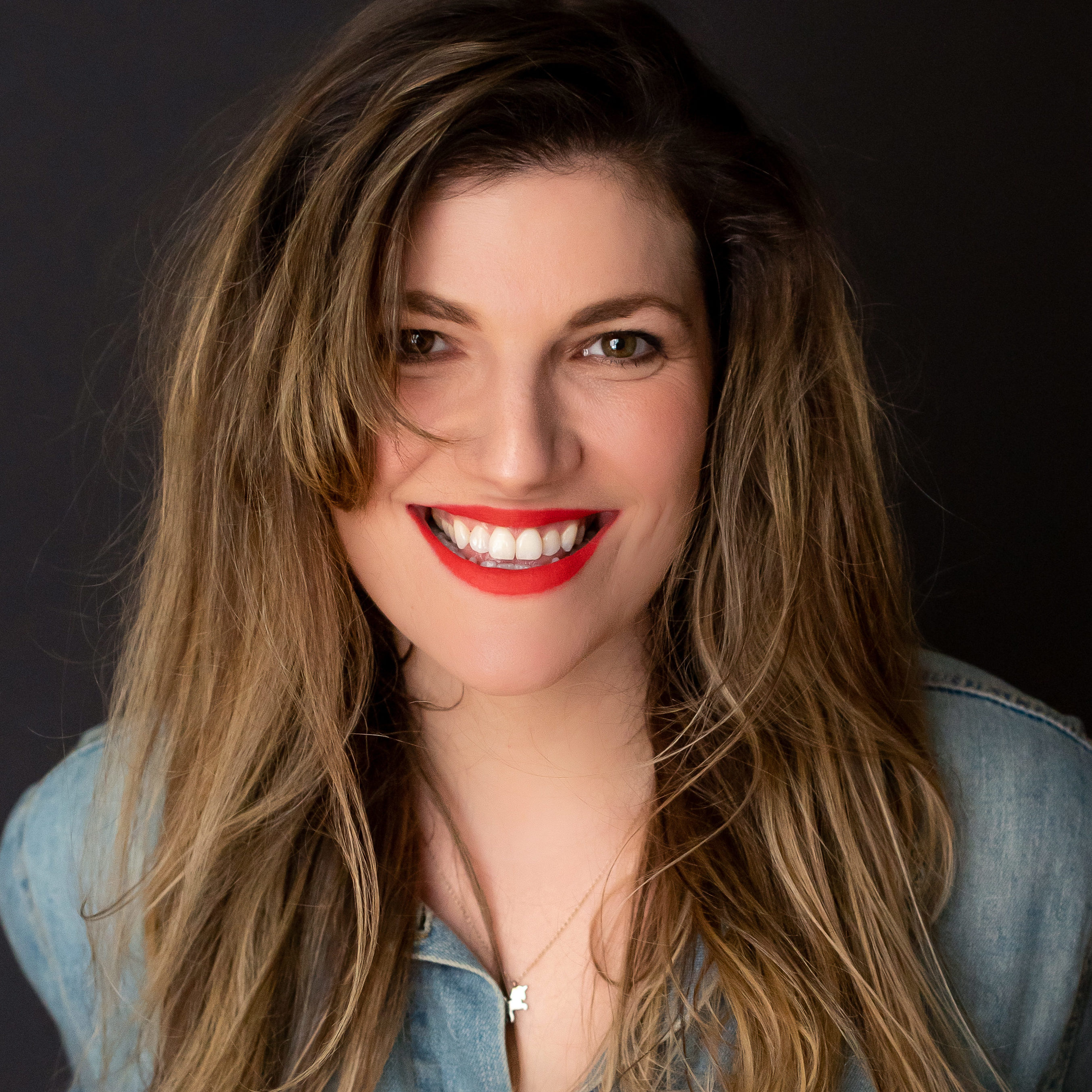 I’m not sure what there is to say about Kat Sandler that I haven’t said a hundred times before. She’s charming and witty and prolific and writes fast-paced, enjoyable plays that sneak up on you with their emotional and intellectual impact. She’s fantastic, which is why I’ve reviewed and interviewed and nominated her many times before so you know all this already. This year she’s once again up for Outstanding New Work for Yaga at the Tarragon Theatre.

Last time you did an interview was for the 2016 Series in 2017. Catch us up briefly on your life since then. That was the year you had three shows that had nominations.
Okay. The big ones since then were Bang Bang at the Factory Theatre, which was really exciting and crazy and stressful, and then the two shows [The Candidate / The Party] out at the Citadel where the same cast of 10 ran back and forth between two very faraway theatres and performed simultaneous farces for different audiences. That was obviously fucking nuts. And then Yaga, which happened in September. So three big plays, and then lots of little bits of TV work and lots of stuff in development.

You’re nominated this year for Yaga. How did Baba Yaga enter your consciousness?
I must have read it as a kid or had it read to me. I had asthma as a little kid – I still have asthma – so my mom read so many books to me while I had this big mask on, which is probably where my love of reading and writing comes from. Tons and tons of fantasy. And Yaga was just a really cool badass weirdo. She’s not like other witches. She had a name. I talk about this a lot; I think we define so many witches by a colour or where they’re from, but it’s always “the witch” or “the wicked old witch”. Like the witch of Hansel and Gretel. They’re often defined by their protagonists, and Yaga had this cool, weird name, and was remembered for being all kinds of different things in different versions of her story. Like a healer, or a wise woman, or a source of evil, or just all kinds of stuff.

I came back to her [laughs] after going to the Sex Museum in New York. There was an exhibit on mating lives of animals, and I just wrote a bunch of monologues, some of which had to do with bones. I was looking for a way to frame them and went back to the Baba Yaga story, and imagined, what if she was this sexy older osteologist, or someone who had something to do with bones in modern day?

I think I started working on it in 2015 or 2016, and this was pre-Me Too, but I had this really big argument with two actors. It was after Ghomeshi, and I had wanted to write something about women who were really evil, who were just evil for evil’s sake. It wasn’t like something bad happened to them. Just evil in the way that all my favourite male protagonists on television specifically – Hannibal, Dexter – they’re just bad. But it’s a justifiable badness because sometimes it’s in service of good, and they’re true anti-heroes, and I couldn’t think of that many female characters that were true anti-sheroes in that way.

The guys were basically saying, “If you write a woman who lies about something terrible or does something awful like that, you’re basically saying that all women are capable of doing that.” We are capable of doing that. And there’s something about giving female characters the freedom to not be good that was really, really exciting for me, and also being able to create a part for this wealth of underused older brilliant actors in our community. That’s the short answer. [laughs]

As you touched on, Baba Yaga has this very rich history throughout folklore. How much of that did you dive into? Did you just read every book in the world?
I actually read a lot of online articles. A lot of the stories that I came across are shorter, but I can’t remember the one that became the thread through the murder mystery. It’s Ivan the Bold. [laughs] This is not a useful answer. If I try to tell it, it’s too bonkers.

I did lots and lots of research, but honestly, I did a lot more research on murder mysteries and thrillers and the structure of those. I rewatched all of my favourites, deeply – things with a twist. What I was trying to do was use the theatrical form to fuck up a viewer in the way that cinematic form can, but with the added bonus of having three actors that are playing all the parts. So it’s a whodunnit, but it’s also like a who-is-it. Who is it right now – which worked in varying degrees.

Was the decision to have everyone play multiple people more of a practical thing, or was it a specific construction? Thematic choice?
It was a choice. It’s useful that it’s much cheaper to produce a three-person play. But one of the theses of that show is that women are all women. Whatever age I am, I’m also simultaneously a very, very young woman and a very, very old woman. We have all of those traits and wisdom and skills and stuff in us, so I liked the idea that two female actors of different ages could play everyone in between. And part of that was the fun of having Claire [Armstrong] play a 15-year-old and have Seana [McKenna] play a 90-year-old.

Baba Yaga’s kind of ageless. We just decided that she could be 60, she could be 140, and you would just never know. She’s a fucking witch.

How did you land on the cast that you ended up with? Did you write with anyone in mind?
Claire and Will [Greenblatt] were both involved in really early workshops. Then when it came to finding Yaga, I think we’d just tossed out on a lark, “It would be great if Seana could do this,” and Richard [Rose, Tarragon’s Artistic Director] was able to set up a meeting and we got to talk to her. And she really brought it; it was really exciting to work with someone who has so much experience with classic texts.

I make every actor a bit of a writer and an editor, and we really workshopped the script like a writers’ room. Seana brings this eagle eye precision to it, and asks so many questions, all of which are intelligent. Very few of which I could answer in the moment, but the way in which she’s inquisitive is such a boon to a new work.

Going off that a little bit, you’re known to adapt your script throughout the rehearsal process with actors’ input. Was that happening a ton here? Was the blueprint pretty much set going into rehearsals?
It still happened a ton. The script that we started with on day one was very different from the script that we ended with, and we had a few workshops and the twist came out of a workshop. I’m hyper-afraid of twists.

It came out of the workshop?
It came out of an earlier workshop, where someone was like, “I’m gonna pitch you an idea, and it doesn’t have to be this. Okay, maybe it is that.” That worked well with form. But I live in fear of twists being discovered early.

The thing you can’t do that I understand now that I’m older is, someone’s gonna call it. Someone’s gonna call it. You probably called it. What you can do is throw as much misdirection and make it as much fun as possible for the person who’s like, “I think I know what it is, but maybe…” and there’s fun in that, as well. The ride is the fun.

Did you have other rejected versions of what the twist would be?
Oh, sure. Always. Just like any ending, or any plot; there’s always a full graveyard.

Do you remember any fun ones?
No. [laughs] That play seems like a really long time ago. I don’t remember any fun ones. They’re all on the cutting-room floor. Probably that there was gonna be another full person and more characters, but I think we had quite enough, in every sense.

How important was it to you to direct your own work?
Very important. For me, they’re not separate processes; as I’m writing, I’m directing, and as I’m directing, I’m obviously still writing, because it’s figuring out an idea from inception to production, and staying with it and nurturing it, and have people add to it and take away from it, throughout that whole process.

I said this to you earlier; I don’t really like writing alone. It’s really about the audience, and sometimes the first relationship with the audience is that first read, so I’ll try to just vomit any terrible first draft out, in the hopes of getting it in front of people who will either read it or speak it aloud with me, and then talk about it, because I don’t know what something is until I talk about it with other people. I know a theme that I was interested in following or I’ll write really quickly to get to the ending, but I need to hear it to really understand it.

Did you have a favourite moment in the production?
Probably the transitions. This show is very different from the stuff I’ve done in the last few years because it’s non-linear. It’s not in real time. It has multiple, multiple locations, while also all taking place in a big forest, and we worked really hard to have those transitions tell a story that also ran parallel to the play itself, because I hate a blackout where you can hear people move and shit, and you’re just listening to a song. It’s just wasted airtime, I think.

The disadvantage of not using that is that it just takes a lot of time to choreograph a transition like a dance, and four small set pieces we have. It was just a real family effort between the design team, the technical team and the actors. I like everything to be so fast; none of those transitions were over 5 seconds. It was so beautiful. [laughs]

What were you hoping that audiences would take away from Yaga?
I think just to talk about older women in a different way, and vilify them in a way that they want to be vilified. One of the lines in the show is that a witch is just someone that a society has decided has no value. But to give power to an older woman in a way that isn’t a doctor, or a grandma. She has her own plot, and her own stakes, and she’s driving it, and also to talk about sex. Sex doesn’t end after 35, I hope. [laughs] And to be able to talk about the way that we can reclaim our own stories. I think that’s happening a lot in different forms of theatre right now. Traditionally, these fairy tales are technically told by men, and to be able to let the wicked old witch tell it in her own words, and tell you the truth of her own origin story, was really exciting.

What are you working on now or next?
A bunch more TV stuff in development. I get a lot of ideas from just cruising the Internet, looking for facts. One of my very favourite websites is Fact Republic. I will find a fact that interests me and just try to build a story around it, and a few of those have turned into potential commissions, so I’m working on those.