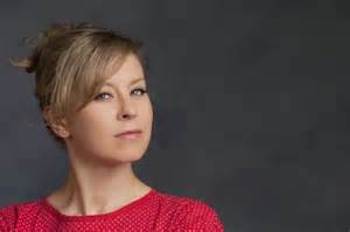 Nicole Underhay has long been one of my favourite actresses in the country. In Coal Mine Theatre’s hilarious and brutal Hand to God, she weaponized her natural sunniness to deliver a brilliantly dark and perfectly pitched Outstanding Supporting Performance in a Play.

Catch us up on life since your last Nominee Interview Series in 2017.
Wow, incredible how exponential the catch up has become over the last few weeks. I will take it back to 2017 and highlight from there. I am living back in Newfoundland. St. John’s, specifically. This is where I was born and raised and have always wanted to come back. I have worked on some really cool indie theatre since I have been home. My last role was playing a woman who murdered her maid and cut the body up in pieces and threw them one by one off a bridge, onto trains running below. Except the head. The play is a two hander with my character in a psychiatric institution, being interviewed by a doctor with a view to finding out where the head is!

How did you get involved with Hand to God?
I had done a casual read of the script with friends of mine, just for our own amusement, and loved the play. When Coal Mine announced they were doing it, I jumped at the chance to audition, and had the great fortune of getting the part!!

What were some of the most interesting conversations you had with director Mitchell Cushman in developing your interpretation of the piece?
I had such a great time working with Mitchell. He’s great at being as hands on or hands off as an actor may require in any given moment, on any given day. I guess the most interesting conversations were probably around how to handle the scenes where I get intimate with Francis Melling, who was playing a 15 year old. What drives that, how far we can go. The great thing is that when you have a director like Mitchell, who establishes a very safe room , and an actor like Francis, who is game, you can feel really free to explore and push the envelope as far as you can.

Did you have a favourite moment in the production?
There were so many. I will say that the puppet sex scene with Frank and Amy and their puppets was one that I watched every time from between the slats backstage. It was so skilled and funny and raunchy. Marcus Jamin did such a wonderful job with all the puppet work. It was so integral to the show.

Tell us about working with Frank Cox-O’Connell as your son and the rest of the cast.
This was a total dream cast. That doesn’t often happen and I think even when people say that, they are often lying and just trying to sound nice. But this was a dream cast. And crew. We rehearsed in the space, on the stage, so it was really cool to have the design elements so married to the work process. As for Frank…. well I am the worst for laughing inappropriately on stage. People think it highly unprofessional, but sometimes I just can’t help myself. Like when I look at another actor and I feel that they are really looking at me and we are present together on stage in a real moment… I laugh because I feel so lucky, it feels like magic. And Frank is that kind of actor that looks you in the eye and is very present. So I inappropriately laughed a lot….

Anahita Dehbonehie’s surprise-filled set was a highlight of the production. What were some of the challenges of working with the changing space?
Just another shout out to everyone on the design side. Making a silk purse out of a sow’s ear is an expression that comes to mind. They all did amazing things with no money. The other inspiring thing was to see people just jump in wherever attention was needed, whether or not it fell within their job description The moving wall was probably the crown jewel. It did not always go smoothly. Sometimes it would just stop mid stage, sometimes it pinned me to the wall. But we never gave up on it and I think its a testament to the collaborative vibe established from the top down that we saw it through.

Robert Askins’ play deals with some really heavy themes in really bold, outwardly strange ways. What was it about the script that resonated with you? Were there any aspects of it that were difficult to connect with?
I think I was easily able to connect with a woman in grief, feeling lost and alone. So I feel like the stuff that is not as easy to connect with just becomes a magnification of those initial seeds that you connect with. So, me personally, at the end of my rope, would not fuck a 15 year old. But I can understand the feelings of loneliness and isolation that lead to a certain kind of decision, even if its the one i personally wouldn’t make.

Coal Mine’s storefront theatre is a much more intimate space than the big Shaw stages where you’ve done a lot of your most memorable work. How do you recalibrate your performance style to suit such a different environment?
I feel like there is no conscious re-callibration, it feels like every show I do is about filling the room. In a way, Shaw was harder because there was a very abrupt transition from rehearsal hall to massive theatre, whereas with this show we rehearsed on the stage from day one, so you bypass that transition. You get to build in the intimacy from the get go and never have to let go of it.

You’re living in Newfoundland now. How’s the theatre scene out there?
There’s a really great theatre scene here. I mentioned one show already but also had the great fortune to do another show that was written by a visual artist just starting with a verbal medium. It’s the most exciting thing about being here. Artists move between disciplines all the time, mostly out of necessity to piece a living together, but more so out of curiosity and ability to try different things.

What’s next for you?
Well this is a question that will have a different answer every day now! Short term is being a responsible citizen and staying the fuck home. Learning Spanish, doing youtube workout videos and having FaceWine time with my friends. Bigger picture I want to start writing. I am tired of having so little control over my work. Tired of being at the mercy of producers and directors and casting agents. I want to take more control of what I do creatively. And also, now that I am well into my 40’s, the acting work is just not as plentiful as it used to be. So I want to be part of the solution for that and create those parts!!!!

Do you have anything you’d like to add?
Thank you for doing this. I have so much respect for you and your team and what you have been able to create. Cheers!!!