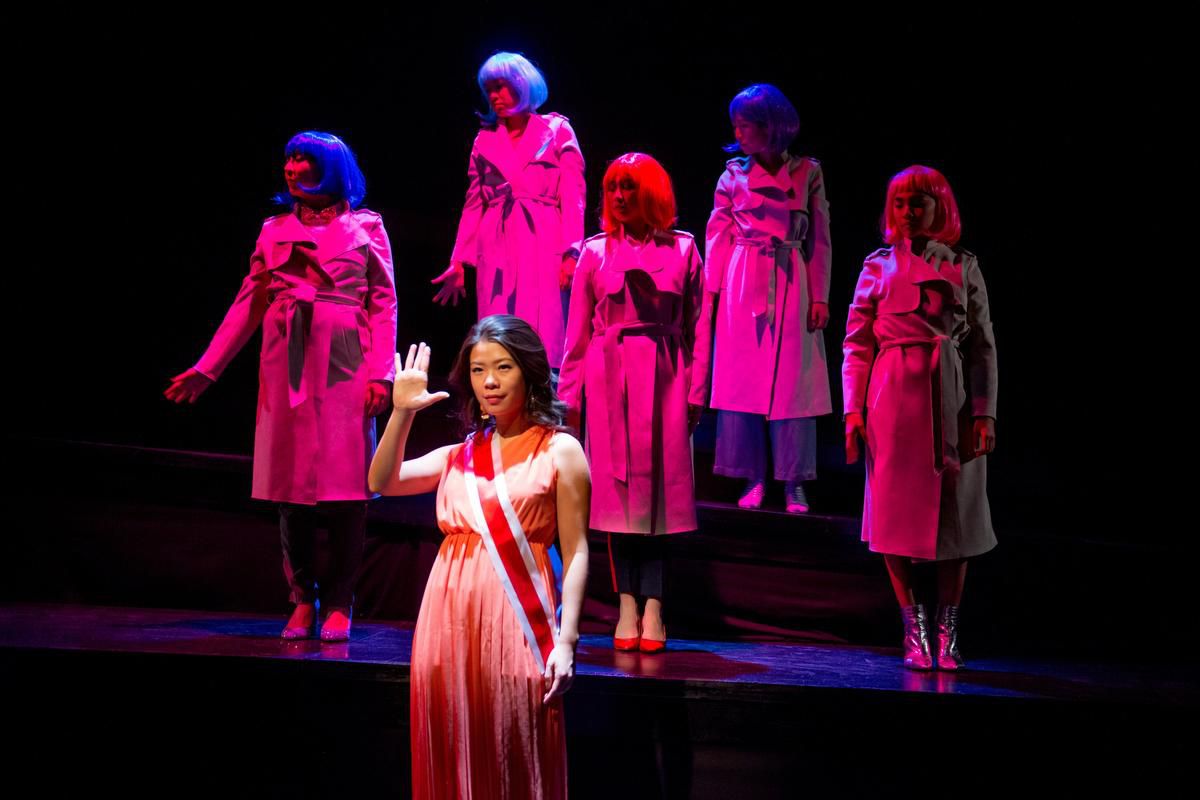 You ever fallen up the stairs before? I don’t know why but I feel more foolish when I fall going up the stairs then I do when I fall down the stairs. You see if you fall down the stairs at least it’s like gravity doing it’s natural part taking you down. But stairs are meant to defy gravity, to reach those new heights. So when you fall going up stairs it’s like they were working against you the whole time, so how can you even climb them?

I bring up stairs because the first image and the image that sticks out to me the most during Lady Sunrise at Factory Theatre is Camellia Koo’s set design of a giant staircase. It is intimidating, inspiring, and it catches the imagination. A staircase that sets the action of 6 Asian Canadian women in Vancouver. 6 women trying to climb that staircase or at least not fall off. There are multiple stories in this show from all walks of life that may have cameos in each other’s stories but still stand on their own as painfully raw powerful stories (written with commitment and fire by Marjorie Chan) that are well balanced to create a show that handles a multiple story juggling act with grace and heartbreaking power.

It is quite poetic that the first action of the play is Penny (Lindsay Wu) a model and pageant veteran walking down the stairs of the Factory Theatre Mainstage space from the audience to up to the stage. The steps the women in this play and really the world take to advance in society or at least just survive are put on full display along side Vancouver casinos, building permits and dim sum.

It might only be 6 performers but they each represent a different facet of life that really inspires thought on those society tends to put into nicely organized judgement boxes.

Penny’s journey from model, socialite to her fall is like watching a car crash you just wish would have emergency services arrive to put out the fire. Lindsay Wu embodies the character with a charm that easily switches from bravado to raw vulnerability in a snap. Sherry (played with courage and commitment by Belinda Corpuz) is a sex worker who finds herself caught in an abusive position and you root for her to find some sort of help or light. Dealer Li ( Zoé Doyle bringing a performance that lives in maturity and strength at all costs) is just trying to get by as a single mom, working herself to the bone for those who feel comfortable throwing money away or as a weapons against hard workers like Li. These characters with the exception of Penny (who seems to be able to teleport between the stair levels of the set) tend to occupy the lower levels of the stairs.

On the more upper levels of the staircase you get characters like Banker Wong (Rosie Simon giving a strong performance) an ambitious and grounded banker who is the very embodiment of victory at all costs and almost vicious business acumen. Charmaine is a no nonsense owner of a “massage” place and yes the quotes are meant to hint at….you know just see the show and find out for yourself. Charmaine is a pragmatic character and Louisa Zhu plays each of the arguments with accuracy and really sells the experience and harsh practicality of Charmaine. Finally there is Tawny Ku. Mentor to Penny and financial investor and really just capitalism in designer clothing (Ma-Anne Dioniso is delightfully fun in this role but also captures a heartbreaking and also almost heartwarming truth when the walls of Tawny are finally exposed).

So you see there is a lot going on this play but Nina Lee Aquino’s direction works perfectly with the set to give each story it’s spotlight. Characters often either speak up to or down to each other on the stairs and it is a relief when characters are on the same level. Being on the same level can save a life just as easily as being on different levels or worse, being alone on a level can end one. These steps are huge just like in life and for women there are even more barriers in addition to the size of the steps. Barriers like abusive men, engrained sexism and gender expectations make climbing those stairs so much more harder. And sometimes the only way you can be happy is if you get off the stairs and sometimes the only way you can climb to the top of the stairs is when you have lost everything….but then you only got one direction left to go.

This is a show that brings up important stories and dialogues that will challenge a lot of pre conceived notions. In terms of story telling, design and performances. This is a play that is on a high and strong level on those stairs.

Lady Sunrise is all about that climb up the stairs, you want to root for all of the characters to climb and climb. And it is inspiring to get as high as the sun. But the sun falls and it hurts when it does.