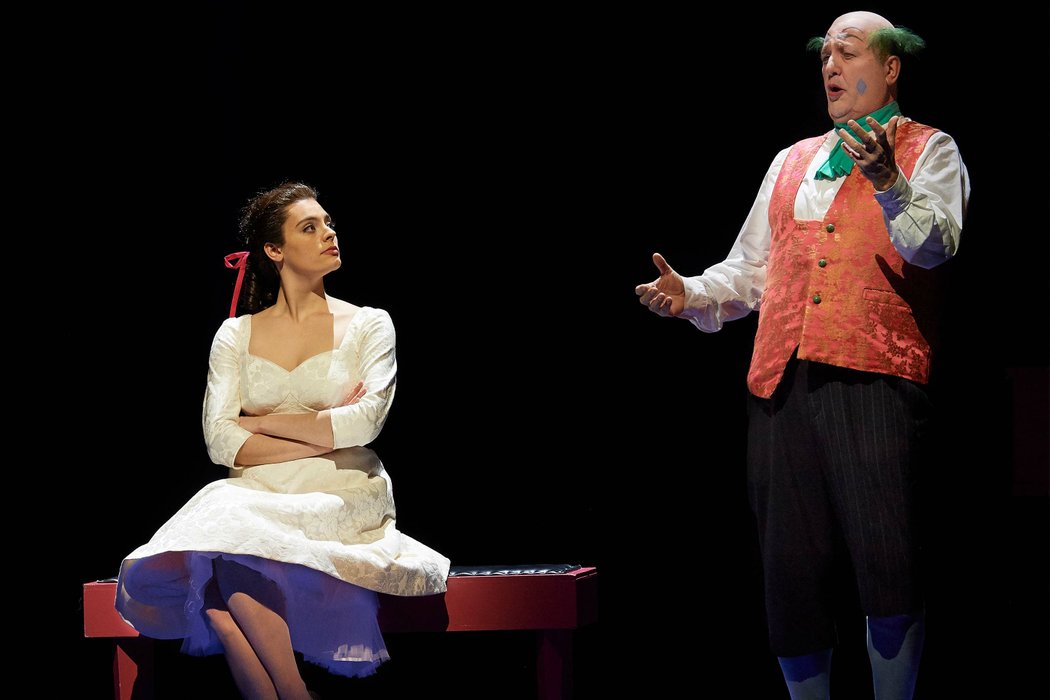 All right I’ll be honest. Did every time I describe the show I was seeing tonight, did I use the phrase, “Figaro! Figaro! Figaro!” Yes, I did. For one, it is the one of the most iconic parts of the show so easily quotable and it is impossible to sing it without smiling. Go ahead take a couple seconds do it right now and tell me that it doesn’t make you smile. I will go ahead now at this point and assume you have done it and agree with me.

The Barber of Seville by the Canadian Opera Company is an opera that like the famous lyric just leaves a smile on the faces of patrons. Even if you are not a regular opera goer this is a fun piece that utilizes a basic premise and pushes it with pantomime, commedia dell’arte, zany comedy and some acrobatics to delight. Count Almaviva (played with a lovely swoon and charm from Santiago Bellerini) is in love with Rosina (Emily D’Angelo who embodies the character with wit, strength and a powerful voice). However, her guardian a hilarious old commedia doctor style character schemes to keep her to himself, (Renato Girolami nails his comedic timing and his clown like buffoon performance is spot on). Almaviva enlists the help of the wily titular barber Figaro to help, (Vito Priante who plays this larger than life character with a confidence and swagger that arouses support from the audience). They are supported by a strong ensemble cast who are devoted to the wackiness of this romantic misadventure. Every voice is strong and the pantomime almost over the top character performances is to be praised and creates a very fun and humorous atmosphere.

The opera itself is sung in Italian but is presented with English surtitles. Now the direction by Joan Font and the assistant director Allison Grant presents a very clear story that even if you are not watching the surtitles, you would still understand the basic premise of what is happening. Not reading the surtitles would cause you to miss out on the best jokes and key lines in the show. Where the surtitles could use some improvement is during the sections where the characters are speaking over each other as it is not always clear who is singing what line and the screen is small, so it doesn’t post the full text. Now I say this with the understanding that in no way is any production that is not spoken in English obligated to cater to an English-speaking audience. However, if a piece like The Barber of Seville has that intention than the technical aspects of the surtitles could use some improvement.

The action of the play greatly varies from act to act. Act 1 is very much a set up. A way to introduce the characters, their relationships to each other and the basic plot for Almaviva and Rosina to come together. That first act clocks in at about 95 minutes. The second act is where the plan moves into full swing and as such is where the more zany and wacky elements of the show occur, (special shoutout to the scene where someone who was told they are sick won’t leave until they are given more money, which you know if we end up losing our universal healthcare… well gotta pay that bill somehow.) This second act also only clocks in at 50 minutes so the it blows by rather quickly and key moments that could have been expanded on feel rushed. However, there is a comedic benefit to having crucial emotional moments in a theatrical relationship suddenly getting smoothed over because of a five-word reveal. What occurs then between the two acts is an imbalance and I couldn’t help but feel that some of the first act could have either been put in the second or moved along a speedier pace to create a more balanced show.

This imbalance aside, all the scenes enter with wonderful comedy stock characters fueled by energetic and beautiful performances/voices that make them a delight to watch. This play greatly borrows from Commedia Dell’arte character tropes like the witty Servant/Harlequin which would be our Figaro and passionate lovers which would be our Rosina and Count Almaviva. It is interesting to note that in the whole play Rosina is the only one to be able to match wits with Figaro and not fall under his tricks. A refreshing subversion of expectations and comedic tropes. The music conducted by Speranza Scappucci compliments and sets a wonderful living track to the action of the stage, moving with each piece of dialogue, character shift and physical action.

This is a fun show for anyone no matter what their experience seeing opera is. Despite the imbalanced timing and structure of the acts, it is an easy show to follow along to. It utilizes stock characters and dedicated performers to great effect. Lastly, the comedic elements of this chaotic but ultimately sweet love story will leave a smile on your face. Just like saying and please feel free to do it again, just like singing, “Figaro Figaro Figaro!” Now if you will excuse me, I think I need to get a hair cut myself.