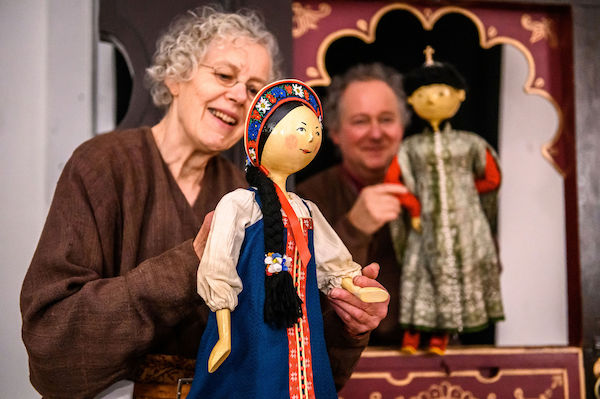 From December 26-29, Puppetmongers Theatre are celebrating the 30th Anniversary of their Winter Holiday Show for all ages with Tea at the Palace, a sumptuous retelling of two classic Russian folk tales exploring themes of social justice, equity and compassion.

The brother and sister team of Ann and David Powell are true treasures of the Toronto theatre community. Ann and David are currently celebrating a whopping 45 Years as Puppetmongers Theatre – though that number’s a bit of an approximation: “We’ve lost track!” says David jovially, only half joking.

Over the past 4+ decades, the Puppetmongers have performed a dozen pieces of groundbreaking puppet theatre in ten countries. The beloved long-time tradition of Puppetmongers’ annual Winter Holiday Show kicked off with Tea at the Palace at the Tarragon Theatre Extraspace in 1990, so it’s especially fitting to be returning to the Tarragon stage this winter to mark the occasion of this impressive milestone.

Each puppet, prop and set piece in Tea at the Palace is exquisitely handcrafted, and children and their adults alike delight in the inventive, enchanting mechanics of the magical pop-up scenery — Ann and David refer to thispiece as “The Show of 1000 Hinges.” In a time where puppets are seen as “props” in certain artistic circles, what sets the Puppetmongers apart is their extraordinary respect for the art form of puppetry and the painstaking, meticulous detail they bring to every level of the creation process: from researching the story, to the particular style of puppetry they’ll use to tell the tale, to the characters with whom they share the stage. The script is the last step in the development of a Puppetmongers show, after storyboarding and building the puppets: “The language comes from the puppets really – they tell you want they want to say.” For Ann and David, the puppets are the characters in the story, so “they can’t learn lines that someone else wrote – they’re not good actors.”

Tea at the Palace runs for only six performances at the Tarragon Theatre Extraspace: December 26th at 2:30pm; December 27th and 28th at 2:30pm and 7pm; and December 29th at 2:30pm. An enchanting and entertaining holiday treat for ages 5 to 105, tickets range from $20 (Children/Students/Seniors) to $25 (Regular) and are available at puppetmongers.com/holiday2019.