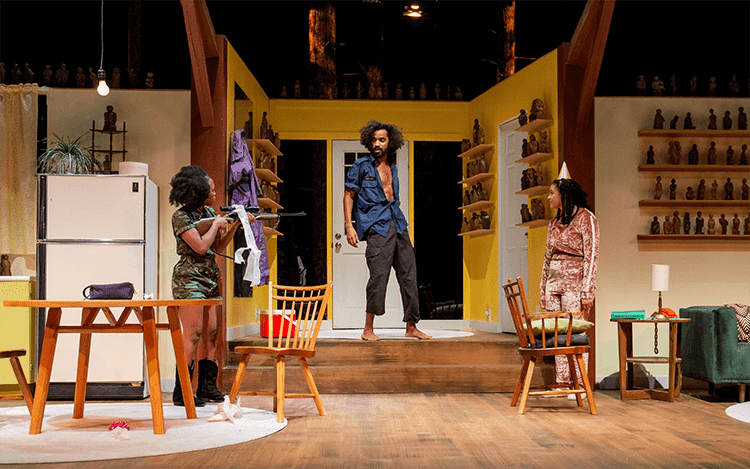 Traditionally, the Gothic aesthetic has dabbled with imagery of the supernatural, haunted castles, and other spooky fare. It is more reminiscent of Stoker’s Dracula lurking around Transylvanian castles than velour tracksuits and cozy log cabins, but this is Canada, eh, and Canadian Gothic needs to represent this nation and its inhabitants. Yes, Canadian Gothic is a thing and Claudia Dey’s 2004 play, Trout Stanley, has been touted as a triumph of this particular writing genre.

This iteration of Dey’s work has been called a reimagining of the original play for a new generation of artists and theatregoers. Having never watched previous productions, I can only speak to my own personal enjoyment of acclaimed director Mumbi Tindyebwa Otu‘s new vision of this work. First shown at Factory Theatre 14 years ago, Otu’s 2019 revision of Trout Stanley features a cast of black actors and draws on her own lived experiences and feelings about being a part of an African immigrant family in a small British Columbia town.

Her vision has resulted in a wonderfully absurd dark comedy. Set in the deep woods of British Columbia, we meet two sisters, twins actually, on their 30th birthday. Sugar and Grace Ducharme. Grace (Natasha Mumba) is boisterous and beautiful. She is the Lion Queen of her home and reigns over her home and the local garbage dump. She fiercely protects her sister Sugar (Shakura Dickson) who hasn’t left the house since their parents’ death 10 years prior, insisting on wearing her mother’s old velour tracksuit day in and day out.

Sugar is a gentle soul caught in a moment of time that she can’t seem to escape, behaving more like a 1950s housewife than a single young woman. Sugar, like her name suggests, is sweet to the point of being almost saccharine. She loves all living things, especially animals, and especially squirrels. Dickson’s portrayal exudes love and radiates nativity. However, when the time comes she is also able to draw on years of repressed anger to find the strength needed to break loose of her own prison and follow her heart. Dickson makes this transition seamlessly without forfeiting the character she’s already developed.

In a show with only three characters, believability in the relationships on stage is everything and Sugar’s relationship with both her sister and Trout Stanley (Stephen Jackman-Torkoff) are portrayed beautifully. Mumba’s portrayal of Grace is both tough as nails and vulnerable. After making a promise to protect her sister, she seems to be constantly walking on the razor’s edge. Her words are tough, but her body language and tone often betray her bravado.

Jackman-Torkoff’s Trout Stanley is a loveable mess. Suspicion that the stranger may harbour murderous intentions seem ludicrous when you look into Trout’s doe-eyes and listen to their passionate exposition about the intricacies of snail love-making. Jackman-Torkoff is truly a gem in this role. I don’t know if could enjoy another actor playing Trout now that I’ve seen this version.

The energy shared by this dynamic cast and Otu’s direction create a show that audiences will love from the moment it begins until the final lights dim. Whether reveling in the moments of hilarity or wondering with quiet sympathy at the tragedies faced by the sisters and their strange new companion, this current production of Trout Stanley is an update worth seeing. If it’s your first experience, like it was for me, you’ll be on the hook for that guy named for a fish.