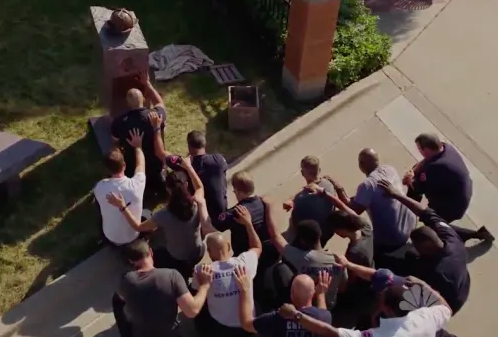 I’m a cryer. I cry easily and a lot, triggered by all sorts of things from nostalgia to empathy to heartbreak. It can be difficult to explain to people what it means when I cry. Our basic human instinct is to assume that if someone is acting in a certain way, it means they’re feeling how we feel when we act that way. This is just plain not the case with me and the crying. Oftentimes someone who cries rarely (or, like, a regular amount?) will look at my crying face and project the intensity of feeling it would take to make them cry the way I am. Recently I’ve developed a strategy for making them understand that I’m fine, it’s not that serious, it’s just that my body physiologically reacts to emotion more quickly than theirs does, not that I’m actually feeling more than they are. The strategy is the following sentence: “I cry at least twice in every episode of Chicago Fire“.

I choose Chicago Fire for a couple of reasons. The first is that it’s true: I do cry at least twice in (pretty much) every episode. The second is that it’s funny: no one takes Chicago Fire seriously, what a silly thing to cry over! And thus the point is made. “Well, if she cries so easily that Chicago Fire makes it happen on the regular, surely I don’t really have to worry about the tears happening in front of me now”. That’s true, I really don’t want you to worry about the tears happening in front of you right now. But also, you’re wrong about Chicago Fire. Sometimes I think of all the TV shows I cry over regularly (and there are so many), it’s best to cry over Chicago Fire.

Perhaps the most famous of cry-heavy shows on TV is This Is Us, a soapy family melodrama that hit it really big a few years back for reasons I’ll never quite understand. As a fat woman with self esteem and a critical eye, This Is Us makes me grumpy and thus I’m immune to its reported tear-inducing powers. I am, however, prey to This Is Us imitators like A Million Little Things, a soapy friend melodrama that premiered last year to medium hoopla but in my opinion is at least ten times the show that This Is Us pretends to be (and yes I do watch This Is Us, because you’re not allowed to criticize something you don’t watch and I feel it’s my duty to criticize This Is Us; someone has to). A Million Little Things is charming, surprisingly funny, and earnestly romantic but it uses the same emotion-guiding music and overwhelmingly sad triggers that are time-honoured “make’em cry” traditions (the most obvious example is a cancer storyline but killing a pet is also a TV writer go-to). A show like that is impossible to emotionally resist, it’s goal so singular, asking for tears like Audrey II asks for blood. Crying at something like This Is Us or A Million Little Things is like saying you like The Beatles, it’s so common you might as well not even bother saying it.

Then there are the shows that simply have subject matter that genuinely deserves your tears without having to resort to manipulative music cues (When They See Us, Chernobyl) or shows that hit a very specific trigger for you personally (I obviously cried during Shrill, you probably did not) or shows that are just so incredibly well made that you have to cry because goddamnit they did it (GLOW, Ramy, OITNB, Fleabag… there are actually lots of these; TV is so great). Sometimes I cry during reality shows but that’s not really relevant because that’s just me crying over glimmering moments of human vulnerability or kindness or triumph in a context that didn’t advertise those things as part of the principal product (to be clear here I’m talking about like a really touching moment on Survivor which is supposedly just a big game show, or a really true moment on Bachelor in Paradise, not something like Queer Eye which has quickly become the This Is Us of the reality sphere).

But let’s get to Chicago Fire. The reason people laugh when I tell them I cry twice in every episode is that it’s a Dick Wolf procedural on NBC with masculine energy and two very mediocre sister shows. Also because those people don’t watch Chicago Fire.

When I say masculine energy, please understand that I say it with sadness. Should having masculine energy make a show inherently less emotional? God no. Does it usually? Unfortunately yes. As a culture, we don’t tend to market emotional stories towards men because one of the principal ways we are intent on toxifying the world is by telling men that they’re not supposed to be in touch with their emotions. Or show vulnerability. Or care about relationships. Or cry. Which is one of the reasons why Chicago Fire is so cool. Superficially, it’s got all the trappings of a traditionally masculine show- a mostly male cast, very plot-driven, lots of action, a stereotypically “manly” career at its centre. I’m not sure if it’s true since Chicago Fire‘s demographic I suspect is mostly ladies who think firefighters are hot but I like to imagine a type of viewer who was attracted to Chicago Fire‘s classic masculine iconography- you know those terrified guys who call anything with an emotional component or a female character with agency “girl stuff”- and hope that they maybe got tricked into enjoying a show that’s far more interested in human relationships and feelings than comparable productions (Chicago PD is actually the cold, tough show that guy was looking for; don’t tell him). Chicago Fire is like the emotional equivalent of sneaking vegetables into a kid’s food. You’re watching these tough guys haul heavy metal off a trapped kid then go drinking at the bar and… BAM! One of them is having to face his guilt over endangering a colleague on a previous call.

The fact that many of the characters themselves are tough guys is part of what works so well. Firefighting is not a touchy feely job and a lot of those guys become pretty buttoned up as a coping mechanism against the really scary stuff they deal with on the job. (And when I say ‘guys’, please note that Chicago Fire has actually done a really really good job of not just integrating strong, well-drawn women into the cast but they haven’t been afraid of dealing with the realities of being a woman in such a male-dominated environment). How the show has approached the emotional stories of characters who are not great at dealing with their emotions is one of Chicago Fire‘s greatest strengths. I don’t tend to cry because they pulled off a really emotional rescue or because the procedural story of the week was sad (that’s the stuff that makes 911 a big cry show), I cry during Chicago Fire because, despite the trappings of its microgenre and even the standards of its own mediocre “Chicagoverse”, Chicago Fire let me get to know its characters on a personal, emotional level. I care about them, so I care when they go through hard things whether it’s a break-up or a crisis of confidence or losing someone on the job.

That last one came into play in last week’s season 8 premiere (spoilers from here) and it was devastating. Chicago Fire has killed off characters before (the long-gone but still-missed Shay got a little shout-out in this episode) and their willingness to do so is one of the reasons the audience is able to feel close to these characters, not just because grief creates compelling emotional storylines but because killing someone in season two means that when everyone is in danger in season four, the fear feels real rather than like a simple season finale trick.

Yuri Sardarov’s Otis was always the Willow of Chicago Fire– the innocent, universally liked character who was most effective for the writers to put in danger because it elicited the strongest reaction from the audience. But Joss Whedon always laughed at the audience reaction to Willow being in danger; he was never going to kill Willow. Otis has been in grave danger multiple times before but this time he didn’t make it. The show used a tried and true reveal structure that distracted the audience with a lesser injury (Brett’s arm got pinned under concrete from a fallen ceiling) before the big reveal and Otis was gone before the opening titles. After a brief hospital scene, the show jumped three months into the future and, despite a silly subplot about a temp with a part-time modelling gig, even a pretty massive time jump didn’t let the characters move past the loss.

Let me clarify one thing- most of my tears were not because it’s sad to watch someone die (and the way they did it, exposing the brutal burns under his gear was brutal; I literally said “woah” out loud to no one). Of course some of the tears were for that, and the music did swell, and they played the This Is Us-style tricks that they had to play. But Chicago Fire tears aren’t strictly sadness tears in the style of the more manipulative shows’ tears. I cried because the show had never been shy about letting us know how much Joe Cruz (Joe Minoso) loved his best friend. And because we’ve seen Matt Casey (Jesse Spencer) grapple with his leadership role before and we know how heavy the guilt over losing one of his men will be. And because the team dynamic was so strong and now there’s an empty space where someone we knew well used to be. You cry in Chicago Fire because you care about the people in Chicago Fire. It’s a big-hearted show about people trying to do good and be better and only a tiny fraction of the tears are because something big and sad happened.

Otis just died and that’s the sort of thing that makes you cry the whole episode. But fifteen episodes from now, when the music isn’t swelling anymore and the big sad thing is in the past, I’ll still cry twice every episode of Chicago Fire because I care about the people in Chicago Fire and it’s moving to see them try to do good and be better. And I’m fine with that. Maybe it helps people put my crying into context to tell them that I cry during a show they think it’s silly to cry about. But I always feel better after a good Chicago Fire cry; my eyes are red but my heart is lighter. You should try it sometime.