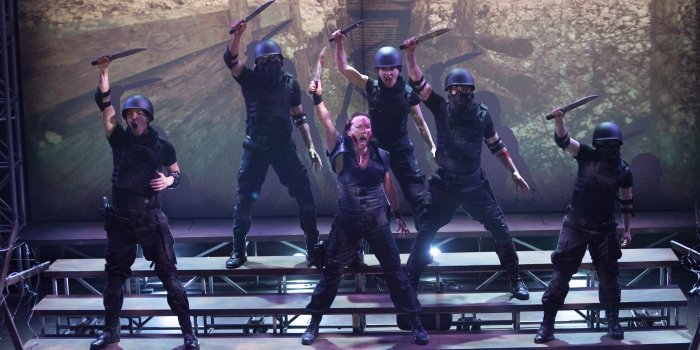 Out of Town Report: Bard on the Beach’s Coriolanus in Vancouver

This, its 30th year of existence, was my first Bard on the Beach season. The Ontario summer theatre season is overwhelming all on its own and there’s already so much that we can’t cover (one of these years we’re coming for you, Festival Players, St Lawrence, and Blyth), I didn’t have room in my brain, not to mention my schedule, to grapple with what I was missing all the way on the other side of the country.

O’Connell is one of Canada’s greatest leading ladies, a Critics’ Pick Award winner I covered for years at the Shaw Festival before sea changes sent her back to the west coast where she’d always made her home in the off-season. I’ve been a little bit in mourning over Ontario’s loss since she left, having gotten used to dependably getting to see 2-3 great O’Connell performances every year. I of course still follow her on social media, which is where all the trouble began. In February, O’Connell retweeted the following promotional image:

There’s no female role in the canon that makes sense with that image so I hit google and ended up on the Bard on the Beach website for the first time ever. It was Coriolanus. I knew O’Connell had been Bard’s Lady Macbeth the previous year but I’d been able to live with missing that, memories of her Hedda Gabler, Queen of Hearts, Maggie the Cat and a dozen other roles stepping up to piece together an approximation of what that might have looked like. But I couldn’t miss Coriolanus.

Even for a company dedicated to giving great parts to women whether they were written for them or not, a female Coriolanus is rare. I’ve never heard of it being done before.

That’s partly because nobody does Coriolanus full stop. It’s having a little moment right now with a hit production from Stratford and a semi-recent movie adaptation but, within the larger picture of Shakespeare’s canon, it’s one of the ones most people have never heard of. Which is absurd, because it’s an incredible play. If it were up to me, Coriolanus would take its place in the top tier of Shakespeare’s oft-produced/generally-agreed-upon masterpieces, below Lear and above Othello, maybe somewhere around Macbeth. It’s timeless, political and personal, emotionally complex, and open to a vast array of interpretations. For his production on Bard’s tiny second stage, director Dean Paul Gibson has played it pretty straight with a slick modern aesthetic, beautiful stylized fights (co-choreographed by Lisa Stevens and Robinson Wilson) that don’t shy away from blood, and simple staging that keeps the focus on performance choices for some of Shakespeare’s most complicated characters.

Even without changing the gender of the title role, the play contains one of Shakespeare’s greatest feminist badasses in the form of the lioness Volumnia (here she’s Colleen Wheeler, appropriately overwhelming). In his (her/their/whatever) contradictions and failures, Coriolanus is an endlessly fascinating protagonist and Aufidius an all-time foil who is neither true antagonist nor true comrade nor anything else quite so easily defineable (Marci T House is awesome in the role- enigmatic, enticing, and very dangerous). The tribunes are, in intriguing equal measure, entertaining and infuriating villains played by Craig Erickson and Praneet Akilla with brutal ambition (the latter, by the way, is a huge star whether his resume knows it yet or not; keep your eye on him). The spouse character Virgilia is criminally underwritten but you can’t win ’em all and imagine my surprise to find that I cared far less about this failing when the character became Virgilio (though Anthony Santiago’s take on a gentler kind of man than those who populate the rest of this Rome was intriguing, I wouldn’t have minded more of him). The only thing about the Bard production that didn’t work for me was the kumbaya singalong among Aufidius’ soldiers, pretty though it was. Coriolanus is a play where the heroes are villains and the enemy is your friend, setting up any semblance of a Sicilia/Bohemia tonal binary messes with the evocative “it’s all grey area” tension.

But let’s get back to the point- they cast Moya O’Connell as Coriolanus! There are essentially two sets of rules when it comes to gender bending Shakespeare- there are the good, smart rules that have to do with story clarity and thematic usefulness, and there are the dumb, regressive rules that have to do with tradition, expectation, and exclusion. It’s that second set of rules that has limited Coriolanus to not just men but hulking jockish men our idiotically limited cultural consciousness can most easily process as “warriors”. But there’s nothing about Coriolanus’ journey that is specifically informed by his being male (not in the way, say, Macbeth’s is). In fact, gender stereotypes play beautifully into the story with a female lead, strengthening the play’s political themes without muddying the plot one bit.

The extreme backlash to Coriolanus’ pride and stoicism hits harder when contextualized by how little leeway is given to women in politics. Women are expected to be humble, to know their place, to always say exactly the right thing, and to say it with exactly the right tone of voice lest we come off as “shrill” or unelectable for whatever other reason. O’Connell in particular is wonderful casting- athletic and intense enough to believably conquer Corioles without a moment’s pause, an inherently intimidating presence who can flip on a dime between the warmth of a scene shared with Virgilio and stone cold in the face of the common people- but casting a woman in the first place unlocks a whole new level of Coriolanus that, when played in a modern context, is haunting in both its horror and its horrific familiarity.

So I flew across the country just to see Moya O’Connell play Coriolanus. I ended up seeing three Bard on the Beach productions, a world premiere ballet, and ten shows at the Vancouver Fringe. I’m glad I came. I’m glad I got to see what the west coast is bringing to a Canadian arts landscape we too often think of as Toronto-centric. But mostly I’m glad I got to see Moya O’Connell play Coriolanus. It was as unmissable as I worried it would be when I found out it was happening 4000km away.