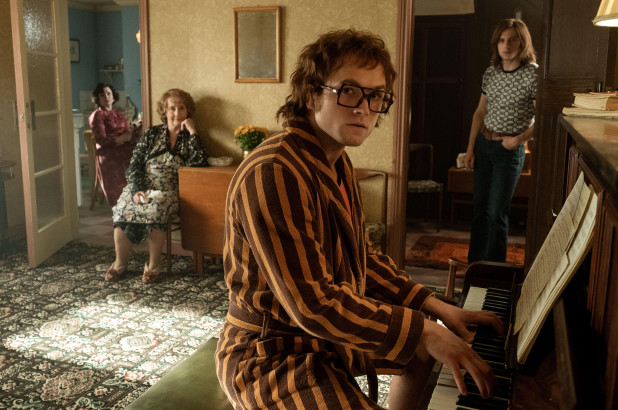 Burning Out His Fuse Up Here Alone

Though technically most of the plot is linear, tracing John’s life from boyhood through the first two decades of his career, the film plays fast and loose with the timeline of when songs were written and the audience is never concretely informed about what year it is as the characters zoom through hairstyles and fashion trends. A framing device of John in rehab recounting these tales gives the storytelling an unreliable narrator twist that enriches every scene. Everything we see is informed by John’s perspective and filtered through lenses that range from the rosiest of coloured glasses (he asserts that he and best friend/lyricist Bernie Taupin have never once gotten in an argument even as the characters argue right in front of our eyes) to harshly unforgiving (his childhood neighbourhood appears so dull it’s almost in grayscale when John’s flashbacks begin; Richard Madden’s manipulative manager is presented as almost cartoonishly villainous, over-simplified in John’s wounded, subjective memory). The film is a musical in the real sense of the genre (not just the Golden Globes “movie about music” definition) with even non-musical characters lapsing into song when their feelings get too big to be merely spoken. It’s all fantasy, drug-fuelled or dream-fuelled, a life remembered the way it felt rather than the way it was.

But the film isn’t afraid of the way it really was, even as it brazenly rejects any notion that truth relies on realism. It took John two decades to get this film made, in no small part because everyone wanted to make it PG-13 and he knew it absolutely had to be R. There had to be serious drugs, there had to be lots of sex, it had to be ugly and hard and fuelled on self-loathing in a way that no PG-13 movie could be. Knowing its rating (and the outrageous fact that it’s somehow, in 2019, the first major studio film to depict gay sex), I actually found the sex and drugs depictions fairly tame (there are no needles, no vomit, very little nudity, no graphic descriptive language- it’s telling that the acts’ very inclusion is considered so controversial). It’s the self-loathing that’s hard to take. John’s depression, narcissism, and self-destructive tendencies take centre stage early and often. The homophobia he faces is less violent and more heartbreaking in its insidious promotion of total despair. Though in a physical sense Taron Egerton is a bit too pretty for the role, the ugliness of the film’s central character portrait imbues the musical fantasy with palpable harsh reality.

I normally am first to the pulpit with a “the subject of a film should never be its producer” sermon but there is incredible pathos in the sheer amount of self-awareness and mea culpa on display in Rocketman. It’s almost as if John’s Executive Producer credit (and his husband’s first-hand producing work) is part of the meta storytelling, the unreliable first-person narration and unflinching no-excuse introspection manifesting itself as some sort of theatrical Eighth Step. Maybe screenwriter Lee Hall is just very persuasive and John trusted Egerton enough to risk the unflattering portrait but there’s something really moving in the thought of modern day John finding peace in embracing the faults of his younger self, accepting and admitting his imperfections without centering them in his sense of self-worth.

There are huge swaths of Rocketman that are ridiculous, totally over the top, too emotionally explicit or stylized in a way that would surely make you roll your eyes if it caught you in the wrong frame of mind (the sequence set to the titular song is surely a litmus test for your reaction to the whole film- I found it mesmerizing but, if the film’s hyper-theatricality isn’t working on you, few sequences will grate more). But the high-flying fantasy of it all is smartly tethered to a single earthbound love story, the quiet emotional nuance of which beautifully balances out the film’s grandiosity.

Almost as much as Rocketman is a singular character study, it’s a love letter to the relationship between John and Bernie Taupin, the straight man (in both senses of the word) who is John’s anchor, inspiration, confidante and partner. Jamie Bell gives a thoughtfully internal performance as Taupin, contrasting Egerton’s mercurial showmanship with understated man-behind-the-man steadiness. Their connection is effortless and unshakeable from their first scene together, the juxtaposition of that strong connection and the relationship’s slowburn angst defining the film’s most compelling subtextual conflict.

Taupin plays his own version of John’s rock & roll lifestyle spiral in the background, a less dangerous but still clearly unhealthy reaction to sudden success observable only if you think to pay attention to Bernie, which you don’t, which is part of the point. Bell’s excellence is most unmissable in a showstopper early scene in which John puts music to Taupin’s words for what would become their first major hit “Your Song”. It’s a rare scene that director Dexter Fletcher shoots with the focus mostly on a perspective outside of John’s. As we watch Taupin listen, Bell silently sets up the whole rest of the film. In his reaction, we instantly understand the power of John’s music and the effect it has on audiences even if our own experience of Elton John fandom is perhaps less intense. More personally, Bell brilliantly captures the very particular thrall of witnessing someone you love do something extraordinary and knowing even before he does that nothing will be the same from that moment on. The character-defining and heartwarming effect of Bell’s performance in this scene gets a booster shot with the pure joy he plays in the scene that follows at the Troubadour when he sees John connect with a live audience for the first time.

Before any of this, there’s a beautifully undramatic interaction in which Taupin kindly rebuffs John’s advances with the tried and true “I love you but not in that way”. This scene between two nobodys who are about to be somebodys is the one and only time John will externalize his feelings for Taupin but it establishes the unspoken reality that the one person in the world who loves him unconditionally is incapable of loving him the way he wants to be loved by him. There are times throughout Rocketman when John’s behaviour threatens to push the audience too far. The gamble of the film’s unflinching honesty about its hero’s darkest moments means testing the audience’s tolerance for bad behaviour but the emotional subtext that the Taupin relationship gives John’s actions is empathetically clarifying. Though Hall smartly never gives him the dialogue to express it, Egerton is able to communicate a world of hurt every time he looks in Bell’s direction, one man coming to represent every feeling of unworthiness and unlovability that tortures John no matter how many fans scream his name.

It’s that gulf between how the world sees him and how he sees himself that most encapsulates John’s tragedy. All the outside validation in the world can’t convince him that he’s worth fighting for. It’s only when the film’s main story catches up with its framing device and John starts to share his life from the beginning that he’s able to forgive himself and see his own value beyond the piano man with the sequinned headdress. The exuberant musical fantasy and dark human reality of Rocketman are not mutually exclusive- they’re equally true and equally worthy and equally totally Elton John- and in the meeting of these two seemingly incompatible modes lies the ultimate redemptive power of Rocketman not just as a self-contained film but as a meta-narrative of a man telling his own story.