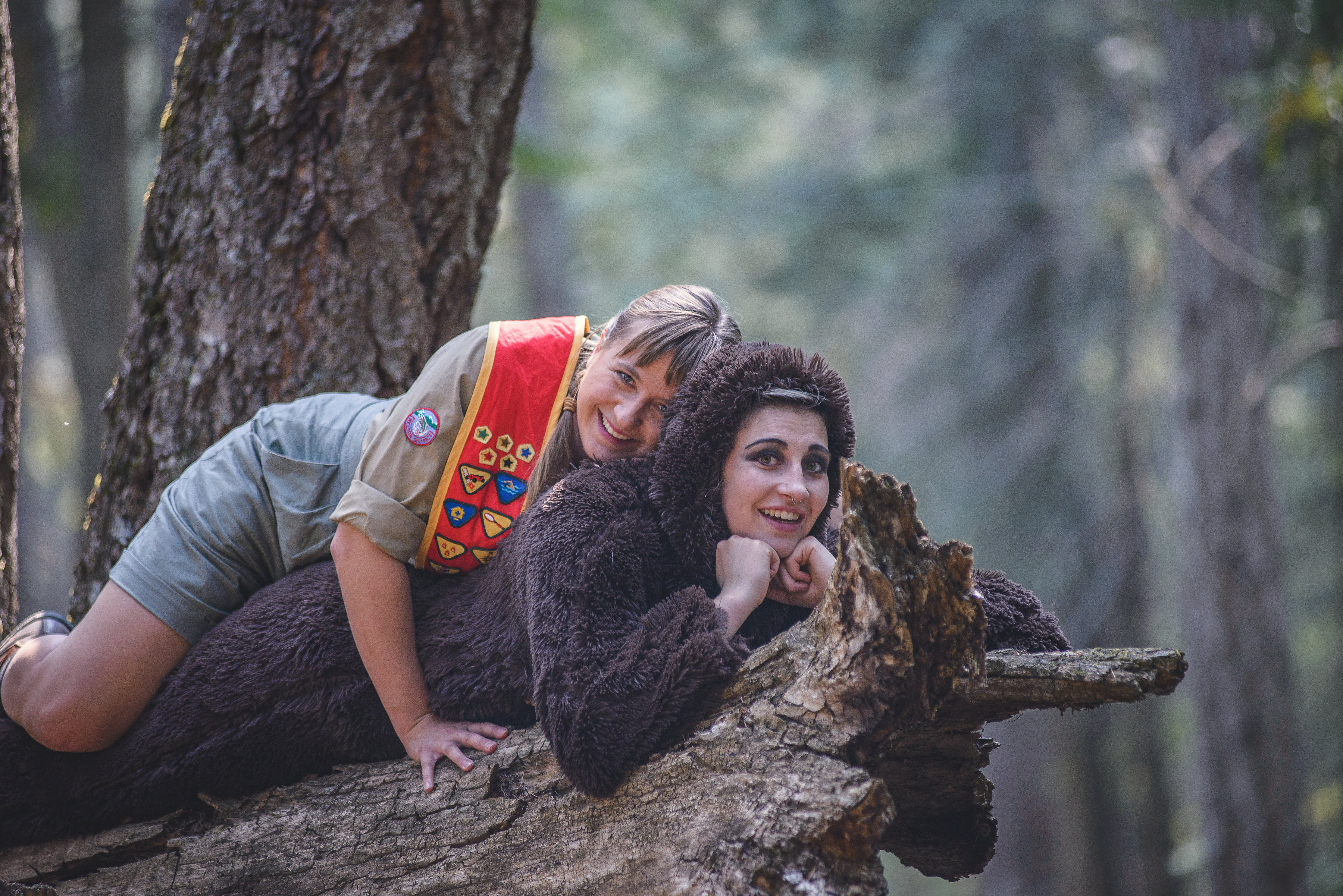 The Saskatoon StarPhoenix described Holly Brinkman and S.E. Grummett’s Pack Animals as “If Tina Fey & Amy Poehler made Moonrise Kingdom… but more gay.” Now the show is coming to the Toronto Fringe Festival where it will be playing at the Randolph Theatre July 4-13, 2019.

The press release pitches the show like this: “interweaving musical and physical comedy, puppets, and searing cynicism, Pack Animals offers up a queer camp adventure through the untamed forest of gender roles, sexuality, friendship, and bushcraft” but we caught up with the team to get a few more details in time for Fringe.

What is Pack Animals about and where did the idea come from?
Pack Animals is about two rivals: a multi-badged Cub Scout and a wildernessly-inept Girl Guide who get lost in the woods. Inspired by co-creators Holly Brinkman and S.E. Grummett’s experiences as an overachieving Cub Scout and a slacker Girl Guide, respectively, Pack Animals offers up a queer camp adventure through the untamed forest of gender roles, sexuality, friendship, and bushcraft.

Pack Animals is a creative partnership bred out of Fringe itself. After meeting at the Montreal Fringe in 2017, Holly and Grumms decided to create a show that parodied these experiences as a Cub Scout and Girl Guide, as a way of unpacking the gender binary. While creating this show over the summer of 2018, Grumms was able to discover their own gender-queerness. Supported by fellow touring Fringe artists, Grummett came out onstage to friends and family in the audience while premiering the show at their hometown Fringe. This year, by taking this show on the road, Pack Animals hopes to empower fellow genderqueer and questioning folks across North America who may be having a similar journey.

Tell us about the cast and creative team involved.
Holly Brinkman (she/her) is a multi-award winning storyteller from Victoria, BC. A mas­ter’s student and alumni from the University of Victoria, Holly is a teacher by-day and raunchy vaudeville performer by-night. Since 2010, Holly has worked as a staff member of the Montreal and Victoria Fringe Festivals and a performer with her solo-show, A Woman’s Guide to Peeing Outside.

S.E. Grummett (they/them) is a puppeteer, clown and theatre artist from Saskatoon. After graduating from the University of Saskatchewan, Grumms fell in love with Fringe theatre and has spent the last three years touring across North America, with SCUM: a manifesto, and Girl in the Box. Grumms is currently devel­oping a solo physical comedy, Something in the Water, that will debut on the Fringe circuit later this summer.

What are some of the rewards and challenges of making the show part of the Toronto Fringe?
Toronto Fringe will be our 4th festival of 7 this summer. We’ve been on the road since the beginning of May, touring to Orlando, London, at Ottawa previously. Touring life is never easy – living out of a suitcase, driving km after km in search of the next festival, staying at some nightmare billets. But touring also gives us the opportunity to travel to new places and meet a wonderful community of artists and audience members. We are so excited to bring this piece to the Toronto Fringe this year — we love their commitment to diversity and inclusion. And the PostScript Patio, of course.

Why is this a can’t-miss production?
This is the raunchy, queer, feminist, vaudeville, sing-a-long show you’ve been waiting for (did we mention there’s puppets?). Each performance also features a different guest artist each night, as our guest Mansplainer. Pack Animals was been shortlisted by Orlando Sentinel as one of their top picks of the 2019 Orlando Fringe Festival and won both Critics’ Pick and Best of Fest at the Saskatoon Fringe Festival last year.

“Pack Animals is an unapologetically feminist, queer, and absolutely hilarious camping trip through the woods. The show, in all its daring risks, is what makes Fringe worth checking out.” (Capital Critic’s Circle, Ottawa).

“Underneath everything, telling a story of love, friendship and equality Pack Animals is definitely more than meets the eye.” (APT 613, Ottawa)

Where/When is the show happening and how can we get tickets?
July 4-13 at Randolph Theatre (736 Bathurst St.) as part of the 2019 Toronto Fringe Festival. Tickets available HERE.