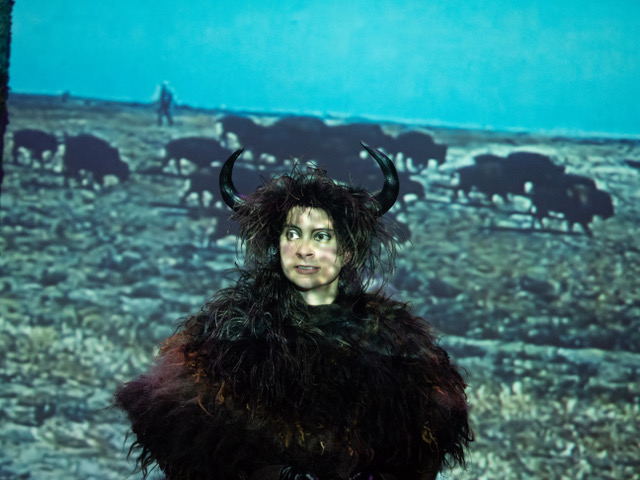 The Buffalo Play at The Tank

Have you ever been trapped with your thoughts after making a mistake? Have your thoughts ever manifested a buffalo? A talking buffalo? Please stay with me here. The Buffalo Play, currently running at the The Tank until May 23, almost lost me before it even started once I realized a human would be dressed as a buffalo. I even lamented to my friend, “Oh lord, what if it talks? Are we about to watch a character talk with someone dressed as a buffalo for over an hour?”. Clearly, I was doubtful.

Based loosely on true events that occurred in Yellowstone National Park in 2016, this play, written by Ciara Griffin and Kendra Potter, settles the audience inside a county jail cell with a woman from New York with a degree in Social Justice who is awaiting her trial for causing the euthanization of a buffalo calf after she put it in the back of her car because she thought it looked cold. The calf was consequently rejected from the herd and would not be able to survive on its own. The woman is not alone in the jail cell though. She is face to face with the mother of the calf she is responsible for killing.

The woman (Ciara Griffin) is your stereotypical, Brooklynite social justice warrior who is a vegetarian except for at weekend brunch when she eats bacon. She’s quick to emotional upset over a headline she read, but had to get to yoga class so didn’t have time to read the whole article. Despite her heart being in the right place, it is easy to think of her as stupid and selfish and you wouldn’t be the only one who thought so. Throughout the show we are given glimpses of the outside media circuit of what is being reported on the story and how social media is reacting. We watch as a woman is ridiculed for a mistake she made when her intention was only wanting to help. Not only is she being ridiculed in the media, but she must face her own conscience – the buffalo. All my worries about a talking buffalo are put to rest within the first 5 minutes of the show as Kendra Potter‘s brilliant personification of the buffalo is surprisingly rather enthralling. She presents us with nature’s perspective on the events that took place. We follow her through the stages of grief as she mourns her lost calf, confronts the woman with rage, and tries to find an understanding for human ways. The woman is eventually joined by a new cellmate, Hank (Jeremy Sher), who is a local rancher arrested for drunk driving. He is most amused to find himself roommates with the woman who was stupid enough to put a calf in the back of her car, but Hank has made his own mistakes this evening. Through the conversations between the woman, the buffalo, and Hank we are challenged to consider the relationship humans have with nature. They face the realization that nature is constantly changing, evolving, and is not necessarily something that can be saved by humans or even needs saving.

I would be remiss if I did not mention one of the standout (and most adorable) actors, Sukha Belle Potter, as the Baby Bison who assists with guiding the character’s reconnection to their ancestral connection with nature and self-forgiveness. Another standout was the sound design, by Peter Musante, who did a superb job transporting us from the theatre to a jail cell outside Yellowstone to the storm of media.

So head on down to The Tank, support non-profit theatre, and allow The Buffalo Play to challenge your worldview on nature and an actor playing a talking buffalo.