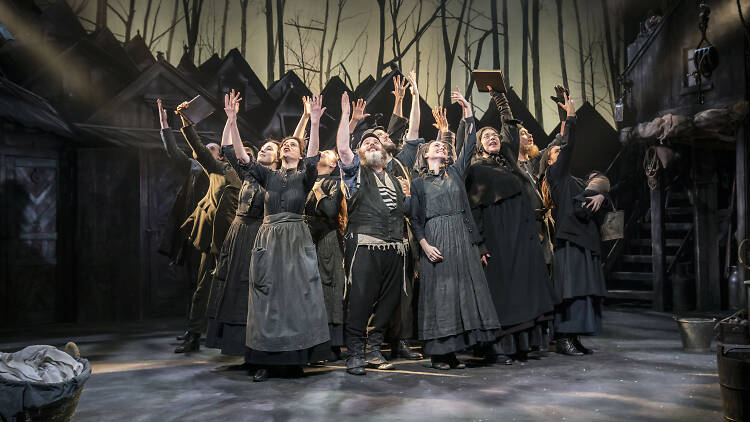 Fiddler on the Roof at The Playhouse

A warm and engaging revival of a classic musical, Trevor Nunn’s Fiddler on the Roof has heaps of heart as it tells this tale of family, community and solidarity.

Set amongst a small Jewish settlement in Imperial Russia during the early 1900s, Fiddler on the Roof’s themes are surprisingly still relevant. The story carefully balances internal family struggles with wider tensions between the Jewish communities and Russian rulers. Jospeh Stein’s book is very well written and Nunn maximises every ounce of the material he has to play with, creating production that is both an emotional and joyful.

Andy Nyman is incredibly charming as Tevye, full of charisma and cheeky humour. He brings a natural and nuanced feel to his musical numbers coming across as likable and relatable. Throughout the show his character’s beliefs and traditions are challenged, and you can see this internal conflict through Nyman’s performance.

Nyman is backed by an excellent ensemble performance who collectively create the bustling and busy community. Amongst the cast there are also numerous standout performances. Judy Kuhn is straitlaced but caring as Golde. Her relationship with Nyman is subtly beautiful, climaxing during “Do you love Me?”. Molly Osbourne, Harriet Bunton and Nicola Brown all put in strong performances as Tevye’s three oldest daughters. Each has their own distinct personality and in turn break away from the traditions and rules of their orthodox community. Their respective conflicts with their father are all personal, real and touching.

Special mention should also go to Dermot Canavan who puts in a hilarious cameo as Lazar Wolf. “To Life” led by Canavan and Nyman is a highlight of the show and just one of a handful of occasions where Jerome Robbins and Matt Cole can really show off their choreography. Jerry Bock’s score, while beautiful, does not particularly challenge its performers, but under the careful leadership of Paul Bogaev, the cast and band create a lovely sound.

Robert Jones’ set is absolutely sumptuous. The cluttered wooden village totally takes over The Payhouse, almost overgrowing into the auditorium. There is so much detail in his design, that makes the grand West End theatre feel almost claustrophobic. Jonathan Lipman’s grey and simple costumes are appropriate and used effectively to show the divides between the communities.

This is an impressive revival to add to Nunn’s ever growing tally, of a fan favourite musical that continues to stand the test of time. Andy Nyman should be praised for his turn at such a famous role but the whole ensemble should also be collectively praised for their roles in this great production.