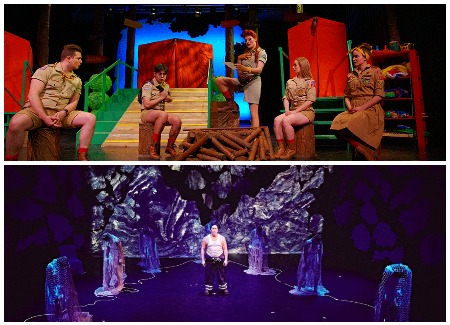 On Stage in TO: Remounts

Two shows that had smaller stage runs when they first debuted are back in Toronto, with more room to breathe.

At Factory Theatre, Bears is back, after a far too brief run (just ten shows) at the Theatre Centre last spring. Created out west by Aboriginal Performing Arts and Punctuate! Theatre (whose Matthew MacKenzie both wrote and directed), the show’s initial run was missed by plenty of theatre viewers and critics alike, but those who did catch it raved that it was one of the most thrilling works of the year (those members of the Toronto Theatre Critics Association who did, championed it to a co-win for Best New Work of 2018 award, shared with Hanna Moscovitch’s Bunny).

Given an expansive remount at Factory, it’s easy to see why; it’s a dazzling trek across a landscape populated by butterflies, fish and insects, though our hero Floyd (Sheldon Elter), on the run after a mysterious workplace incident, can never seem to escape the encroachment of industry and mankind. Elter’s burly physique and powerful stage presence anchor the show, but it soars thanks to the sublime choreography by Monica Dottor and her eight chorus dancers, who sometimes swirl around Elter like Disney animals, aided by the light projections of Environmental Designer T. Erin Gruber. (Amusingly, the chorus also voices the play’s saltiest language in unison.)

The Factory Theatre mainspace’s height and broad proscenium stage certainly help with the play’s grandeur, which extends to MacKenzie’s language; Floyd, whose journey is transformative in many ways, muses prosaically as he cuts cross-country, and waxes more poetic when he’s closer to nature (and further from the highways and industrial sites). It’s almost a dreamscape at times, and we can’t help but wonder if he’s turning into the titular beast, or just connecting to his roots. Some of those moments are punctuated by visits from his always-watching Mama (Tracey Nepinak), who is often still at the side while the dancers swirl and contort. But it’s those dancers you’ll likely most remember – popping up as prairie dogs, blooming as “wild tiger lilies!”, as Floyd exclaims in wonder, or splashing past him as jumping salmon. Them, and Elter’s gravitas.

Over at Hart House Theatre, Kat Sandler’s Retreat, first staged at the now shuttered Storefront Theatre, has received a remount courtesy of director Claire Burns, who was Storefront’s GM (and is the current Managing Director, Co-Artistic Director and Artistic Producer at the Storefront Arts Initiative). Burns, who’s previously displayed a love and faculty for high camp in her play Human Furniture, has an ace in the hole bit of casting: Pearle Harbour, the drag persona of Justin Miller. Harbour, playing the overbearing and vulnerable Candace Matchwick, a precariously hinged scoutmaster and camp owner entrusted with four interns from a law firm, receives a grand first entrance upstage from a lavish tent; the whole set, designed by Christine Urqhart, is a sizeable upgrade from the shoestring black box premiere of the very funny and very dark play, which sees mismatched interns turning increasingly Lord of The Flies over a perceived competition for a plum job after the titular retreat. The set’s use of space actually suggests a series of lovingly plotted out tents in a forest (aided by Steph Raposo’s lighting, which convincingly portrays time passing from day to night and back again).

It’s a smart move by both Burns and Hart House, programming an earlier work by the now Dora-winning Sandler, who’s out west at the Citadel readying the premiere of two shows, The Candidate and The Party, designed to run simultaneously at that theatre. Retreat‘s rapid-fire dialogue and savage humour will no doubt appeal to the college crowd; (Sandler has previously described her work with Theatre Brouhaha as “theatre for the HBO generation”). And for those who have yet to see Pearle Harbour in one of her hit solo shows, she’ll be a Baby Jane-esque revelation. The interns – Tony Tran, Terri Pimblett, Brittany Clough, and Sebastien Biasucci (who perhaps fares best as a preening alpha male) – dig into Burns’ motif and Sandler’s lines with relish. But it’s Harbour who is the queen bee in these woods.