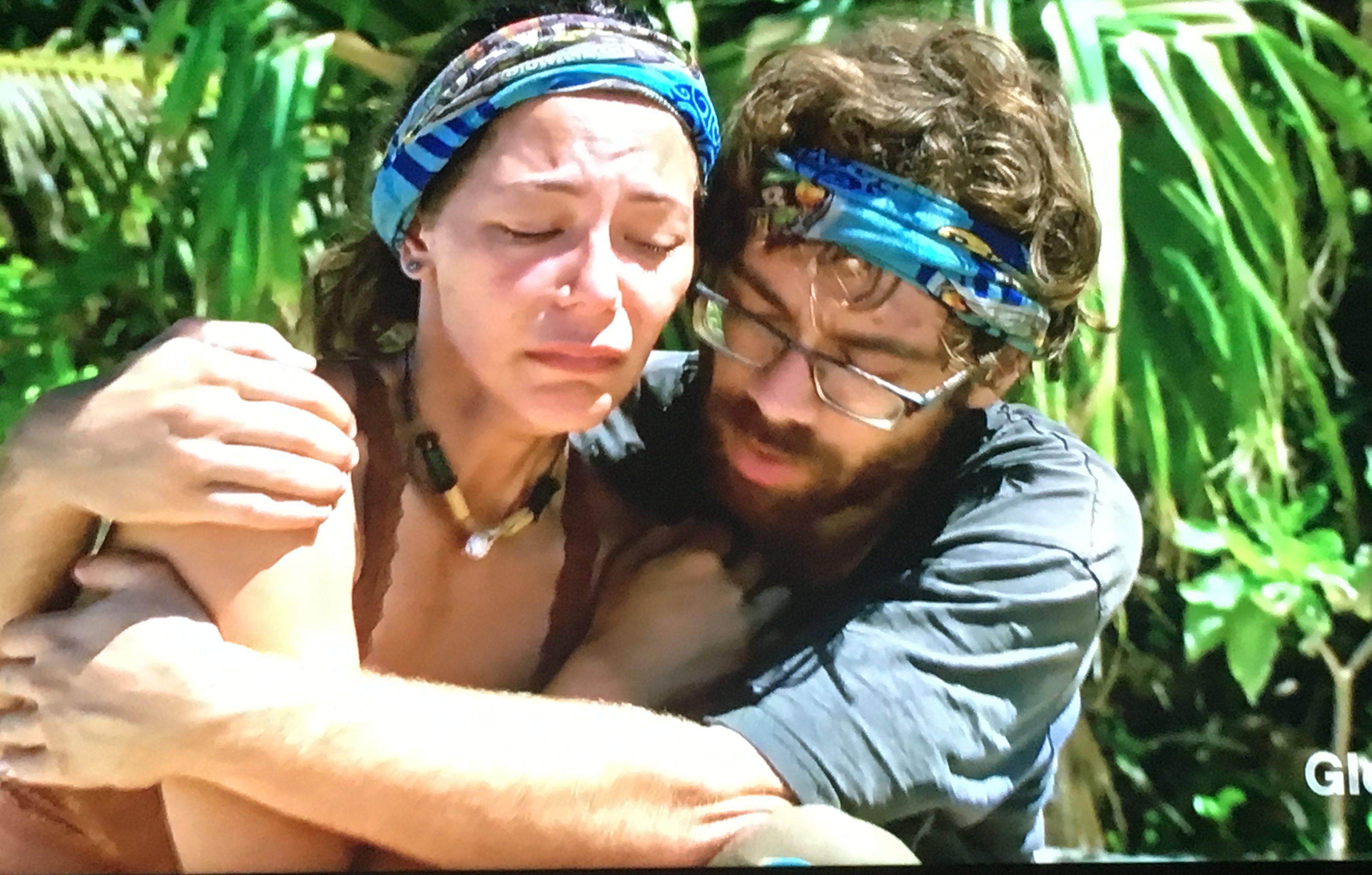 The gender balance is even! The immunity field is wide open! People are correcting Probst on his word choice! This season continues to be iconic! Historically, double episodes are put together because at least one of them is underwhelming on their own. Since both eliminees were not people that had any major shot at winning, and one was a unanimous vote, I can see why they would choose these two, but the fact that these were some of the duller episodes of the season and were still fantastic only solidifies how pleased I have been with the season as a whole.

The main arc set up in these two episodes is that in a blink-and-you-miss-it turn of events, Carl has become a ringleader. He is drunk with power off of his idol nullifier play, which I would like to point out isn’t impressive just because it’s new. He got it by random chance with the buff draw, and it’s sort of a no-brainer to play it on your target when you’re down in the numbers and have an extra vote to make sure that you even out the numbers. Nevertheless, he becomes the Godfather and the number one target on the board, after of course Alec, who became a target due to actual skill. I have to say, hubris aside, Alec is kind of a treat, and the biggest surprise of the season. The way that he narrated Christian and Gabby being the two hottest girls in school and applying his bartending skills to the game (and thus setting up a chain of every contestant telling us how their career relates to Survivor in this episode) gave me a good chuckle, which is more than I can say for most of the dudes cast in his archetype. I do feel bad that a superfan like Alec got taken out in such a conventional spot for his type, but you have to think that nine times out of ten Alec goes out early-to-mid merge, so it’s hard to foresee too many other ways this could go, even though he did play his heart out and showed a bit more strategic prowess than I was expecting.

Carl’s newfound confidence prompts him to make a move against Alec, introducing us to the fact that Angelina is now effectively a David, and to her knowledge, she has displaced Gabby. This is a tough thread to follow because even with how close Gabby and Alison have become, which has sowed distrust between Gabby and some other Davids, I’m unclear on how anyone could possibly think that Gabby and Christian aren’t working together. Even if she appears on the bottom of the alliance, either Gabstian are doing an amazing job of hiding how close they really are, or Angelina is in dream-land thinking that she can actually be as integrated into the Davids as Gabby was, even if Gabby was on the bottom. Either way, the point here is that Carl is so brazen in his planning that he thinks that even Kara will fall in line, which the show presents as ridiculous, until Kara actually does fall in line and it’s a unanimous vote against Alec. Still, the foundation is laid out for a move against Carl, now that women from both sides of the aisle are mad at his shot-calling (and shotgunning, given how many beers he drinks in a short amount of time). I think the main takeaway of this episode is to never find yourself on a booze cruise with Carl, because how close he was sitting to Kara will haunt me for weeks to come.

The best part by far of these two hours was what transpired in the first immunity challenge itself. First, seeing the last three remaining people care so much that it brought all of them to varying degrees of tears speaks to why this cast is so great. Really, truly giving a shit is half the battle of being a great Survivor character, and you can tell that only insurmountable physical limitations will stop them from achieving their goals in this game. Huge shout out to Gabby for her performance in this challenge, and continued proof that crying isn’t weakness, because she’s one of the strongest people, both physically and emotionally, to play this game. I have been a more reluctant supporter than the average Christian fan, but this episode I finally went all in on him. Well, as all-in as I can be while still liking two contestants better than him, but it’s not his fault that Gabby and Angelina will never be replaced. I loved him in this challenge. He, combined with skillful hilarious editing, totally won me over with his charisma and utter eccentricity during his storytelling. Normally I hate a man who can talk for hours, but Christian’s self-awareness and genuine humor make it clear that when he blabs for too long or is over-the-top, it’s a choice, not a fault. I am a little ambivalent about the way the edit, while entertaining, did continue to push the David vs. Goliath theme in a slightly annoying way – the montage of Alec getting progressively weary while Christian drones on with his stories sets it up as though even in a challenge of pure physical endurance, Christian manages to use mind over matter and somehow use his mind, or wit, or some other non-physical property to outlast Alec. I think it’s a little cheap – why can’t Christian just be brawn and brains? While it’s charming, I think he deserves credit for just plain out-muscling Alec, and Alec deserves the dignity of going out like the champ he is. It’s a slight critique, but it comes from a place of just wanting everyone in this cast to get their due, which is a credit to how great the editing has been overall. Except Nick. We are pretending that he did not find his idol under effectively a huge flashing sign that says “IDOL” and simply choosing to revel in the fact that he was left out of the vote in the Carl vote and will hopefully find himself out of the loop for enough weeks that his idol can’t save him.

Other odds and ends include Davie winning two straight challenges and giving me life by explaining the concept of a “black card” on television to Mike White, Gabby’s letter from her mom mentions that she doesn’t just say, she does, and she reiterates this sentiment at tribal, asking if they are just going to sit around and talk about it or if they are going to actually make a move, and Angelina is a master negotiator that for some reason really annoyed a lot of misogynists on twitter. We stan a haggling legend!

Until next week, try not to eat too many wraps this Chanukah!