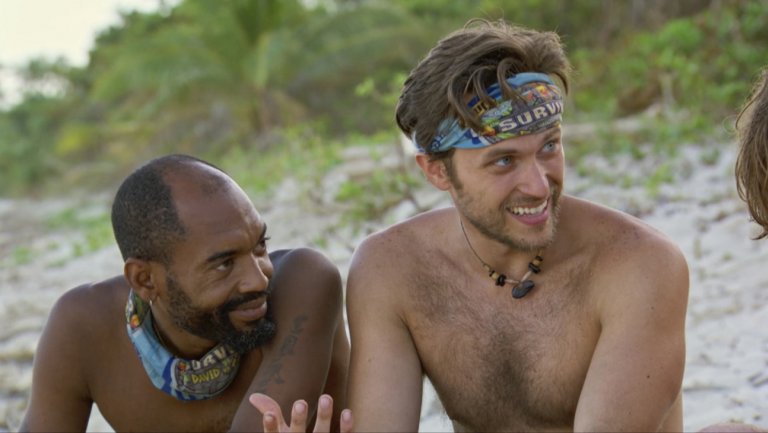 Perhaps it’s due to the recent holiday that I am thinking about gratitude, and what we as viewers are thankful for when it comes to tribal councils. Sometimes we find gratification in blindsides, in a potential winner being taken out when we least expect it. We often find excitement in big jury threats being expertly extracted from the game, in power moves taking out power players. Other times, we are just happy to see the worst cast member sent packing, even if we were under no delusion that he had any potential to win the game. Since the merge and even before, the show has been setting up the precipitous decline of Dan Rengering, but this exposition didn’t make his elimination any less fulfilling than our thanksgiving dinners. In fact, it was nice, for a chance, to actually see why someone was voted out, and have all the pieces of the story leading up to it, rather than a great deal of strategy being obfuscated in favor of gobsmacking the audience. Not that those curveballs haven’t been fantastic this season, but it’s nice to get some relief with a multiple-episode story arc that comes to an exciting and logical conclusion.

To add insult to injury to the Goliaths, Davie manages to do what Angelina could not several episodes previously, and comes home from John’s blindside with his jacket in tow, showing the Goliaths that anything they can do, Davids can do better… except winning immunity challenges, of course. Still, who needs an immunity necklace when you have every advantage the island has to offer? Unfortunately for Carl, one advantage he does not have access to is that of luck. For the second time, he is left out of a random draw and is not able to compete in the reward challenge for burgers. I do think that if we’re going to essentially waste time with things as frivolous as reward challenges that don’t yield advantages, we should at least get to witness a schoolyard pick, or bring back the thing where Carl bets on which tribe he thinks will win and then gets to go with them if he’s right. None of this random draw crap, reward challenges contribute so little already! However, one moment that struck a meaningful chord with me was when Angelina returns to camp and has a meltdown over losing out on this reward with her group, which adds to the ever-growing tally of ways that I relate to Angelina, because I too would, and probably have, shed tears over veggie burgers. Until this episode in which she is relatively quiet, I had almost forgotten what it was like to not be constantly nervous that she’s going home.

While Mike is busy playing Survivor in 2003 and hammering home the Goliath strong vibes, Kara decides to go against her man Dan and spills the beans about his idol. At this point, all of the floodgates open, and everybody is scrambling to make deals across the aisle, culminating in the Davids all pooling their advantages and coming up with a plan. This scene would be extra fun if women were allowed to have advantages, but unfortunately that is still not the case in the past several seasons, of course with the notable exception of Lauren Rimmer, and we saw how well that worked out for her.

Unfortunately, one of the things that makes this season so exciting is also what can occasionally make it the most frustrating. Due to the ideological difference ingrained in them since minute one of the game, the Davids and Goliaths seem to be much more deeply divided at this point in the game than any other season in which there had been this many premerge swaps, which usually mixes up the pool enough to create working connections in every direction, but despite all of these plans to create inter-David/Goliath coalitions, everyone still ends up going with their group (with the slight deviation of Kara and Alec’s contingency plan this episode of casting their votes for Angelina, on the clear bottom of their alliance, just in case of an idol). It’s exciting because it makes for an epic battle between sides, rather than between just two people like in Ghost Island, or one person vs. the field like in HHH or Worlds Apart. These titans are seemingly always men, and while some may like a good coronation story, it just doesn’t do it for me. However, it’s also irritating to watch, over and over again, watch potentially good players like Alison get cold feet and refuse to be exciting, instead forcing the season to rely on well-played advantages to avoid a pagonging. We’re lucky the Davids are savvy, or we would have a lot less praise to bestow around this well-rounded cast, because the best character moments do not come from comfortably and safely playing from the top and picking off those at the bottom. Hopefully now that we are at even strength and the more wacky advantages have been flushed, we’ll start to mix things up before we fall into a rut.

So we wave goodnight and goodbye to Dan, who went out with a bunk idol and few real allies, and ultimately couldn’t be saved by the most beautiful girl on the island, even if she had wanted to. I am very relieved that we will not have to deal with him the rest of the season, even if it means my long-held prediction of being a zero-vote finalist is busted. I am also grateful that the show chose to show us a warts and all portrayal, rather than lionizing him simply because he has overcome difficulties and works in a job that is conventionally considered to be heroic. For now, the Gabby and Angelina train rolls ever onward, and until it crashes I will be riding high on this season. All aboard!