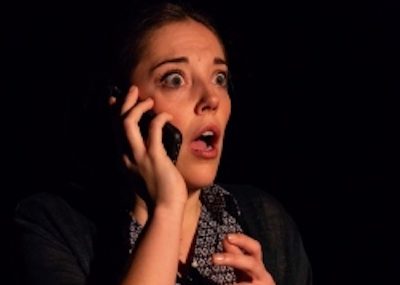 After a run at the Edinburgh Fringe, Maddie Rice brings her comedic one woman show Pickle Jar, directed and developed by Katie Pesskin, to the Soho Theatre in London and delivers a skillful and hilarious performance. Rice successfully establishes the world of her main character, known only as Miss, as well as cleverly portraying all the rest of the characters. With skilled, professional acting, as well as a tight comedic script with a clever twist, Pickle Jar draws big laughs from the audience. The only downside is that some of the contrasting emotional reveals seem to get lost in the jumbled timeline.

Pickle Jar tells the tale of a young, shy English teacher attempting to teach, but also bond with her young impressionable students, whilst at the same time navigating the twenty-something world of Tinder, nights out, ex-boyfriends, and slightly odd flatmates. After the death of one of her students sends her into a downward spiral, we see the teacher struggling with feelings of grief and guilt, that all lead back to the memory of one sinister event.

The main strength to this production is clearly Rice’s acting prowess and ability to deliver comedic one-liners with impeccable timing. Playing the main role as a slightly geeky, middle-class English teacher, which one could argue is a cliché comedy role, Rice consistently delivers laugh-out-loud moments with clever, relatable one-liners about her life, and humorous self-confessions. Her moves from character to character are also extremely slick, with the highlight being her Irish flatmate Moiread, whose unique take on life and metaphoric advice provides a nice dose of surreal humour. Being able to jump from character to character, with comedic theatricality keeps you on your toes and creates a world that feels three-dimensional and real.

Rice is also clearly a talented writer and the play’s script has some wonderful lines, including realistic dialogue that makes the characters come alive, yet also gives them the ability to deliver emotional blows. The audience doesn’t seem to see the final twist coming, which although alluded to throughout the latter half of the play, is finally revealed in an emotional monologue that demonstrates Rice’s talented acting range.

However, the few downsides to this production are that throughout the play there are lots of subtle references to the final twist that are often lost or lack impact as the story jumps back and forth in time. For instance, the main character’s descent into alcoholism and subsequent emotional outbursts that subtly allude to the twist are often just seen as comedic interludes as the story jumps back and forth between boozy nights out and classroom antics. This unfortunately means that small things that seem like throwaway lines then come back with some significance later on, leaving you struggling to remember them and isolate their earlier usage. Ultimately this means that the ending lacks the emotional impact it deserves, with the the final poignant moment being the main character chocking on a raisin – an homage to an earlier, fairly forgettable and weak joke.

Pickle Jar, in conclusion, is a very accomplished and extremely funny debut play, with Maddie Rice demonstrating her fantastic skills as a comedic writer and skilled performer. Although, the audience may at times have to pay close attention to follow all the flashbacks and plot navigations, it is a pleasure just to sit and watch Rice jump from character to character, delivering big laughs from a script that has clearly been thought out and comedically timed. The eventual twist delivers a real emotional blow and touches on a serious issue that leaves you with the impression that, much like this performance, there is often more to people than meets the eye.