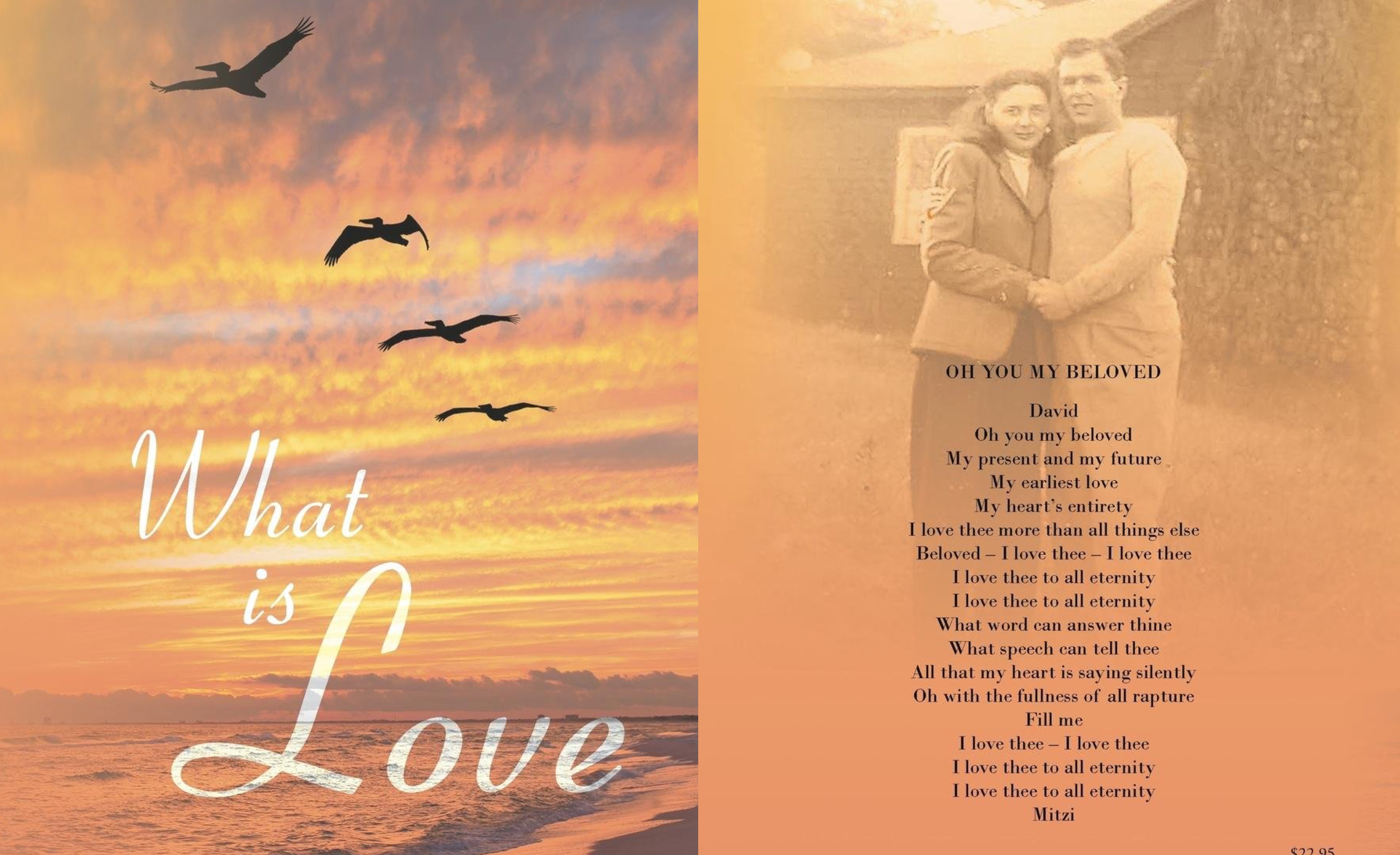 What is Love by Pauli Rose Libsohn

This book is a love letter to Mitzi Libsohn, the author’s mother. It is ostensibly about the love story of her parents and the poetry that sprang from that relationship, but make no mistake, this is about the adoration of Mitzi.

Pauli Rose Libsohn writes about her mother’s early life, chronicling challenging family relationships and her mother’s early academic triumphs, which resulted in her skipping a number of grades. Ms. Libsohn comes as close to a criticism of her mother as she permits herself when describing this situation, stating that Mitzi was neither physically nor emotionally ready for the advancement, and became very introspective and sensitive as a result. The decision to promote young Mitzi was made by her oldest sister, portrayed throughout the book in very negative terms. Mitzi’s mother does not fare much better.

Mitzi herself is described throughout the book as brilliant, talented and a style icon wherever she goes or whatever she does. She meets her future husband at the beach when she is 12 and he is 17. Mitzi introduces David to books and thus begins the epic love story of the author’s parents. I found the story of the early part of this relationship to be off putting, although to be fair, it was presented as a purely intellectual meeting of the minds until young Mitzi was about 17 and their relationship took on a more romantic tone.

The story of the two lovers continues through the years, with the two of them, and later their daughter Pauli as well, becoming more and more successful. They move to finer homes and join more delightful clubs as David Libsohn achieves professional advancements with the help and support of his wife. Mitzi takes on decorating challenges at the behest of the members of various clubs (due to her superior sense of style) and begins to write poetry. Astonishingly, the threesome never appears to disagree or argue. Never a cross word is mentioned, and young Pauli seems to have sailed through adolescence without ever rebelling or challenging her parents. Even after their deaths, she seems to be utterly devoted to them, and worked tirelessly to have her mother’s poetry published and to chronicle their great love story, the result of which is What is Love.

For me, the glimpse into a daughter’s unquestioning and absolute devotion is fascinating and the most compelling thing about this book. When read with an even slightly critical eye, Mitzi Libsohn did not actually achieve great things. She provided decorating and fashion advice to her clubs, maintained her own homes beautifully, wrote some poetry that her daughter published after her death and seems to have had a strong marriage and relationship with her daughter. These accomplishments are not in my mind particularly monumental in terms of the larger world, though they are real and meaningful in the most individual terms. Certainly, to her daughter, Mitzi’s life was imbued with deep meaning and relevance. Ms. Libsohn rather excitedly describes various occurrences that she interprets as signs of how special her mother was, and that events have unfolded as they should, as if pre-ordained. Other signs provide reassurance that her parents continue to be with her, even after death. Some, like statues falling over, are physical, and some, such as her mother’s books arriving three days before her mother’s date of birth, are temporal. All seem a bit far-fetched to this skeptic, but again, an interesting perspective.

What is Love is a true reflection of love – the love of the author for both parents, but in particular her mother. Ms. Libsohn self published this book through Page Publishing Inc. While it could have used more professional editing (too many ALL CAPS, and quotation marks; too frequent use of the word ‘beloved’), the book is Pauli’s own love poem to her mother. In a world where rants and criticism seem ever-present, a wholehearted expression of love is a beautiful idea.