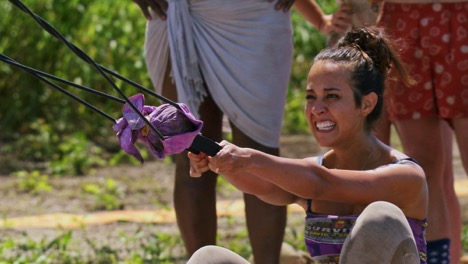 Survivor: David vs. Goliath, Ep 5: A Star is Mourned

Well, it was fun while it lasted. I can’t say that I had a lot of faith that Natalie would survive until the merge, but I held out hope, because if she did I don’t see how anyone would want to get rid of her, since she would be wearing a giant sign that says “Zero Vote Finalist” on it come time for the end game. Maybe all of the love for Natalie was tinged with a hint of irony, but if we can’t be at least a little over the top in our enthusiasm for reality TV contestants that speak to us even though we barely know them, then really, what are we doing here? Natalie is Debbie Wanner with more focus and a broader presence. She’s a teacher who gave you a C but you still kind of love because she’s the only one who will tell the annoying jock in your history class to shut up. She’s an all-star if casting knows what’s good for them.

On the absolute opposite spectrum of charisma, Alec is still here, and delusional as always. In an effort to reassure Kara, he tells her that he views the Davids on their tribe not as an alliance but merely as “extra votes,” which makes no damn sense because THEY OUTNUMBER HIM. You can’t use people for their votes when there are more of them than there are of you! Kara is rightly nervous and claims she’s going to try to “out-charm” Alec, which is a fine plan if Elizabeth, Carl, and Davie are interested in judging a charm-off between two wet pieces of toast. Fortunately we won’t have to see that riveting battle play out this episode, because the orange team will manage to turn it around at the immunity challenge, perhaps powered by my least favorite reward of chickens, which makes it very easy for me to pick my favorites based on who doesn’t want to kill the chickens. I hope that Tai’s popularity has incentivized players to make friends with the chickens as part of a valid strategy to get Sia money and also my undying loyalty.

Ugh, I don’t even want to talk about what’s happening over on the green tribe. If there’s one thing I hate, it’s an all-male alliance. If there’s two things I hate, it’s an all-male alliance, and one of the men in that alliance finding two idols, apparently undetected. Dan claims that he invented the word brochacho, which is not only clearly already a word, but already a word that has been notably used on Survivor back in Caramoan among the Eddie/Malcolm/Reynold contingent. Have I mentioned that i hate this alliance? Dan, the human embodiment of a terrible bumper sticker on a pick up truck, is forced to resort to bringing up his former fat guy days as a placeholder for having an actual personality, saying that “Fat Dan” would be proud of current Dan for finding another idol, as if A) you turn into a completely different person when you lose weight, and B) Fat people are incapable of finding idols? I will be shocked if Gabby and Alison manage to pull something together to blindside this dude next week, but honestly I will also be shocked if he manages to successfully use both idols, so I think no matter what he winds up going out somewhere in the merge here. Or maybe we’ll be stuck with him all season but he gets zero votes at the end. What I’m saying is that I refuse to accept a reality where Dan wins this season.

In the lead for that Sia check over on the tribal-council bound purple tribe is Angelina, who, in addition to knowing the statistics of women who have found idols in Survivor, is also a vegetarian, has officially thrown her hat in the ring for the Survivor contestant that I personally am the most like, challenging the current title-holder, Eliza Orlins. Like Angelina, I don’t eat meat and make all of my most important decisions based around whether or not I will get new clothing out of it. It’s basically why I joined any sports team in high school, and the only reason I will ultimately agree to be anyone’s bridesmaid. In the season’s most clearly telegraphed elimination, Natalie’s demise begins when she makes an executive decision to cook all of the eggs at once rather than Lyrsa’s suggestion of saving half of them for tomorrow. I do have to say, while Natalie is obviously not going about this the right way and should not be willing to die on this hill, I don’t really care how long you went to culinary school, I also would not want to eat day-old island eggs. Also, they were all just evacuated from the whole damn island from inclement weather that destroyed their camp! There’s no guarantee those eggs will even be there tomorrow, unbroken and edible. Eat the damn eggs, it’s only two per person! The most important thing that I learned from this exchange is that apparently it’s possible to graduate cum laude from culinary school. Lyrsa is an increasingly vast galaxy of complexity. She also has a jacket. Angelina wants it. I feel like Angelina got a lot of flack for this because the editors did make her look really silly, but I would like to just reiterate one more time that their camp was destroyed by weather. They had to leave for only the second time in history. Two people have already left the game due to medical issues and we aren’t even to the merge. I just can’t muster one ounce of blame for Angelina doing whatever she can to try to take care of her body.

It seems as though Mike is in the position of power here, since Angelina is voting with her torso and Nick and Lyrsa are voting along David/egg-cooking lines. Mike makes what I consider to be a weak move which is voting based on annoyance. I do get it, he has to live with and potentially be attached to Natalie in the future if he saves her here, but these Goliaths cannibalizing each other is blowing a numbers advantage that isn’t going to work out for them in the long run. While Alec’s move was borne out of totally unnecessary aggressive gameplay, Mike’s is out of stupidly passive game play. He didn’t vote off another Goliath because it was a big move, he voted her out because it was the easy move. Neither of these reasons have anything to do with real, grounded strategy in my opinon, and will leave Alec (and by extension Kara) and Mike (and by extension Angelina) vulnerable should either of them have to face tribal again before the merge, or even at the merge when it looks like they flipped against one of their own, making them untrustworthy for any other remaining Goliaths.

Angelina ends the episode by making one last unsuccessful plea, doing a flawless impression of me the next time an all-star cast is announced, standing hopelessly and calling out, “Natalie?… Natalie?… Natalie?” To no avail. We will miss you, queen Nat.