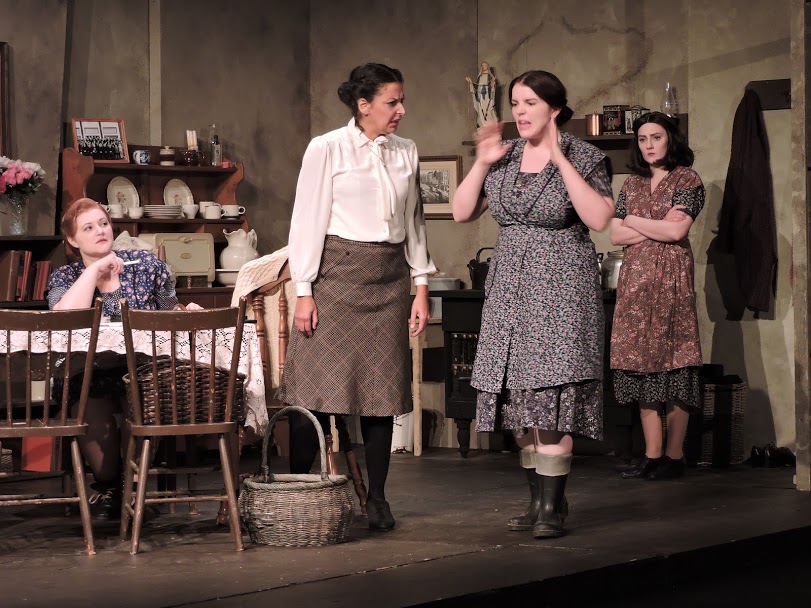 Exploring the distance between what appears to be true and what actually is, Dancing at Lughnasa is a bittersweet memory play about five sisters in depression-era Donegal.  Set in 1936, when Michael is just seven years old, the play juxtaposes Michael’s overwhelmingly positive memories of the last summer his family spent together with his adult self’s reflection on the fates of his mother, four aunts, and uncle.

The Toronto Irish Players production presents Michael as the quintessential unreliable narrator. Seated in the audience before the play begins, Michael quite literally steps out from the audience and onto the stage, indicating that everything the audience is about to witness is seen through his eyes. Yet by his own admission, the memories that Michael recalls most keenly are of the first wireless radio his family owns and the return of his uncle, Father Jack, from Rwanda. There is a sense that Dancing at Lughnasa is not a factual account, but Michael filling the gaps in his half-remembered childhood with what he’s imagined or been told after the fact in order to come to terms with the family members he’s lost. David Eden’s direction cleverly draws attention to the fact that Michael often isn’t even in the room when conversations between the Mundy sisters are taking place. He positions Michael on stage, yet shows him building kites on his own and paying little attention to his mother and aunts in the kitchen.

Michael (Enda Reilly) is an affable host for the evening’s guided tour through his childhood, and Reilly is equally adept at playing the wide-eyed, kite-building seven-year-old version of his character. I particularly enjoyed his scenes with Rebecca De La Cour, who plays spirited homemaker Aunt Maggie with a wicked sense of humour and an optimistic outlook on life.

The other sisters are also believably rendered. Donna O’Regan brings a subtle sadness to the role of Agnes, the most introverted of the Mundys, and has a lovely rapour with simple-minded, fanciful sister Rose (Áine Donnelly), and Erin Jones is appropriately set apart from the others as god-fearing eldest sister Kate, who acts as the matriarch of the family and keeps them afloat with her modest teacher’s wage. It’s Lauren McGuinty who really shines though, portraying Christina’s repressed affection for her unreliable beau (and Michael’s father) Gerry, and the conflict between the practical single mother who knows better than to get her hopes up, and the romantic young woman who still wants to believe.

The choreography is not particularly skilled, nor is its execution, yet scenes of the Mundy sisters dancing show such joyful abandon as they, just for a moment, break free of the patriarchal and religious constraints placed on them by society and enjoy themselves.

Dancing at Lughnasa is not without its flaws. Jones and Donnelly don’t always have the dialect down (at times their Ulster accents sound more Scottish than Irish) and The Toronto Irish Players production is perhaps too subtle in its foreshadowing of hardship to come, but the camaraderie between cast members is keenly felt and the performances are believable. Effectively portraying tensions between the religious and the secular and between change and stability, the Toronto Irish Players’ Dancing at Lughnasa is a quietly compelling character-driven drama that’s well worth a watch.