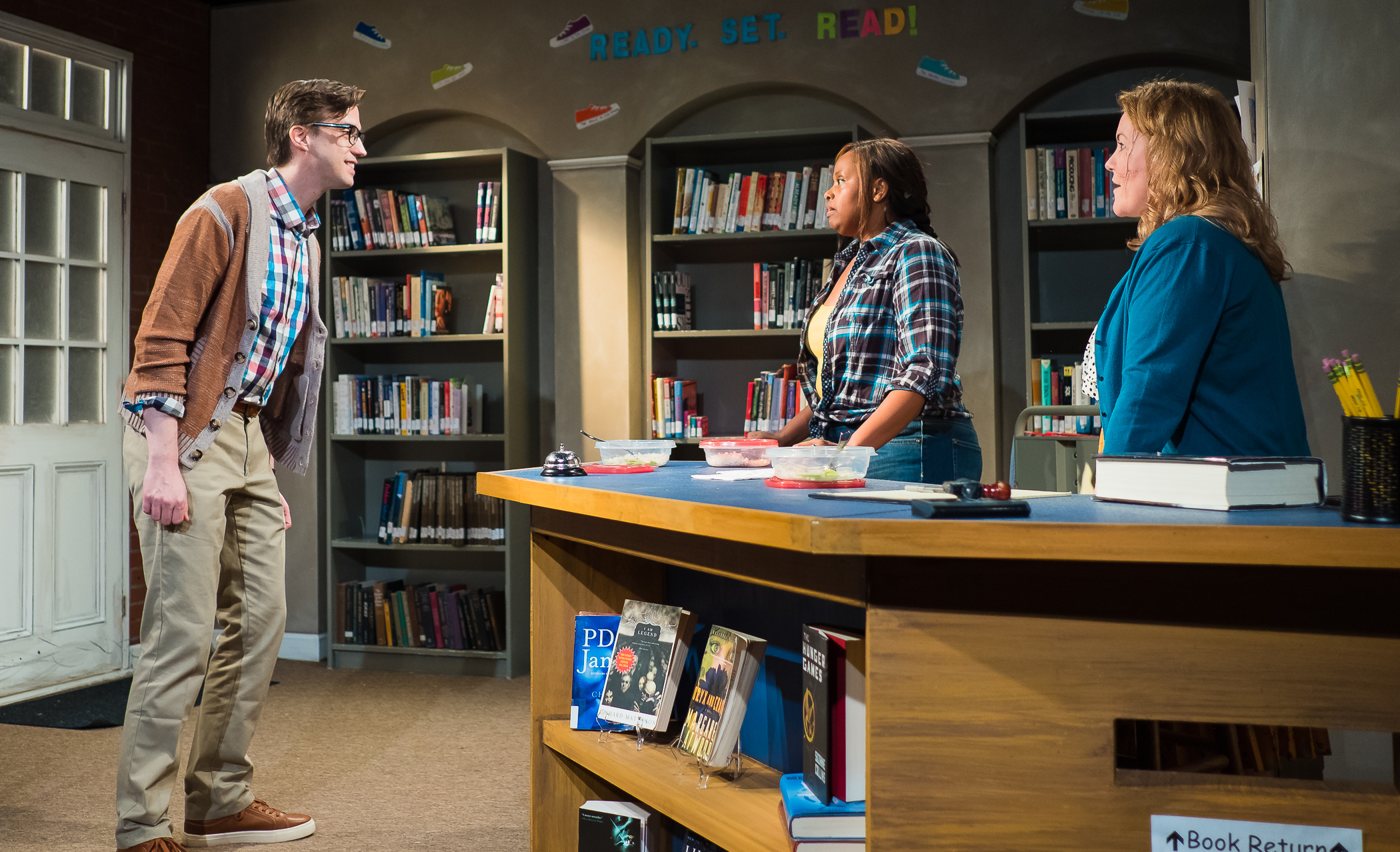 Alexandria begins in a local library in a small town in the Deep South. The stage design is authentic and meticulously arranged. The walls are lined with books organized by the Dewey Decimal System. An old-fashioned call bell sits on an octagonal desk ready to alert a librarian to a patron’s presence. A worn check-out stamp is splayed out. Colorful construction paper letters dole out encouragement and puns (an Autumn-themed décor instructs the reader to “Fall Into Books”). Desktop computers display the nostalgic-ridden 3D pipes screensaver.

Here we meet two librarians, Ray (Stephen Heskett) and Brenda (Kristen Vaughn), two coworkers with starkly different worldviews. Ray is a devout Christian and often finding ways to inject his beliefs into conversation, but in an affable way. Brenda is more reserved about her politics, but is openly gay and soon to be married to her fiancé Pam (Shauna Miles). Their conflicting views are cleverly introduced in the first scene when Ray explains, in a five-minute disjointed monologue, that although he respects Brenda and her right to her choices, and although he considers her a close friend, he just doesn’t feel right attending a lesbian wedding. Brenda patiently listens to his soliloquy and politely informs Ray he wasn’t actually invited. She then finds herself consoling Ray, who is hurt and genuinely mystified why she wouldn’t invite him. The juxtaposition is hilarious and masterfully written. But more than that, there is real authenticity brought by the humanity that Heskett and Vaughn bring to each character. Ray’s clear apprehension during his speech and Brenda’s calm self-control as she quietly listens reveals a precarious but real friendship; it is one that is maintained through each person’s avoidance of delving too deeply into each other’s conflicting views.

This peace is shattered throughout the play, particularly when we meet Brenda’s fiancé Pam who can hardly conceal her dislike of Ray. Pam is assertive in her convictions and is especially turned off by a blog that Ray maintains where he espouses views fundamentally anathema to her way of life. Brenda, who wants to maintain the peace, avoids reading the blog altogether (similar to ignoring Facebook posts of outspoken relatives). But the heart of this play comes out when Pam and Ray get into heated discussions.

These scenes are especially effective because neither Ray nor Pam is portrayed over simplistically. Gatton has a real knack for cultivating rich characters, and tying arguments to personal experiences rather than vague political talking points. The first disagreement ensues because Ray blogged how today’s society is too decadent. Ray longs for a world of the past, arguing that society has changed too dramatically and abandoned certain norms and Judeo-Christian roots that have existed for 2000 years. He laments the world has not only changed, but society rejects people who don’t change fast enough with it. Christians have become the butt of jokes and attacked for not being immediately accepting of causes like gay or transgender rights. Pam counters that as a black gay woman, Ray’s argument of some imaginary past when things were better is ludicrous. For her, now is the best of times. There is no other time in history where a gay person of color would have so many rights (or even luxuries like Netflix she adds).

Brenda who typically keeps out of arguments between her fiancé and coworker finds conflict with Ray inevitable when she eventually reads Ray’s Christian blog and is dismayed by the vitriol she finds. Their differences feel very relevant, and raise the issue of how people can get along when they have fundamentally different views. Brenda and Ray represent an immense and intense conflict simmering just below the polite surface of the characters. And none of this lends to a simple resolution.

But this leads to my biggest grievance with the play. Just when Brenda and Ray are forced to address their central conflict, the equivalent of the Zombie Apocalypse happens (it’s not specified what exactly, but for purposes of this review I’m going to say Zombies), and this conflict is sidestepped.

So here’s the problem: If you are in a heated conversation about politics at Thanksgiving with your in-laws, but the Turkey explodes and the house is engulfed in flames, the most memorable part of the day is not going be the argument about the merits of the capital gains tax. So by jumping from a 5 to a 10 on the Richter scale, the unresolved conflict is conveniently avoided. The Zombie Apocalypse is a new variable that jolts the characters into extreme survivalist positions and avoids the most difficult question– how do we all get along? (Although one might also argue that the Zombie Apocalypse is symbolic of the fact people will never get along).

Regardless of how one interprets the play, the clever dialogue, beautiful set and authentic acting make this a play worth seeing.