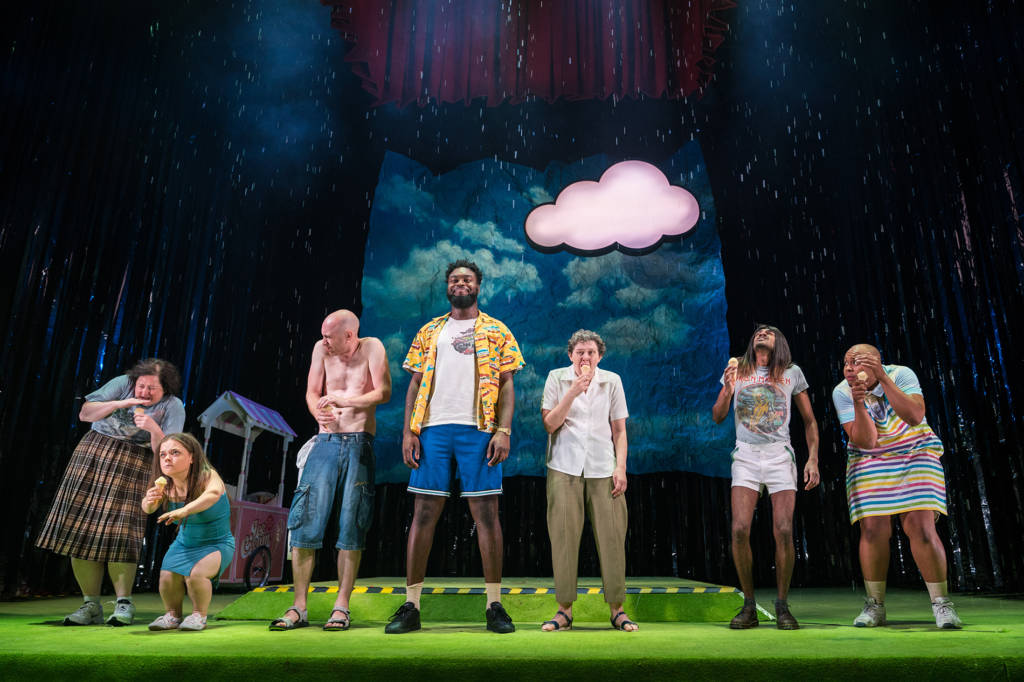 Pity at the Royal Court

Rory Mullarkey’s new play is totally bonkers, and while it does have some laugh-out loud moments, there are too many misfires meaning it ends up plodding along and becomes quite a frustrating watch.

Unapologetically, this is a play deeply rooted in the surreal comedy genre, and it seems likely that it is going to split opinions with audiences. It just didn’t work for me, and this was mainly down to the writing rather than the production itself. I have no doubt that Mullarkey is an accomplished talent (some of his previous writing is testament to that) but with this new piece of work the script seems to try and stretch one idea out and relies too heavily on overdone gags and exaggerated characters. The overall world (or town if we’re being picky) that he creates is inventive and the concept of portraying a disaster stricken community through comedy is fine. However, its bigger moments, such as the Prime Minster signing about sandwiches or a long drawn out war scene are not nearly entertaining enough to powerfully portray the deeper underlining messages.

Set in a typical English town, we see bombs, war and pandemics hit this isolated place through the eyes of a newly formed (and instantly married) couple. As the chaos ensues, the couple encounter many weird and wonderful characters with a backdrop of a collapsing society. Despite being deliberately formulaic and skipping any romance, you surprisingly feel a closeness between the lead protagonists. In fact, Abraham Popoola and Sophia Di Martino are both very likable despite limited character development. Their personal journey through the madness works well, as they find themselves having to repeat, “I’m ok”, to each other, and the last few scenes are rather heart-warming. The rest of the ensemble make the most of their varied characters and produce snippets of well-crafted humour. However, in the most part the characters themselves are so silly that they sometimes become a little annoying. Francesca Mills, in particular, is hilarious every time she is on stage, often scene stealing with her mostly cameo roles.

A real positive part of this production is Chloe Lamford’s bright, colourful and zany set. The pastel colours and cartoonist design really compliment the tone of the piece. Music is a very prominent feature of the production, most notably with a brass band impressively opening the show and returning at interspersing moments during the earlier stages. Sam Pritchard makes use of the set efficiently, incorporating smart production effects into the drama and adding to the humour. Indeed, some of the funniest moments of the play are visual gags using the set. He does rely too heavily on slapstick, however, and allows the action to linger a little too long with some of the jokes.

For too much of Pity the surreal comedy isn’t funny enough and the whole thing seems a bit too silly. I do feel it will find an audience, but it just really didn’t work for me.