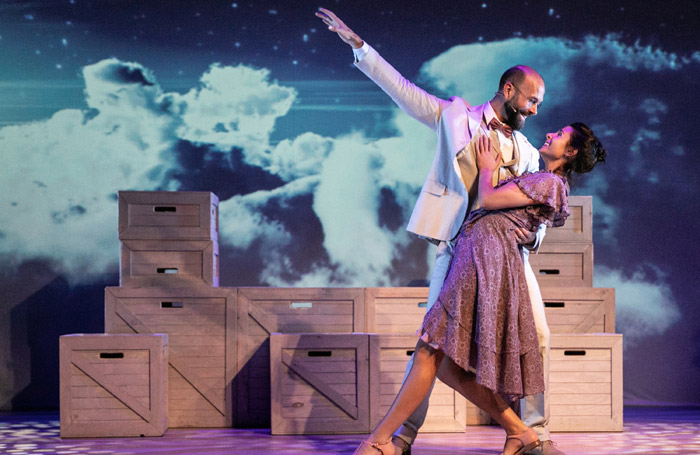 It Happened in Key West at the Charing Cross Theatre

Recent times have taught us that the novel ‘dark romantic comedy’ genre can work in popular culture. Tim Burton even created such a style that is now synonymous with his namesake. Corpse Bride, for example, shows that the motif can succeed in straddling the line between the macabre and the touching without falling too far onto one side or the other. It Happened in Key West similarly aims to hit that sweet spot with its telling of the bizarre yet amazingly true story of the man who continued to live with the rotting corpse of his true love years after her untimely death. While It Happened in Key West starts off well with several bouncy tunes and a comically wry script, it soon descends into repetition and cliché. Its attempts at seeking empathy for the necrophiliac in question, Carl von Cosel, are overt and lack the necessary subtly to foster any true sense of understanding, and though certainly charming, the narrative is perhaps just too jarring to be considered romantic.

Set in the 1930s within the idyllic yet impoverished island of Key West, Florida, the story focuses on the recently shipwrecked and eccentric German immigrant, Carl von Cossel (Wade McCollum). Though from a seemingly brilliant academic background, von Cossel takes a job as a radiologist at the local hospital, whereupon he meets the beautiful yet sickly Elena (Alyssa Martyn). Unable to cure her illness, Elena passes away, but von Cossel’s love carries on. Retrieving the corpse, he begins to live on with her in secret, despite the inconvenience of her being a decomposing corpse.

McCullum is certainly the standout performer in the production, which, in fairness, wholly relies upon his strong presence as an anchor. Most numbers either revolve around him or are predominantly solos, with little from Martyn or the other members of the small ensemble. This is certainly fine in the humorous ‘Elena’ or the sweet ‘At the End of the World’. Yet, the further the show progresses, the more you notice the similarities between songs, and the often-plodding pace of some of the more schmaltzy pieces. ‘Undying Love’, for example, plays for far too long and repeats an unwelcome amount.  It is a shame that one begins to tire of McCullum’s voice the more the show reaches its predictable though unrealistic conclusion. The production’s pace certainly slows and drags in the second and third Acts, as showrunners Jill Santoriello, Jeremiah James and Jason Huza seem to run out of ideas once Elena is in the grave.

A flawed production, It Happened in Key West is an interesting idea and at first, succeeds like romantic comedies of the past. The odd couple dynamic works between the two leads, and the script is light and humorous enough to take the audience with it in the first half. Yet, at the juncture at which the show goes into the dark territory, it doesn’t quite get the tone right and becomes a rather unconcealed attempt to draw empathy without any nuance or interesting plot device to support it.  Not quite bad but not good either, it is a shame that It Happened in Key West never really comes to life.