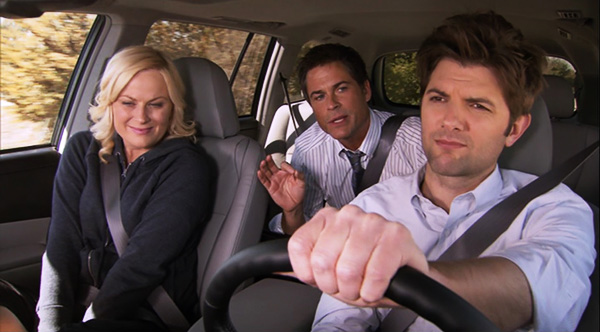 I’m beginning to wonder if there’s something otherworldly about this Parks and Rec. With each new season I watch, the cast seems to get stronger, the writing seems to get better, the narrative seems to be more intricate, more magical. I don’t think I can name another show where things improve so much from one season to the next.

Enter season three. After a government shutdown, the team comes back to an entirely different department. The burgeoning sense of hope and luck that the show carried with it remains, but there is a lingering sense of trepidation, of small fear. Chris, the new city manager, has yet to be fully humanized, other than a relentlessly positive man-machine who dates Ann Perkins. Leslie doggedly advocates for the Harvest Festival, which becomes a climax (if not the climax of the season), and puts the proof in the pudding that she knows what she’s doing and she’s got the potential for so much more, as we know to look for in season four. And amid them all is Ben Wyatt, former failed mayor of Partridge, Minnesota.

Ben is an anachronism to Parks and Rec, in so many ways. He’s more than a bit uptight, but capable of making flexible choices, like his decision to stay in Pawnee at the end of “Flu Season.” He’s socially awkward to the extreme, as we see him flub and falter on every TV appearance in “Media Blitz,” but manages to win Leslie Knope over with his boyish charm. In a show where everyone is almost one character type – Tom is swagger, Andy is excited, April is dark – Ben is two different shades of weird. He has this nerdy, serious side that is easy to make fun of but also demands respect at work. His other side, which gradually emerges throughout the course of the season, is passionate, loving, strong-willed – in short, everything that Leslie falls in love with. An argument can be made that sure, she falls in love with the dorky Ben, too, but that takes a lot longer reveal in the show.

I don’t often identify with comedies, or find myself wanting to identify with them in many ways. When I do, it’s because they’re showing a concept that looks fun, like Whose Line is it Anyways or Seinfeld, or because they’re dealing with a real situation in a ridiculous manner. Parks and Rec has so many moments that I identify with because of the strength of the characters they use to carry the narrative forward. I love Andy’s eagerness to be useful in every possible situation, no matter how unsuited he is for the task. I respect April’s youthful unwillingness to do anything, to try anything, because sure, there are some days where I feel like her, like saying no to everything anyone wants to ask of me. Even Jerry, who just wants to retire in two years and is constantly a klutz, has a simple dream people can relate to. But when they first introduced Ben Wyatt, I had a moment of terror, of fear of identification.

Primarily, it’s fear of being made fun of for being a nerd. That old chestnut is the hallmark of decades-past teen dramas, where what was popular was not, could not be nerdy. Now, as Ben points out in Parks and Rec, since nerd culture is now pop culture, people making fun of it are now in the ‘out group.’ The point is salient, but not well-received by Tom, and washed over quickly in the episode. Still, it makes the fear rise in my throat, that I come off as a pedant or worse when I’m talking fandom, Star Wars, Game of Thrones, etc. The way Big Bang Theory paints nerds with a bad brush, I had the same fear of Ben’s character as a nerd archetype.

Let’s be clear, though. Parks and Rec is not a show about nerddom or explaining what’s cool and what isn’t. They don’t have a responsibility to my childhood, to pop culture or really to anything other than getting a good laugh. Ben’s nerdy side is just one part of him, a more complex character than most on the show, and it’s not a detraction by any means. It almost makes me cry when I think about the fact that, despite the wide range of differences between the characters, they still hang out together, they find value in each other’s company, they find love between themselves. It’s beautiful, a snapshot not only of what makes the show great, but of what makes the real world great, too.