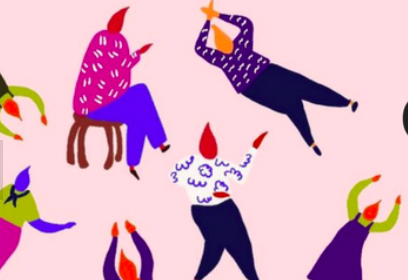 An Evening of Combustion

Bad Dog Theatre Company’s annual Combustion Festival runs through June 9th at their theatre on Bloor St. West. It’s a week of performances, workshops, drop-in classes and general partying that fosters a spirit of collaboration, community, and plain old celebration of good times and letting them roll and all that.

I ventured into the merriment to catch a Combustion show on Tuesday night. Technically one show, the 75 minute affair was really more of a double bill (with yet another show available for just a $5 ticket upgrade if I hadn’t been awake for so many hours in a row already; long story short, Bad Dog continues to be the most affordable fun in town).

First up was a trio of improv vets who had met for the first time 10 minutes earlier: out-of-towner Andrew Phung, and two Torontonians Jan Caruana & Rob Baker. Caruana is always a favourite of mine and her calm, decisive, sincere style held down the fort nicely without pre-existing chemistry or mutual experience to lean on. A vague audience suggestion set this trio’s story at a groupon trip to a javelin range (javelin field? Place where one throws javelins under moderate-to-lax supervision). The story quickly became about short shorts and erectile dysfunction, as far too many improv shows somehow do, but the give and take between total strangers on stage was impressive regardless of the dully risqué subject matter.

Next up was a team of eight, another mix of hometown improvisers and guest stars, performing director Sean Tabares’ original format “Dossier Project”. Two at a time, the performers took the stage and played a scene at an audience-suggested location. In a sealed envelope downstage was an innocuous phrase. The improvisers had to maneuver the scene to allow each of them to look inside the envelope at some point, which would then set off a sort of race to utter the enclosed phrase. Whoever got the words out first delivered the “kill shot” assassinating the other performer. After four rounds, the four improvisers still standing faced off in a supersized round. A clever format with a lot of promise, in practice the result was usually pretty slow, scenes feeling long and imbalanced with the performers’ minds focused on the goal rather than the story. Bad Dog all-star Liz Johnston broke up the pattern by choosing to lob her kill shot phrase like a grenade rather than drop it in subtly. All the other improvisers who stole their respective scenes ended up murdered, leaving Johnston to completely carry the final four-person scene set at a marina. The most interesting of the murdered four was by far Adam Cawley who took the location prompt of “a wooded area” and just leaned into its weirdness, fleshing out a character in seconds and delivering the most laughs-per-minute of the night by far.

Combustion’s fun mix of guests and mainstays leads to unexpected and refreshing combinations of improvisers you don’t otherwise get to see. It’s not going to give you the most polished improv ever at Bad Dog but it might just be the most fun.