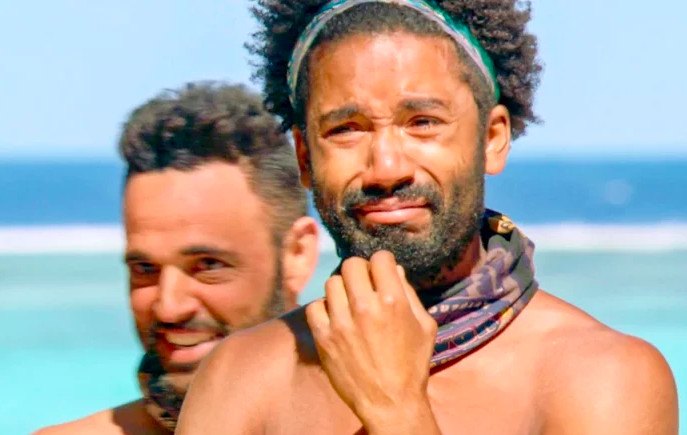 This week on Survivor: Disappointment Island, we get a cruel teaser of what could be if Laurel and Donathan weren’t such party poopers and made a move with the Naviti women against the immovable object that is the Domenick and Wendell duo. Of course, a women + Donathan alliance to shake up the game and disrupt this slow march toward Domenick’s eventual victory would be far too exciting to be true, so I felt assured from the beginning that this would not happen. Those low expectations combined with the fact that at the top of the episode, Kellyn comes clean about her double vote for Laurel, stoking Laurel’s existing distrust for her. Laurel, fortunately, is the frustratingly rare player who understands that trust is not required in order to vote with someone if the plan is mutually beneficial. It’s true that in voting for Wendell she is going against people she trusts for people she doesn’t, but in this case, her and Kellyn’s goals of decentralizing the power in the game by getting rid of a player flushed with allies, advantages, and a winning resume. Alas, despite her rational consideration of putting aside her differences with Kellyn, it will not work out this time.

They play a reward for a barbecue and a loved ones visit, which always destroys me emotionally but this one gets me in particular because there are so many siblings, and as someone who would bring my older brother this hits me hard. Kellyn talks about how she and her brother are opposites but have always bonded over Survivor, and any reminder of Survivor being a glue for an otherwise somewhat disjointed family has me sobbing. Chelsea and Sebastian both have cute little sisters with shiny hair, and Angela’s daughter seems to get even Jeff emotional as he asks Angela about sacrificing time with her family to serve her country. Wendell’s dad Wendell is here, and I’m very relieved it’s not his girlfriend so we don’t have to watch Wendell force the tribe to sing to her. Donathan’s aunt gives and update on his family, who are all doing fine, though it would have been the gag of the season for Aunt Patty to pull a Johnny fairplay and pretend they aren’t. Finally, Domenick’s wife, the most Italian-American woman I have ever seen, breaks down about how hard life is without Dom, and I say: Give the woman what she wants! Send Dom home with her! Can’t you see how much she’s suffering?!

Instead of that, Domenick gets picked for the reward by Sebastian, who literally just picks every man and leaves all four women behind at camp. I’m not normally one to automatically assume that an all -girls alliance is imminent just because the women have time together, but in this case the two power players are both male, and three of the women in Chelsea, Angela, and Kellyn are already aligned, and all they need to do is pull over Laurel and Donathan, the original Malolos, which shouldn’t be too difficult of a task. Along with the incentive of targeting a threat anyway, Wendell has just pissed off everyone not picked for the reward by giving up time with his dad for an automatic advantage at Ghost Island, which Sebastian passed on, offering it to anyone who wanted it of the men. Thank God Wendell took it, because it’s always good to look like a heartless power-hungry player, especially when you’re the second biggest threat in the game and the advantage winds up being the lamest possible advantage. It’s the second chance in the immunity challenge advantage that Malcolm got at the final four of Philippines, which will only ever be helpful in exactly one scenario; if you’re in the final two of the challenge and drop out and one more try will potentially clinch it for you over the other person. Otherwise, if you are not great at this challenge to begin with, a second chance will not be helpful, since it’s not like there’s much of a learning curve to this challenge. You’re either good at it or you aren’t. The advantage of course is wasted and Wendell drops out of the challenge, leaving Domenick to win again. Shocking!

Wendell and Dom choose to target Chelsea because she’s the biggest immunity threat. Donathan seems on board with voting against Wendell despite knowing he has an idol, because he knows that they have no shot against either of them in the end, and they have to assume a final three, which means at least one of the two of Wendell or Dom will be there in the end if Donathan and Laurel stick with their final four in the end. I understand Laurel’s hesitancy and eventual refusal to vote against Wendell because I’m sure from her perspective she sees that she and Donathan will be flipping to an alliance where they are numbers 4 and 5 underneath Angela, Chelsea, and Kellyn. However, 3 out of those 5 have to make it to the final 3, and between now and then a lot can happen with immunities, the final four fire-making, and the fact that Domenick and his idol, as well as Sebastian and his vote, have to go somewhere. Flipping on Wendell wouldn’t automatically make Dom, who will be completely alone, turn against Laurel if she explains that it’s what she had to do and attempts to maintain a relationship with him. In the scenario in which Laurel and Donathan flip, it is indeed less likely that they both get to the final four, yet it’s still possible that it happens, and if it does, one of the two of them is very likely to win as long as Domenick doesn’t immunity run his way there. In the scenario where they don’t flip, they are very likely to get to the final four, but they are playing an automatically losing game. All of the risks, all of the mistrust, all of the variables that surround them flipping are scary but absolutely worth it, because there is absolutely no point in playing a final 4 game that will result in an automatic loss. They can do mental gymnastics all they want to justify playing scared, but the reality is that even if Wendell had pulled his idol, his and Dom’s votes were not going to Laurel and Donathan, and their decision not to flip while they still have the chance (because with both of these guys having idols it very soon might be too late), seals their fate as losing finalists according to their plan. Their only hope now is that they can flush one or both of the idols next week and then at final 6 get Sebastian to vote with them to get out either Wendell or Dom, whoever is idol-less.

At tribal, Donathan seems to signal to Wendell to play his idol, though I imagine this was a trick of the editing. Those tribals are long, and the editors will do anything to make this charade seem exciting (except, you know, let anyone except its main characters talk). After being done horribly dirty by the edit, Chelsea is bounced out here and the invisible people are whittled down to two in Sebastian and Angela. I imagine you can pencil one of the two, probably Sebastian, in for third place through some more stumbling through his game and everyone knowing that they will 100% beat him. When it comes down to it, I wouldn’t put it past Domenick and Wendell to cut Laurel or Donathan in favor of Sebastian at the final 5, if they do in fact all make it there together. Or maybe the face crack of the century will occur, and at final 5 Donathan and Laurel manage to get Sebastian to vote with them against Domenick. That’s the future I want, and the future I choose to believe in to keep me going through this slog of a season.