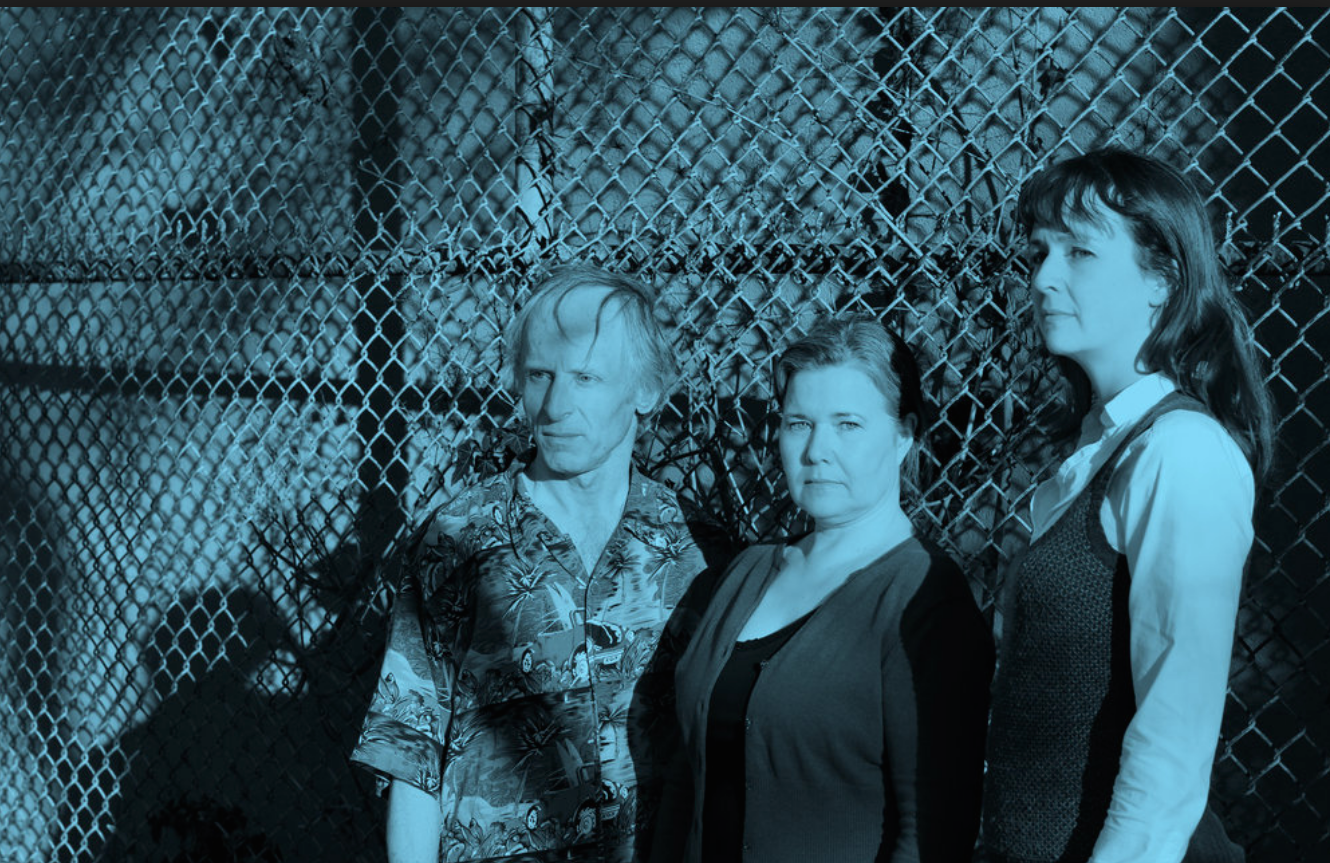 Trauma reverberates through a life in ways that are almost always unquantifiable, and it is a state that lends Bryony Lavery the title of her 1998 play, produced by Seven Siblings Theatre and onstage at the b current studio theatre in Artscape Wychwood Barns. All three characters are caught in an emotional paralysis, frozen as it were, having suffered a loss or abuse that now frames their lives. Nancy (Nancy McAlear) is a cheery, dependable woman, a mother of two whose youngest daughter, Rhona, has gone missing. Ralph (Scott McCulloch) is an energetic and angular man who we quickly realize is a serial killer, and who very likely has something to do with Rhona’s disappearance. And Agnetha (Madryn McCabe) is a grieving psychiatrist from New York who has come to the England (where the play is set) to present a thesis on whether serial killers can be re-understood by society on the basis of the abuses they may have suffered as children. She ends up using the recently captured Ralph as a case study for her presentation. Lavery’s empathetic, frequently staged work investigates whether or not forgiveness for the perpetrators of such trauma is possible, or even advisable. What the play makes clear is that it is trauma that has brought these three people together, and though they all play some role in having afflicted or been afflicted by the other two, their mutual recognition of their pain will play a role in their healing.

Will King’s staging is straightforward, placing the emphasis almost entirely on the performers, all three of whom do a nice job of maintaining the tough emotional focus of the play. For the first section of the play they alternate inhabiting the space on their own, delivering monologues or lines to off-stage characters, emphasizing their psychological solitude. Gradually, they come together. Each performer has moments of real power, and despite finding the production overlong and the text somewhat repetitive, I was moved by each of their final onstage moments. However, I found that they didn’t seem to get to the root of their characters, presenting convincing outlines of these people but missing a fuller complexity in their performances.

Perhaps the most effective work is done by McCulloch, as Ralph is the most explicitly repressed and emotionally trapped personality, and so a slightly more surface-y presentation makes the most sense. And indeed a case could be made for the emotional hesitancy of all three characters extending to their onstage energy, so that each performance is determinedly keeping certain layers off-limits to the audience. This doesn’t quite work in the execution however, as it feels more like the characters themselves are being kept at bay. McAlear and McCulloch’s accents are also both a little, shall we say, regionally unsure. But they do a good job of adopting the rhythms of their character’s particularly English way of speaking, with McAlear especially bringing an enjoyable Talking Heads-like energy to Nancy’s determinedly cheery approach to the world. And while I still felt we were missing a layer to her character, she is undeniably affecting in her attempts to move through her sadness and deal with the world as it comes. McCulloch meanwhile brings a visceral physicality to the role that works well for the character’s disarming straightforwardness. McCabe meanwhile does particularly well with the reams of academic text she has to deliver, and is also very moving in a key telephone scene.

The main props used are a series of white boxes which are arranged and re-arranged by cast members between scenes to adopt different furnishings. King provides an ambient score that hovers effectively over the proceedings, and Chin Palipane provides unobtrusive but fluid lighting work. While Lavery’s text is as mentioned overlong and repetitive (particularly in the play’s middle section), there’s something to be said for giving these characters the time to explain themselves to the audience and to each other, and for the full weight of traumatic experiences to be understood and hopefully be moved beyond, and the mis-en-scene established by the production team does a nice job of setting that contemplative, almost non-confrontational tone. Indeed, when moments of expected confrontation occur, the wounded parties attempt kindness rather than rage, and though it feels like it took too long for us to get to these scenes, there’s a certain lovely surprise in spending so much time expecting one thing and then realizing that, of course, it’s going to be the opposite. While the production and performances don’t always reach that level of profundity, they still do a good job of presenting the painful and moving themes of Lavery’s play.