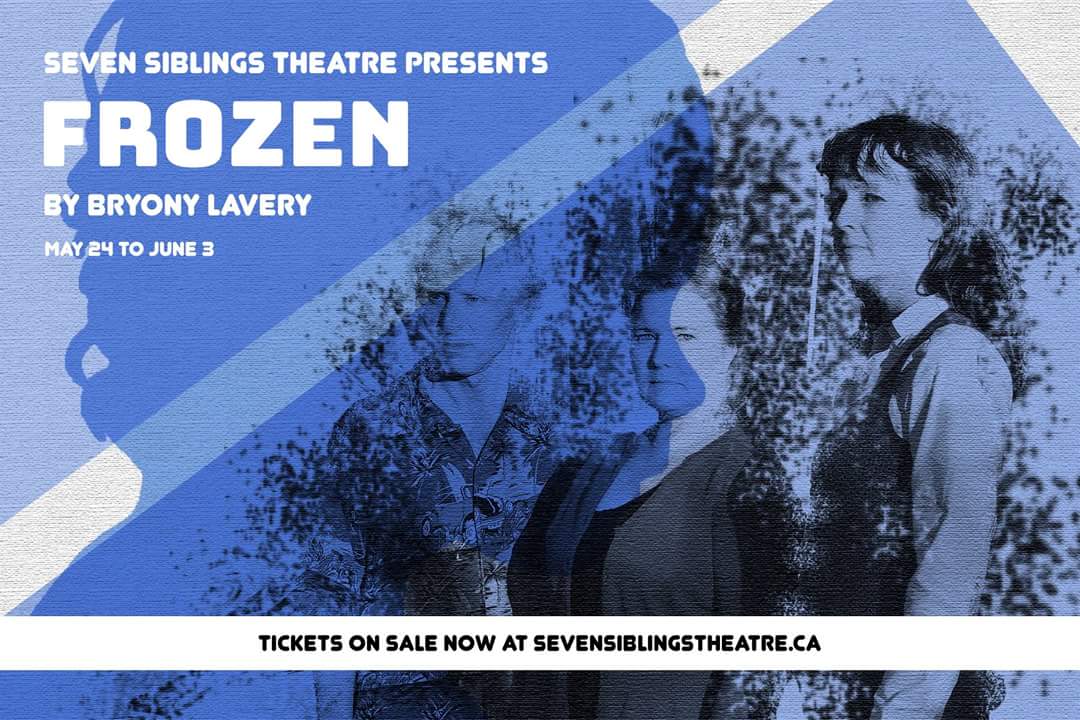 Seven Siblings Theatre is coming off their strongest season yet with a staged reading, a festival of new work, and two mainstage productions including the Critics’ Pick Award-nominated Fringe run of Eliza Clark’s Recall.

They’re kicking off their 2018 season with Bryony Lavery’s Frozen, an emotionally potent drama about tragedy and trauma. Before tonight’s preview, we caught up with producer/performer Madryn McCabe to find out more about the production and the company’s unique approach to demanding work.

What is Frozen about and what attracted you to Bryony Lavery’s script?
Frozen is about a girl gone missing, her mother, Nancy, who retreats into a state of frozen hope, Agnetha, an American academic, who comes to England to research a thesis: “Serial Killing—A Forgivable Act?” and Ralph, a loner who’s looking for some distraction.

The script is written is a way I’ve never experienced before. About half the play is direct address monologues, in these long, sweeping paragraphs. She has a very specific way of writing dialogue. It’s almost poetic. Bryony Lavery creates a very specific world with her words, so we’ve stripped down many of the production elements. The set is small and simple, and we’ve minimized the props and costumes as much as possible.

Personally, I was attracted to the challenge of playing Agnetha. She has quite a complicated arc, and it’s definitely been the most challenging role I’ve taken on so far. Each one of the characters lives frozen in their trauma at one point or another, and it’s so interesting to see when they decide to stay there or to move through it.

Seven Siblings uses the Michael Chekhov technique. How does that come into play in this production?
We essentially did the table work of the play on our feet. Using exercises in atmosphere, character centres, and archetypes, we explored the different themes of the play, and really built the world. Together, we made discoveries about our characters’ inner lives and how that’s motivating what happens in the play. Many of the scenes in the play are just one character speaking to the audience, so being able to work with the entire ensemble in Chekhov exercises kept us from rehearsing in isolation. The result is that we have a really solid atmosphere and group dynamic.

Tell us about the cast and creative team involved.
Aside from me, playing Agnetha, we have Nancy McAlear as Nancy. Nancy has spent much of her career in Edmonton, so Toronto audiences may not be very familiar with her, but should be. She’s absolutely brilliant. She really forces me to rise to her level in the scenes we share.

Scott McCulloch is playing Ralph. This is Scott’s third show with Seven Siblings, and is very active in the Toronto indie theatre scene. His work as Ralph is quite different from any of the other roles I’ve seen him in. He has such a huge shift from the beginning of the play to the end, it’s very moving to watch.

Will King, my partner at Seven Siblings, is directing again but has also designed the sound for the show. Since we have very little set, the sound has added a lot of depth to the world. And he plays some of it live, so it feels very present.

Chin Palipane is our stage manager and lighting designer. Like the sound, the lighting design has added a fantastic layer to the atmosphere of the play. The colours are quite saturated, which gives everything an eerie level of “otherness”.

Margaret Hild is our voice and dialect coach. She’s been so helpful to Scott and Nancy in shaping the specifics of their regional speech. The play takes place in England, but not a high RP accent like we all learned in school, so Scott and Nancy actually sound like the people you’d meet in central England. Where she has helped me the most is as a voice and breath support coach. Right off the top of the show, I have a huge physical and vocal 0-60 in terms of emotion, and Margaret has been such a gentle guide in giving me support exercises for my voice, my body and how to let myself go to the emotional state I need to without going crazy over it. She runs a weekly workshop and I’d highly recommend it for any performer. Her page can be found here: Margaret Hild Coaching

Liz Whitbread is our associate producer. It’s been a huge load off of my mind to be able to hand off the media and promotional responsibilities to her that I usually take care of as producer so that I can focus on being an actor.

Why is this a can’t-miss production?
Although the subject matter can be difficult (serial killers), there’s a real depth of humanity in the show. What does it mean to seek justice? Revenge? Who deserves forgiveness? Can we forgive every act, or are some things just impossible to move beyond? What happens when the line between impartial study and personal immersion blur? It’s a very emotional show, and (hopefully!) a big cathartic release at the end.

Where/when is the show happening and how can we get tickets?
We’re performing at the B Current Studio space at Wychwood Barns at 601 Christie St. Go to the doors at Christie street, and our generous volunteer will let you into the building (we’re still looking for people to work the door. If you’re interested, sign up here. You can see the show for free the night you volunteer for us!)

You can find ticket sales and all additional info here: Frozen Tickets