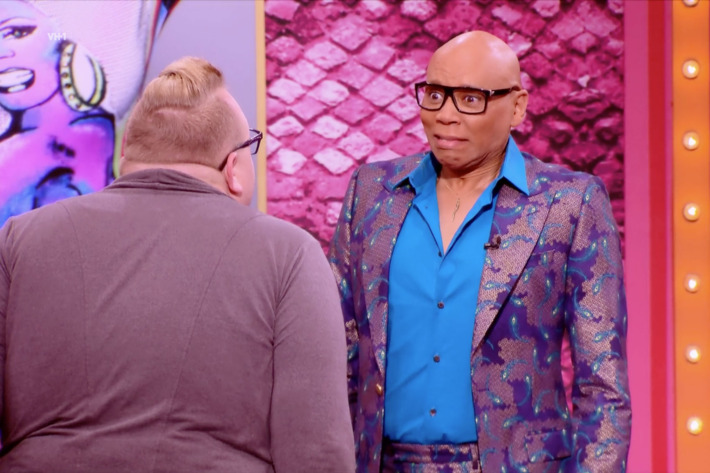 Well, I can’t say I’m surprised. Between Ru’s apparent standoffishness while talking to her in the work room, the judges lack of reception to her performance, and the edit of the last couple of weeks, it was obvious that The Vixen was dead on arrival in this episode, and that Ru had made her decision before it even began. The foregone conclusion of The Vixen’s elimination does leave room to explore potential cracks in some of our frontrunners, namely Aquaria and Eureka, however the show still refuses to cast Eureka in a fair (see: negative) light. Even when the episode begins they allow Eureka to lie through her teeth, somehow acting surprised about The Vixen’s animosity toward her, clutching her pearls and explaining, unchallenged, that she simply doesn’t know where it comes from. Of course she doesn’t see where it comes from, that’s the point. No on is accusing Eureka of overt racism, yet her ignorance of the situation and continual ability to make everything about her, to elevate her own victimhood over that of The Vixen’s, is astounding, and unbelievably frustrating even as a viewer, so I can’t imagine how it must make The Vixen feel.

This conversation is explored further in a truly revolutionary conversation between Asia O’Hara and The Vixen. Asia pulls Vixen aside to get to the root of her issues with Eureka. The Vixen comes from America’s most segregated city, and Chicago’s Southside is loaded with white people’s projections of black poverty. It’s a “bad neighborhood,” it’s “dangerous.” When a person grows up with all of these images associated with your surroundings, it’s understandable that they would internalize those perceptions, and assume that white people think that they apply to you, too. Combine that innate (and often necessary) defensiveness with being gay, and a drag queen, in a place where white people often blame black queens for “ruining pride,” and reject them from the mainstream gay movements, and The Vixen’s behavior is thrown into sharp relief. Asia alone seems to understand this, and though she rightfully acknowledges some of the missteps The Vixen has made, she is the only one able to communicate that to her from a place of genuine empathy and understanding, without the performative victimhood and outright condescension that someone like Eureka, who ostensibly is trying to help, but really is just trying to relieve herself of her own guilt, can’t muster. Asia fairly points out to the Vixen that perhaps Eureka is simply a representation of the types of community members that have made The Vixen’s career, and life, so difficult. This is probably partly true, but I would challenge Eureka to interrogate why she is the type of white queen in whom a black queen can see violence and intolerance within, and attempt to learn so that she can change those behaviors.

On a less serious note, or more serious if you’re Asia O’Hara and have grounds for a lawsuit, the mini challenge is hilarious this week. This was an all-time great that had me laughing out loud. The queens must each say something to Ru to make her slap them, resulting in a dramatic fake slapping montage. These reads are far better than the ones from the actual reading challenge, with the best being the simple punch from Asia, “Ru, you hit like a girl, it’s too bad you don’t look like one,” resulting in Ru accidentally actually slapping her, prompting a hilarious sequence from Asia in which she tells Ru to look around because this is about to be Asia O’Hara’s Drag Race.

For the maxi challenge, which is obviously introduced in part by the Chad Michaels, the queens will be singing live, each representing a different era of Cher, assigned by Ru, in Cher: The Unauthorized Rusical. In the work room, the queens reflect on their various singing backgrounds, which in most cases is approximately none, except for Monet who studied opera in undergrad because of course she did. She explains to Ru, however, that that kind of singing won’t translate to a Cher impression, to which Ru astutely points out that queens love to compartmentalize their talents. This is a good observation because it does seem that the queens seem to use that as an excuse for not performing well in certain challenges. “I’m not a comedy queen,” is a fine thing to know about yourself, but when some of these queens are out hosting shows every weekend, which distinctly requires comedy, it’s not exactly accurate, but as long as they can tell themselves that that kind of skill doesn’t translate to exactly what they’re supposed to be dong, they can excuse themselves for slouching in certain challenges.

Ru guides Cracker away from doing jokes about Cher’s age in her 90s revival, which is a good lesson for all future queens: Don’t make fun of Ru’s idols, especially if you’ve been clocked in the past for your shade coming off as too mean to be funny. In the most heavy-handed foreshadowing of the season, Kameron says that she needs to be “a little less silent and a little more deadly,” and of course she ends up coming away from this challenge with her first win of the season. At the opposite end of the spectrum from Kameron’s annoyingly humble persona, Aquaria’s confidence will start to ruffle feathers amongst the other queens. She fully sucks at singing but still feels like she’s got this in the bag, which I guess is what happens when you weigh 95 pounds and everyone tells you you’re perfect when you just walk onto the runway naked.

Continuing the flow of people who annoy me, former terrible drag race judge and single black friend of Taylor Swift Todrick Hall is here to choreograph this Ru-sical and tell all of the queens they suck. Everyone fumbles through their segments and his criticisms until Eureka, who feels that she should be excused from the assignment of having to sing and dance at the same time because she has a specific trauma surrounding singing live, which feels like maybe she should have addressed before coming on a show where there was an extremely high likelihood of that happening. As usual, she comes across as difficult and entitled, then expects us to applaud her for simply getting through the task. For once, it’s a shame that Todrick isn’t on the judging panel to air out this incident the way that he did when Trixie Mattel came off as difficult (to a much lesser degree) when working with Todrick in an All Stars 3 singing challenge.

While painting, Cracker discusses her background and her childhood, about how she had no access to pop culture, including toys that weren’t handmade by herself or her family. She recounts details of the kind of extreme poverty she faced, which sounds unbelievably traumatic, yet we don’t spend as much time with it as we did with Eureka’s, which frustrates me, but at some point I know I am going to need to accept the show shoving Eureka down my throat. Maybe next week.

The Ru-sical overall falls kind of flat. It’s very difficult to distinguish between the quality of each performance, as everyone pretty much seemed the same to me and all of the judges critiques came down to nitpicks, though they’d never admit it. I was much more interested in what guest judges and loves of my life Billy Eichner and Andrew Rannells were up to over on the panel than any of this. That said, I did think Monet and Cracker were the best, but for some reason the judges are going to give the win to Kameron because sure they are, why would they start making rational decisions now? Their critique of Cracker, who had objectively the best Cher impression, includes that she was “too over the top” which is an absolutely ridiculous thing to say about a group of drag queens putting on a musical about Cher. Aquaria certainly wasn’t better than Asia, but it’s become clear where Ru’s loyalties lie. For Christ’s sake, he literally whooped when Eureka just walked onto the stage. There was no way he was going to put Aquaria, coming off of a Snatch Game win, in danger when this challenge made it so easy for him to just pick his favorites.

The category is Glitterrific, which Cracker and Asia slay above everyone else. Kameron and Monet look acceptable in their jumpsuits, Aquaria predicted this year’s Met Gala theme with her Catholic-inspired realness, The Vixen looks beautiful and did the theme the most justice, and Eureka is also there. At least they finally criticize her for her lack of energy in her performance! For the second week in a row, two black queens, this week in Asia and The Vixen, are going to lip sync against one another, and this was over before it started. Even though The Vixen does out lip-sync Asia, it’s close enough that Ru can justify sending Vixen home, which she has wanted to do all along. That said, this is one of the best lip syncs in a very long time, and I’m happy to see Vixen go out on such a high note. She is truly something special, and though this wasn’t the competition for her, I hope it helps her gain even more of a platform in Chicago and around the world, because the world desperately needs leaders like her.