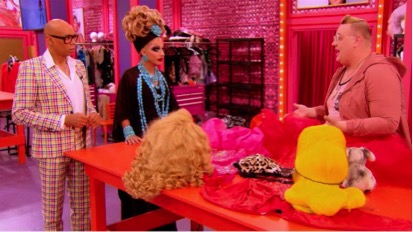 In typical season 10 fashion, this episode kicks off with Eureka whitesplaining The Vixen’s behavior to her, telling her how to be a role model. This is really rich because while The Vixen is actually out there in her career uplifting local black queens in order to promote explicitly black representation in the drag community within a deeply segregated city, Eureka… makes the same fat joke over and over again? Eureka condescendingly explains to The Vixen that she can be a role model “without using the bite from the bear,” which is weird because I don’t remember anyone asking. What Eureka fails to understand is that The Vixen’s outspokenness, her willingness to be unapologetic in her blackness, in her opinions, in herself, is part of what makes her a role model. It doesn’t mean she’s always right or that it’s always wisely-directed, but essentially telling her to “tone it down” is not the answer.

In the reading challenge, it’s clear where the show stands about how we’re supposed to feel about The Vixen. They show more reads for her than anyone else, including Aquaria calling her “The Villain,” and the angel herself Eureka wins the day. On the heels of this most classic of mini challenges, we are returning once again to the Snatch Game, a time-honored tradition of triumph and disaster, which sets the top queens apart from the queens who can’t do good improv-based impressions of a celebrity, which in this microcosm somehow relates to being a good drag queen. I kid, the Snatch Game is incredible, but it does showcase how little Drag Race has to do with being an actual working drag queen.

Bianca del Rio is here to give the queens some guidance, and boy do they need it. The Vixen feels certain about her Blue Ivy choice, and she certainly does have the look down. This is one of those characters that could go either way, be great or be a disaster, since Blue Ivy is a character that The Vixen will have to completely construct and go all in with. Since The Vixen is not laser-focused on her character work, it ends up falling flat. The way to make this work would have been to do something like Alyssa Edwards’ Joan Crawford, and go in a completely insane direction not grounded in who that character actually is, but is so zany and streamlined in its exaggeration that it works anyway.

Eureka is torn between doing Honey Boo Boo or Divine, but with the mermaid runway theme she ultimately ends up getting to do both by channeling Honey Boo Boo in the Snatch Game and Ursula (a Disney character based on Divine) on the runway. Monique is torn between Cookie Lyon and Maxine Waters, though unfortunately she doesn’t seem to have enough information about Maxine to answer questions on the spot. Alas, not doing her homework will be a trend for Monique this episode. Asia originally was going to do Whitney Houston, but Ru says she is not allowed to rely on cocaine jokes, which apparently are so essential to Asia’s impersonation that she can no longer even do Whitney Houston. Reflecting her community-based approach to drag, she settles on Beyonce, the most cursed of Snatch Game characters, so that she can The Vixen can play off of one another. Cracker is doing Dorothy Parker, and Ru correctly identifies that I do not know who that is, the same of which can be said of Kameron’s Chyna, who is apparently a wrestler. Kameron got very lucky that there were some dumpster fires around her, because in typical Kameron fashion, she was completely invisible in this challenge. Finally, Monet is doing Maya Angelou, which, unbeknownst to her, is the second Snatch Game in a row we’ve seen this impression. Thankfully, she does the poet much more justice than Chi Chi did, and Monet is officially fully rebounded after a couple of rough weeks earlier on.

Aquaria’s look is absolutely on point, though she has the exact reverse affectation of Miss Fame’s Donatella Versace, who sounded more Russian than Italian, when Aquaria sounds much more Italian than Russian. Apparently the judges don’t care about this, because Aquaria will win this challenge. I am glad that we have a reprieve from the inexplicable dominance of Eureka, especially because she did the same joke over and over again, somehow without getting read for it, and Aquaria had a few solid gags, but overall this was one of the least funny and competitive snatch games we’ve ever seen. Unfortunately, the “interaction” between Asia and The Vixen winds up being Asia just completely stepping on The Vixen, and The Vixen not having the confidence to combat it or come up with any of her own jokes.

The mirror talk this week is potentially the most important we’ve ever seen on Drag Race. Having this many black queens in the competition continues to be a replenishing blessing, as the queens engage with one another about creating political drag, their roles and responsibilities as dictators of social change, and their abilities and limitations to participate in those roles. Monique discusses that in contrast to The Vixen and Monet, who have the freedom to do political shows in their respective cities of Chicago and New York, certainly still with challenges and pushback, but with less of a threat to their safety and livelihood, she cannot do such things in her home city of Kansas City without being subject to financial loss or even the spectre of bodily harm. This conversation matters deeply because it reminds us as white people that we have a responsibility to use the freedoms we are granted by society to advance and uplift black artists who may not have the same opportunities we do. It also reminds us that placing an onus on black people to constantly be political and be the saviors of progressive society (re: black women saving us from the election of Roy Moore, the notion that Kanye “just needs a hug from a black woman,” etc), is misguided, irresponsible, and lazy. It ignores the realities of the situations surrounding black performers, and takes for granted that it is their responsibility to educate us about their struggles, when in reality we should be taking on the responsibility to educate ourselves. Monique and The Vixen also discuss their differing but both valid approaches to white guilt. Monique understandably wants to avoid it, since she doesn’t want to be responsible for the comfort of white people. The Vixen, however, uses it to her advantage and has no qualms profiting off of it. Good. There is nothing wrong with a black woman using her own disadvantages to her favor. White people have implemented or upheld the institutional barriers to her career, and she has every right to turn that around and use it to get that coin. If this makes any white people uncomfortable, they probably don’t understand what Black Girl Magic and what The Vixen’s drag is about anyway.

On the runway, the mermaid fantasy makes it hard to stand out, which is why the fact that Michelle didn’t like Asia’s instantly iconic fish mask is absolutely ridiculous. Cracker looks extremely pretty, Kameron looks like a mess but won’t be read for it because she’s safe, Aquaria’s oil spill motif is incredible, I love Monet’s witchy look despite it being a little unfocused, and unfortunately Monique and The Vixen’s somewhat thrown together looks will not be enough to save them for elimination. I would, however, like call complete BS on Michelle’s read of The Vixen’s look. She claims that because the bra is somewhat ill-fitting, Michelle can “see what The Vixen looks like out of drag.” This makes no damn sense. Aquaria never wears boobs and comes out practically stark naked every week and has never once received this “criticism.” Ru herself says that The Vixen’s face has never looked prettier. Michelle saying that she can see Vixen’s boy body is a completely baseless, nonsensical criticism that serves only to validate her already apparent distaste for The Vixen. I am not having it.

Before they go to the lip sync, there are asked which queen is the most deserving to go home. Everyone votes for The Vixen and The Vixen votes for Eureka, who is apparently allowed to defend herself without criticism but when The Vixen defends herself against her sisters telling her that she doesn’t deserve to continue to live her dream she is labeled as angry and unfair. I reiterate, I’m not saying that The Vixen can do no wrong and that her reaction was entirely fair. I am saying that the reaction was understandable, and we are all subject to an edit that is shoving Eureka down our throats while burying The Vixen. I am willing to cut The Vixen slack because I believe she is more talented and does more important work than any queen there. I am willing to cut her slack because Eureka has never, will never, endured the same types of structural barriers and challenges that The Vixen has faced in her career. The online reaction to The Vixen has primarily betrayed that when the fans complained that the last couple of seasons have not had enough “drama,” what they meant was that they wanted palatable drama, Aja calling Valentina Linda Evangelista, not a black girl talking about racism. That is too real, too uncomfortable. Much easier than acknowledging that perhaps The Vixen is sensitive to implicit bias that viewers, particularly white viewers, are not able to detect on the show, is to just say that The Vixen is overreacting, playing the victim, and to be threatened by her overtly political, intentionally pro-black art and viewpoint. I see you, and I am not impressed.

Also unimpressive, the Monique vs. Vixen lip sync. I don’t understand how you can be a gay person in America and not know the words to Cut to the Feeling by Carly Rae Jepsen. I am so sad to see Monique Heart go, but there was no excuse for this. Lock up her spot on All Stars 4 right away, and get her place in the drag race hall of fame ready, because this queen is an absolute star, and it’s a shame that we won’t get to see any more of her. Maybe a surprise Handmaid’s Tale twist will save us from barreling head first into a Eureka vs Aquaria finale, a supremely disappointing result from a very promising cast. For now, let’s just hope the Monet X Change upward trend continues, or that we get to see, well, anything from Miz Cracker in the coming weeks.