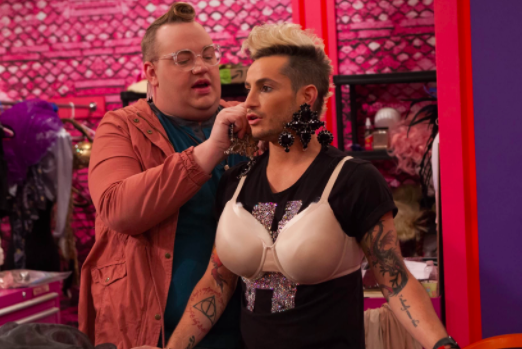 Ladies, I have good news and bad news. The good news is Miz Cracker finally got a win, and actually looked like she was having fun on the show for once! I am so happy for her! The bad news is that Ru has unfortunately lost her damn mind and sent home Monet X Change, who not only didn’t deserve to go home, but didn’t even deserve to be in the bottom three when Aquaria was right there looking like couture while leaving her partner looking like Kirkland’s Generic Brand Aquaria. Unfortunately, however, I must continue my painful journey of slowly boarding Team Aquaria in order to block Eureka from somehow taking this crown, and her comments at the beginning only sped the process. Unlike the other queens who are pretending to be thrilled for Kameron and Eureka for both surviving elimination through their ability to pull out an average lip sync, Aquaria is open that she’s annoyed that she’s not in the top 5, and accurately points out that anyone would have done the splits at the exact point in the song that these two hit them. Good! She should be annoyed! She knows that there’s only one double chantay per season max, and it was wasted on that mess. She apologizes the next day in the work room, probably as a response to Asia calling her out for being selfish, but she has nothing to apologize. At least someone is attempting to bring some drama in the gaping absence of The Vixen.

The mini challenge asks the queens to butch it up in a new ad for Trade Fragrance, and I’m pleased to say that the mini challenges this season continue to be some of the best of all time, and provide the most joy and entertainment of any part of the show most weeks. I instinctively want to be mad that Eureka wins this one too, but honestly I would have no idea how to judge this either, so sure, why not. As a reward, she gets to pair up the queen’s with social media stars for this season’s makeover challenge. For some godforsaken reason, she picks Frankie Grande for herself, which is a pairing hand-crafted by the devil himself. I will admit that I was not a person who was into YouTubers at all, so I’m not really sure who some of these people are. I know Frankie Grande from being Ariana Grande’s brother, and the anathema of the Big Brother community. I know Tyler Oakley from the Amazing Race and from constantly searching his name on Twitter because the two times I have tweeted about him, both negatively, he liked them within the day even though I didn’t tag him. Kingsley I know because he used to review Lady Gaga videos and I definitely remember a friend showing me one in ninth grade and finding it mildly amusing. I have never heard of Raymond Braun and still have no impression of him after this episode. The two straight dudes are completely interchangeable to me, though I’m told Chester See used to date Grace Helbig, who is a person I have heard of. The other one’s name is Anthony Padilla, and he and Kameron Michaels note that they have “similar personalities,” by which they mean “no personalities.”

While the queens are all trying to drag up their boys, Asia proves exactly why she is so wonderful in a moment when her partner Raymond spies a coat that she absolutely loves, and though it wasn’t in her plan to wear it, Asia magically whips up a second one so they can be matching. We love a kind queen! We learn that the queens and their partners must also “create” a video for one of Ru’s songs, which serves as simply a complete waste of time. Hooray for Ru’s rampant self-promotion?

On the runway, the queens flaunt their family resemblance, or, in some cases, lack thereof. This is not the case in the instance of Monet X Change and Short Change, AKA Tyler, who have as much family resemblance in makeup, hair, padding, and glasses, as they possibly could, yet the judges will still say they don’t see it. Eureka openly admitted that she paired up black and white people to add a challenge, which is extremely gross to begin with, but on top of that, it provides the judges with an excuse to just read whoever they want to go home. There is objectively more family resemblance than in the case of Aquaria and Kingsley (or Capriciacorn), and they looked way better, with the judges acknowledging that this is the best Monet has ever looked, while Aquaria simply looks acceptable, and left her partner looking mediocre. This was an absolutely nonsense decision to put Monet in the bottom, but it’s clear that Ru has decided who his horses are in this race, and I can only pray to God that one of them is still Asia going forward. Speaking of, she and America O’Hara look very Joseph in their technicolor dream coats, and I’m living for the energy and the sweetness. Eureka and Eufreaka are rocking an extremely safe black dress with the same hair she has every week. When Ross is critiquing these two, he will say that the “two bold flavors” of Frankie Grande and Eureka are like mixing wing sauce and ranch, which apparently is heaven. Calling ranch a “bold flavor” is the whitest thing I have ever heard, and I no longer need to hear Ross’s opinions on either condiments or queens. I almost forgot Kelly and Kameron Michaels were even in this episode because they were so boring and cheap-looking. Thankfully, the house of Miz, Cracker and Cookie that is, are here to grace us with Cracker’s long-overdue win, and the only truly iconic family resemblance of the episode. The pink lips! The walk! The absolute serving Cookie is giving us! I am so proud of Cracker here and am so thrilled to see what she can do when she’s getting out of her head and having fun with it.

The lip sync is great from both contenders, and it’s a shame that Aquaria’s statement, that there can only be one double chantay of the season, will come true here, and Monet will be sent home for some inexplicable reason that can only be explained by some sort of curse put on Ru the moment Shangela wasn’t picked for the top 2 of All Stars 3. Monet X Change is truly something special, and one of those select queens that walks of the stage and makes me immediately think, “I can’t wait to buy tickets to her show.” We will miss you Monet. At least the ghost of Vanjie came back this season after an upsetting week off. Until next week: Vaaaaaaanjie.