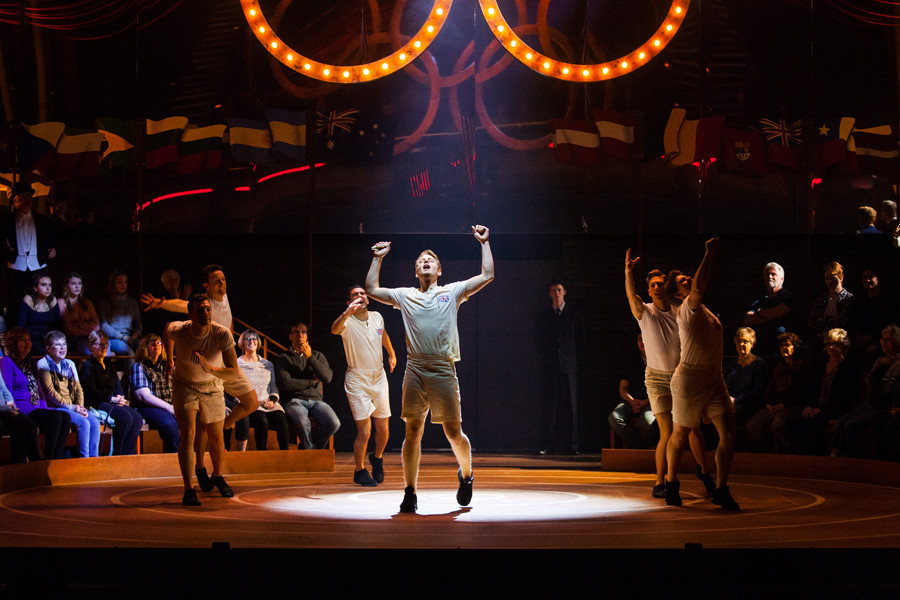 Out of Town Report: Chariots of Fire at London’s Grand Theatre

For about a year now, I’ve been receiving press releases from the Grand Theatre in London, Ontario. I don’t live in London or even have much excuse to go there, but I read each one with increasing interest. With the North American premiere of Chariots of Fire (UK playwright Mike Bartlett’s adaptation of the iconic film), Artistic Director Dennis Garnhum closed out his first full season running a national-calibre theatre in an overlooked piece of the province. That’s really important.

I grew up near London, in a town where the high school musical was the cultural centrepiece of the year. I was a lucky kid- my parents took me to Toronto for the occasional Mirvish/Livent show and my grade 7 class saw Twelfth Night at Stratford- but the fact remains that theatre wasn’t a luxury most of us had access to. At least not good theatre.

And what the Grand is doing right now is good theatre.

Chariots of Fire is a weird play, an unnecessary adaptation of a dated movie. It’s packed with tricky accents (almost none of which are mastered by this cast) and action that’s impossible to stage, to say nothing of problematic cultural themes and a near total lack of substantial female characters. But it’s good theatre. Ambitious theatre. As a director, Garnhum attacks the play with the attitude that anything is possible, staging the races with cleverness and style (never the same way twice) and bringing the track out into the audience to not just make us feel like part of the action but to literally give the actors more space to run, which gives the races stakes and realism that makes a big difference. The actors are all honest-to-god athletic, giving the racers a frenetic jockish energy that can’t be faked. Both leading men- Harry Judge and Wade Bogert-O’Brien– deliver top-notch emotional performances rooted in two very different hero’s journeys, though Bogert-O’Brien has to deal with an intense religion-driven arc that is really hard to sell to a 2018 audience.

The play isn’t perfect- nor is the production- but its professionalism and ambition mark the Grand Theatre as a real contender in the Canadian theatrical scene in a way no other Ontario non-festival theatre outside of Toronto is. The people of London and the surrounding area should get to see actors like Judge and Bogert-O’Brien on their local stages. Toronto has so much theatre, we need more people like Dennis Garnhum who want to build outward and bring what we have to people who have less of it. Chariots of Fire is just fine but The Grand is pretty grand.