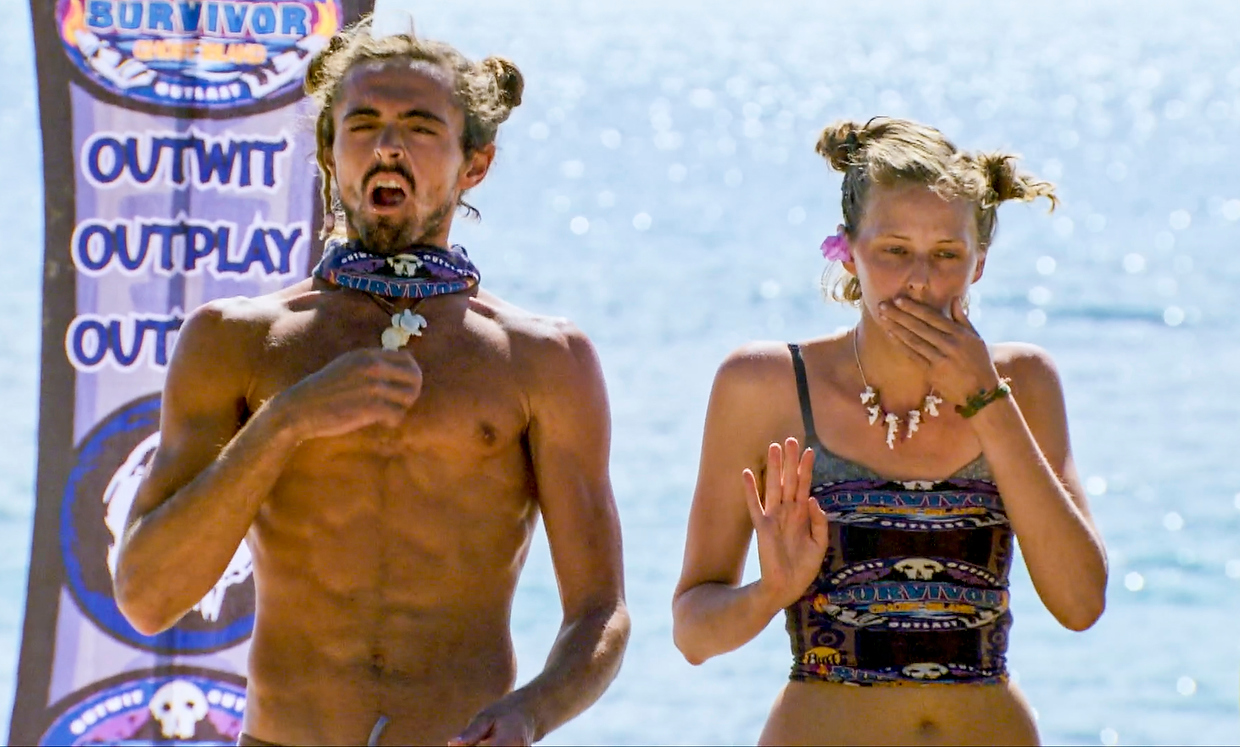 I know I’ve been a little low on the editing of these last couple episodes, but I can’t downplay that it’s a sad day when amidst all the scrambling, all of the competing plans and alliances and advantages, it’s so painfully obvious who is going hope throughout the duration of the episode. The show can tell us that Donathan and Laurel are waffling, give us optimistic glimpses of their potential willingness to turn on their final four deal with Domenick and Wendell. They can tell us that Angela is going hard in the paint and has her crosshairs on Michael, and somehow will execute this without Michael playing his idol and saving himself. Yet through it all, they’ve been setting up for weeks Libby’s exit here, and completely give it away the second they start the recap of last week’s episode, when they go incredibly far out of their way to mention that Chris went home, but remember: Libby was still a target! We even start the episode with Libby talking to the camera about how she’s been getting all these votes and doesn’t know why. Libby has given us little to nothing gameplay or personality-wise, so the show has to make sure we don’t forget who she is for her elimination episode by constantly reminding us that she has received votes.

Meanwhile, the people who actually get screen time get their mandatory confessionals so we can see what’s going on in their heads. What does Chelsea think about all this? Who cares! Sebastian? Who’s that? But God forbid we miss out on Domenick getting an entire confessional simply to tell us that he’s planning on not doing anything this episode. I’m so glad I have that information! In a more relevant story, Wendell is feeling insecure about his relationship with Laurel, so he tries to lock her down 100% for their final four deal. To do this, employs the worst possible strategic tool that apparently every player thinks is a good idea, which is to give an ally that you feel shaky with vital game information that they can easily use against you in an effort to build trust and make them feel closer to you. If you feel a strained relationship with someone, don’t give them more information to see you as a bigger threat and more effectively target you! Stop that! Naturally, this makes Laurel wary of how much power Dom and Wendell collectively have, and whether or not they’re beatable at the end and therefore worth sticking with.

The reward challenge is played in teams of 6 for the best possible reward: Margaritas. It also comes with Mexican food but who cares about that. Wendell and Laurel are both extremely talented slingshot artists and win the reward for themselves, Donathan, Chelsea, Angela, and Libby, forcing the other team to choose rocks for Ghost Island. It ends up being Jenna, who is a person who exists on this season, and she doesn’t get to play for an advantage because her entire game is a sad trombone noise. On the reward, Angela tips off Libby that she has been targeted historically because of her closeness with Michael, who she now feels like she must cut off. Back at camp, Michael shares Laurel’s anxieties about Dom and Wendell, and tries to get Angela on board with the idea of targeting the power players. In this episode, the role of Angela was played by an outspoken, hard-gaming, bug-devouring awesome maniac, and I give credit to whatever producer decided to recast the role because New Angela is great. She’s all over the place, running to Kellyn and Chelsea about Michael’s treason, then ultimately to Dom and wendell, leaving them no choice but to target Michael next.

At the immunity challenge, everyone with long enough hair has space buns and I’m confused about how they can all achieve this look with no hair brush or products, whereas I can’t even get even space buns with all of my hair care arsenal at my disposal. They all look extremely cute though and I am happy for them. As mentioned, New Angela dominates the classic gross-eating contest which I’m so happy they’ve brought back because it is fun and historic and fair. She wins immunity and plans are set into motion. Kellyn wants to split the votes 5-4 between Michael and Libby, leaving Donathan and Laurel with the option to flip and go with the original Malolos to target whoever they want, most likely Wendell by Michael’s plans.

At tribal, Sebastian mixes up the words “connoisseur” and “entrepreneur” in his weekly ramblings, and Jeff attempts to give the new final tribal council format credit for allowing people to explain their games at the end, even if they weren’t the most out-in-front strategic games. The idea that this was not possible in the old final tribal council is patently ridiculous, and Jeff continues to enjoy patting himself on the back for absolutely no reason. The votes are cast and Michael winds up playing his idol, though Wendell does not. He winds up receiving a majority of the votes, sending Libby out with just the four from the split. As much as I wanted to see Michael go out here because watching a bunch of dudes wave their idols around and get all the screen time is boring, and also because Michael has zero charisma and if he weren’t 18 and his parents didn’t buy him a real estate job there would be absolutely nothing notable about him, I at least try to find solace in the fact that he is at least unprotected – down an ally and an idol. Unfortunately this does not provide much comfort because I know that not only will he find another idol in the next episode, given precedent, but he will also find three more when he’s invited back for the next two all stars seasons. Though I feel Libby had little to contribute to the game, it’s always a bummer to see the right-hand girl go out simply because of her relationship with a more threatening male. However, much of the sympathy I felt for her quickly waned when in her parting words she whined that her name came up “randomly” and she was voted out for no reason after doing everything she could. Crying “it’s not my fault” is not a likable look on the way out, and I hope she and Chris have a great time at Ponderosa doing a photoshoot for the Swedish board of tourism and working as a team to try to put together a single original thought. I will not be watching that thrilling saga. See you next week on Survivor: Dude Island!