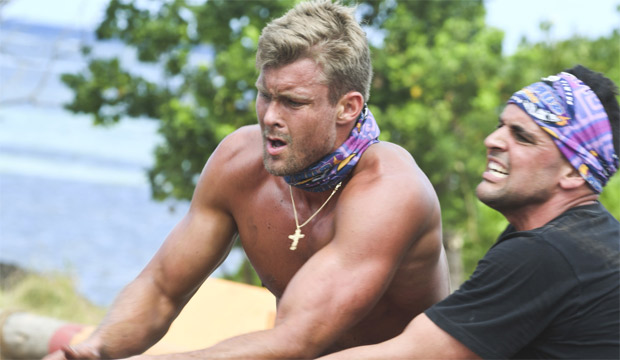 It is not my favorite experience when I watch friends and peers around me titter with excitement over an episode that I found okay at its best, and maddening at its worst. This is one of those episodes where I look around and take stock of what I value in my favorite show, and how that sometimes starkly differs from the priorities of those around me. It wasn’t a bad episode, and I can certainly understand where the reaction is coming from. The editing was fun, with the back and forth between Chris and Dom being a unique spin on the he-said-he-said that would ultimately come right out at tribal council in front of everyone. The narcissism of Chris coupled with his ultimate demise at the hands of his own hubris, further buried by Wendell’s cutting confessional while casting his vote, could be construed as satisfying, if it weren’t so heavy-handedly telegraphed. He literally said, “I won’t go home with an idol in my pocket.” I understand that the edit was trying to make him look as stupid as possible, even at the cost of sacrificing any suspense, but is Stupid Guy Who No One Expected to Win Anyway Gets Comeuppance really a headline worth dedicating an entire episode to, shutting out any possibility of setting up future plotlines or explaining other relationships in the game? There are 13 people on the beach, and this episode gave us details about exactly two of them, one of whom is now gone. There is a difference between giving the episode’s boot visibility, and making him one of only two characters that exist in a field of 13.

Above my distaste for the idol-measuring contest of two loud mouth dudes that I don’t find to be smart, good players, or particularly engaging, I found this feud extremely boring. The back-and-forth edit perhaps would have been amusing if they had been equally-matched. Perhaps if they had attempted to humble Domenick in the same way as Chris, or made it seem like Chris’s plan had any shot of working against Domenick, it would have been more exciting. To simply watch a capable enough player in Domenick, armed with an even more capable number two in Wendell, and a reasonable collection of allies, continuously beat on a veritable moron with no friends and no vote, felt so repetitive. It’s not that I feel bad for Chris, it’s just that this got old really fast. “Haha, this guy is dumb,” is barely a funny joke once, let alone over and over again for 43 minutes. The show’s best effort to balance this was to give a flimsy notion from Desiree about wanting to get out Libby, clearly serving as a continuation of the token confessional per episode about how Libby is a huge threat so that we remember who she is when she’s voted out in the next couple of weeks, and a comment from Jenna to remind us that she is a person who exists. The only woman who had more than one confessional was Kellyn, so apparently it takes having an advantage and winning individual immunity to even be acknowledged as a female character. Merge episodes are generally a time for exploring new relationships or shifting dynamics within existing relationships, to set up the chess board for the latter half of the game. I have no idea how anyone feels about anyone right now. We know there are still alliances in play from original Malolos and Navitis, but I want to know where individuals’ heads are at, who they are looking at as targets, and who is thinking about finally crossing enemy lines. I don’t want to know “suav-ay” Chris thinks he is for the millionth time.

Though it doesn’t end up mattering, I suppose we should talk about the implications of Chris’s advantage in case it ever comes up again. He “randomly” found a note in his buff saying that a boat would take him to Ghost Island in the night where he will find JT’s idol, which he can only use that night unless he wagers his vote to extend its power. Each time he takes the bet he has a 50/50 chance of either losing his vote or extending the idol’s ability by one tribal council. When he originally got there, I thought he almost certainly should not take the chance. What if, by some miracle, people decided to go along with Chris’s plan but they needed his vote in order to do it? You could really screw yourself over by telling your alliance you’re voting with them without actually having a vote to offer. Future Survivors: Almost definitely don’t do this unless you are so confident that you are in a vast majority that you won’t even need a vote. It also was Chris’s ultimate demise, because if the idol had only lasted for one tribal even he would have known he must play it just in case. It’s important to have options in Survivor, but sometimes, especially if you’re an idiot, having no choice is the best possible thing for your game!

The only other morsel of strategy we see besides Chris taking a group the size of the cast of Avengers: Infinity War to the well to talk about “blindsiding” Wendell and Domenick is Domenick talking to Laurel and Donathan about voting out Chris, and Donathan warning him explicitly not to loop in Libby and Jenna on the plan because they aren’t trustworthy. This is interesting! Too bad we don’t get to hear anyone talk about it or hear Donathan speak at all in confessional.

At tribal, we are reminded of the origin of Domenick’s feud with Chris at the first challenge which I forgot about primarily because I don’t care at all. Wendell tells Chris to stop rapping because he’s trash which is true and is also extremely gratifying to hear from a black man speaking to a white man. On that note, I would like to slip in a controversial take that Chris’s rapping Ponderosa video is stupid and not funny because I enjoy being a grouchy old woman who ruins the fun of the youths. The video is cringeworthy and awful and that’s all I will say on the matter. This crisis of masculinity ends in Dom burning his legacy idol, but don’t worry because he still has eighteen more, and Chris not using his idol at all and getting bounced out here. I look forward to next week where maybe we’ll learn the back stories of some of these background actors they hired to sit at tribal council and hang out around camp. I hear there’s a Sebastian on this season, maybe we’ll meet him!